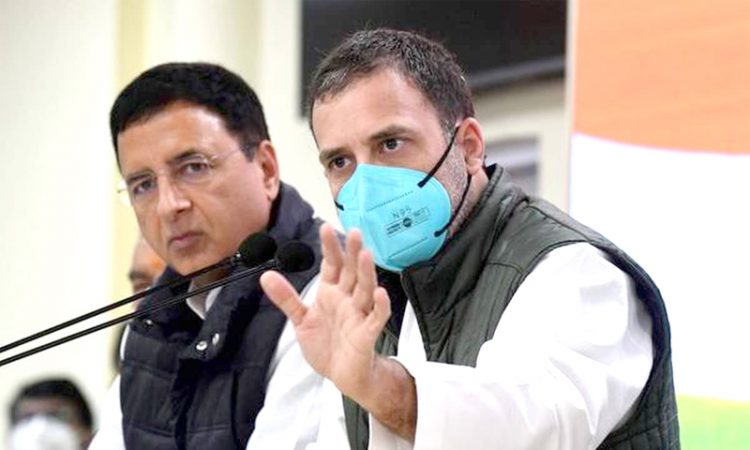 New Delhi, January 19: Providing official secret information to a journalist is a “criminal act” and both the giver and the receiver will have to go to jail, Congress leader Rahul Gandhi said on Tuesday referring to the purported WhatsApp chats of Republic TV editor-in-chief Arnab Goswami doing the rounds of social media.

Addressing a press conference, Gandhi said only five people — Prime Minister, Defence Minister, Home Minister, Air Force chief and National Security Advisor — were privy to the information, referring to allegations that the reported chats showed Goswami being privy to the Balakot air strikes beforehand.
“Information was with 4-5 people. In such missions, information is not given to the pilot, it was with the Air Chief, Prime Minister, Home Minister, Defence Minister and NSA. Out of these five people, one has given information to this person. This is a criminal act. We will have to find out who did it, and both (the giver and the receiver) will have to go to jail,” he said.
“This process should start, but this process will not start because the prime minister may have given the information,” he alleged.
Addressing a press conference here, Gandhi said, “The law will take its own course, but I have an observation. This was top-secret information, this was not provided to anybody else.”
“Giving official secret information to a journalist is a criminal act, both on the part of the person who accepted it and on the part of the person who gave it,” he said.
These people call themselves patriots, but there is nothing patriotic about putting the Air Force at risk, the Congress leader said.
He said there is nothing patriotic about taking political advantage over the strikes.
“If Mr Arnab Goswami knows, if it is on his WhatsApp, I assume the Pakistanis also know it. It is not a very big jump. It is a criminal act and that investigation should begin,” Gandhi said.
Referring to the contents of the purported chats, Gandhi said the distressing thing is that after the 2019 Pulwama attack, the journalist said that “this is good for us”.
“This is a reflection of the mind of the prime minister that it is good that 40 of our people have been killed and we will win the elections,” he alleged.
On February 26, 2019, India had launched airstrikes on what was said to be JeM’s training camp in Pakistan’s Balakot. (PTI)