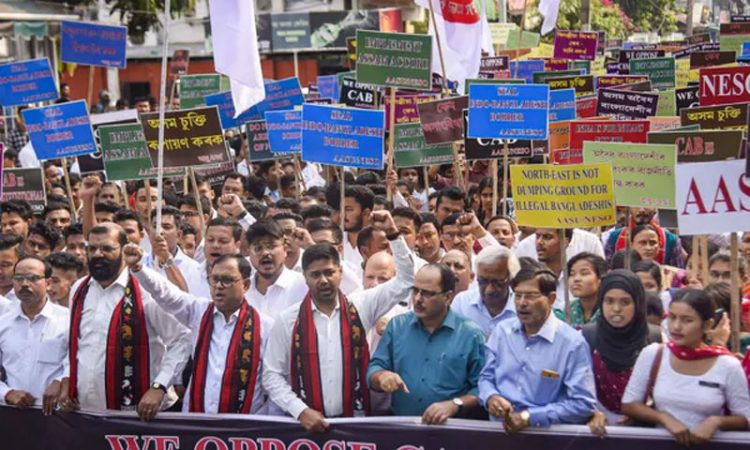 Guwahati/Shillong/Aizawl/Itanagar/Kohima, November 18: Protests were held in the north eastern states on Monday opposing the proposed Citizenship (Amendment) Bill and effigies of Prime Minister Narendra Modi were burnt in Assam.
The protest rallies coincided with the first day of the winter session of Parliament during which the bill is proposed to be introduced.
Sit-ins were also launched in various places of Guwahati and effigies of Assam Chief Minister Sarbananda Sonowal were burnt by youth organisation AJYCP in different parts of the state as a mark of protest against the CAB.
The protests were held by the North East Students Organisation (NESO), the region’s umbrella organisation of students unions, its constituents, farmers’ body Krishak Mukti Sangram Samiti, youth body Assam Jatiyatabadi Yuba Chatra Parishad (AJYCP) and Left-Democratic Mancha, Assam among others.
NESO submitted a memorandum to Prime Minister Narendra Modi and Union Home Minister Amit Shah against CAB through the governors of the north eastern states.
The NESO and AASU along with other organisations took out a large rally from its headquarters at Uzan Bazar in Guwahati to the Raj Bhawan shouting slogans and waving banners and placards against the CAB.
“Assam and the north east are not dumping grounds for illegal Bangladeshis. As per the Assam Accord we have already accepted all Bangladeshis – both Hindu and Muslims who entered Assam illegally upto 1971. We will not accept those who entered Assam after that year,” NESO and AASU chief advisor Samujjal Bhattacharyya said.
“The central government is trying to impose on Assam all the illegal Bangladeshis who entered the country in the next 43 years by fixing the cut off year as 2014. We won’t accept that. We oppose it,” he iterated.
“This movement in Assam and the north east region will continue”, he asserted.
Commenting on the contention of Assam minister Himanta Biswa Sarma and other BJP leaders that a lot of problems will be solved if the CAB is enacted, Bhattacharya said “The Bill will safeguard the vote bank of BJP. They(BJP) want the votes of illegal Bangladeshis. They have the numbers in Delhi (Parliament) and they will impose the CAB on us.
“We will not accept CAB and that is why we have launched our agitation against the Bill,” he added.
AASU president Dipanka Nath said, “The CAB is the death knell for the Assamese community. It will make the Assamese people extinct. It will open the door for more Bangladeshis to enter Assam.”
Claiming that Assam has rejected the CAB, Nath said “We will oppose till our death this Bill, which is harmful to the existence of the Assamese community”.
AASU general secretary Lurinjyoti Gogoi said that Assam and Tripura have taken the largest burden of illegal Bangladeshis.
“Imposition of CAB in the north east is unacceptable to its people as their sentiments have been ignored despite the public rejecting the bill,” he added.
In neighbouring Meghalaya Khasi Students Union, an influential students body in the state, held a sit-in near the third secretariat here protesting against the contentious bill, which it said, will have a negative impact on the people of the entire region.
A group of anti-CAB protesters will launch a stay off the road protest from 7 pm on Monday till 6 am Tuesday.
State Chief Minister Conrad Sangma had met Shah last week and urged the Centre to consider withholding passing of the CAB in its current form.
A rally was taken out in Aizawl by the Mizoram apex students body Mizo Zirlai Pawl (MZP) on Monday in protest against the CAB.
The protestors said the Centre’s decision to introduce and pass the bill will create a huge demographic imbalance in the north east as millions of illegal immigrants from Bangladesh were residing in the area.
MZP leaders expressed the fear that the bill, if legislated would legalise thousands of Chakmas who had illegally migrated to Mizoram from CHT in Bangladesh.
It submitted a memorandum to Mizoram Governor P S Sreedharan Pillai at the Raj Bhavan stating its strong opposition to the proposed legislation of CAB and also demanded that the north eastern states be exempted from its purview.
In Itanagar, The All Arunachal Pradesh Students Union (AAPSU), a NESO constituent along with other students bodies of the state, held a protest march and demonstrated in front of the Raj Bhawan against CAB.
North East is not a dumping place for illegal migrants. Under no circumstances will CAB be accepted. Our protest against the anti-indigenous Bill will continue, AAPSU president Hawa Bagang said.
In Kohima the Joint Committee on Prevention of Illegal Immigrants (JCPI) has called for 18 hours Nagaland bandh on Tuesday on the issue.
JCPI convener K Ghokheto Chopi and secretary Tia Longchar in a statement said that as the CAB is to be tabled in the winter session of Parliament, the North East Forum for Indigenous People have directed all federating states’ organisations to initiate a united mode of agitation to oppose its passage.
“Once this contentious Bill becomes an Act it will forever change the demography of the entire North East states where the indigenous population will become minority in their own land like in Tripura,” the JCPI leaders aaid.
The committee requested the people of Nagaland to participate in the strike and asked all shops and business establishments to voluntarily down their shutters as a mark of protest.
The CAB was passed by the Lok Sabha on January 8 this year but was not tabled in Rajya Sabha and lapsed. It seeks to provide Indian citizenship to Hindus, Jains, Christians, Sikhs, Buddhists and Parsis from Bangladesh, Pakistan and Afghanistan after seven years of residence in India even if they do not possess any document.
During a recent meeting of BJP-led North East Democratic Alliance at Guwahati, Shah, who is also the party’s president, had said the concerns of the north eastern states will be incorporated in the CAB and had sought suggestions on it.(PTI)