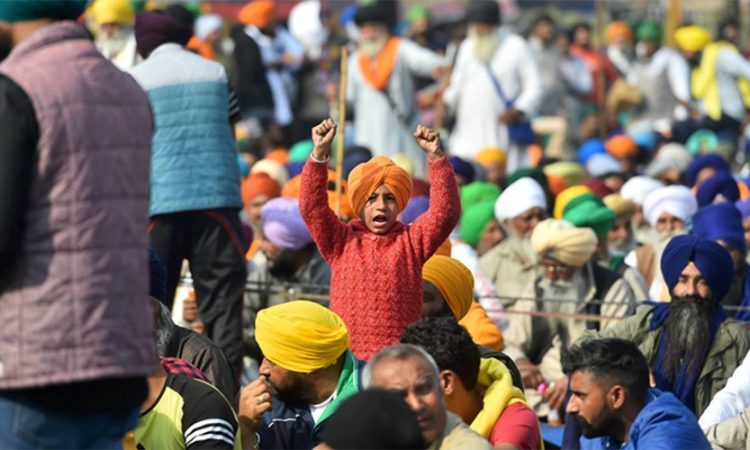 New Delhi, December 10: Farmers agitating for the past two weeks against the new agri laws on Thursday announced that they will block railway tracks if their demands are not met by the government.

Farmer unions, which held a meeting on Thursday, said they will soon announce a date for blocking tracks across the country.
Addressing reporters at the Singhu border where they have been protesting for almost two weeks to demand a rollback of the laws, the farmer unions also reiterated that they will intensify their agitation and start blocking all highways leading to the national capital.
“We will block railway tracks if our demands are not met. We will decide on the date and announce it soon. The blocking of tracks will not be limited to Haryana and Punjab but it will be done across the country,” farmer leader Boota Singh said at the press conference.
The announcement by farmers came on a day Union Agriculture Minister Narendra Singh Tomar said it was not proper to announce the next stage of agitation when talks were continuing and urged the unions to return to the discussion table.
Tomar also urged farmer union leaders to consider proposals sent to them to break the deadlock over protests and said the government is ready for further discussions with them any time.
“Centre has admitted that laws have been made for traders. If agriculture is a state subject, the central government does not have right to make laws on it,” said Balbir Singh Rajewal, another leader.
Thousands of farmers have been protesting at various border points for almost two weeks seeking a repeal of the new agri laws, which they claim were aimed at benefitting corporates by weakening the mandi system and the minimum support price (MSP) regime for procurement of farm produce.
The government had on Wednesday proposed to give a “written assurance” that the existing MSP regime for procurement will continue.
However, the farmers’ unions rejected the proposal and said they would intensify their agitation until the government accepts their demand for a complete repeal of the three laws.
The government has also proposed to make necessary amendments on at least seven issues, including one to allay fears about the weakening of the mandi system.
“Five rounds of talks have already been held with the government, but they remained inconclusive. So far, the government has not sent us any invitation for another round of talks. If government sends us proposal for a meeting, we will decide it in our meeting,” another farmer leader Shiv Kumar Kakka told PTI.
Asked about solution to ongoing standoff with the government, Kakka said, “only God knows.”
“We are facing a lot of difficulties due to cold weather and the COVID-19 pandemic, but despite this, we will continue our protest until our demands are met,” Kakka also added.
Meanwhile, Chandigarh-based farmers’ organisation AIKCC, not one of the 40 unions that are protesting at Delhi borders seeking repeal of the farm laws, on Thursday welcomed the government’s gesture to keep the dialogue open with farm leaders.
B S Mann, founder of Bhartiya Kisan Union and chairman of All India Kisan Coordination Committee (AIKCC) — that represents 20-odd state level farmer organizations — said the committee’s suggestions made to the government in June for some changes in the three farm laws have “prima facie” been accepted.
“It was noticed by the national committee that all the suggestions were prima facie accepted by the government which will lead to end this current stalemate,” AIKCC said in a statement.
It was also observed that the government should announce slew of reforms in regulation in the follow up of less government and more governance, it said. (PTI)