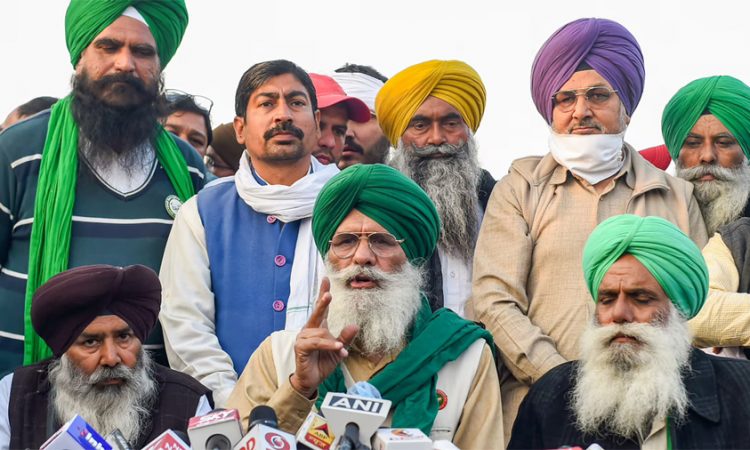 New Delhi, November 29: Rejecting the Centre’s offer to hold talks once they move to the Burari ground, agitating farmers who have been staying put at Delhi’s borders for four days said on Sunday they will not end the blockade and will continue their stir against the new farm laws.

After a meeting of over 30 farmer groups on Sunday, their representatives said they will not move to the Burari ground as it is an “open jail”. They said the farmers will not accept any conditional dialogue and will block all five entry points to Delhi.
“The condition laid down by Home Minister Amit Shah is not acceptable to us. We will not hold any conditional talks. We reject the government’s offer. The blockade will not end. We will block all five entry point to Delhi,” Surjeet S Phul, Bhartiya Kisan Union’s Punjab president, told reporters.
“The condition put for talks is an insult to farmers. We will never go to Burari. It is not a park but an open jail,” he added.
After spending another night in the cold, thousands of farmers continued to protest against the Centre’s new agri laws on the fourth consecutive day on Sunday, staying put at the Singhu and Tikri border points.
“We do not accept the condition of their (govt) proposal. We are ready to talk but will not accept any condition now,” said Gurnam Singh Chadhoni, Haryana unit president for the Bhartiya Kisan Union.
Darshan Pal, Punjab president of Krantikari Kisan Union, said, “The government has invited us to talk with conditions. The environment should be created for a conversation. We will not talk if there are any conditions”.
Union Home Minister Amit Shah had appealed to the farmers to shift to the Burari ground and had said the Centre was ready to hold discussions with them as soon as they move to the designated place.
A delegation of the farmers has been invited for a discussion on December 3, he said, adding now that some of their unions have demanded that talks should be held immediately, the central government is ready to do so as soon as the protesters shift to the ground in Burari.
“If the government is serious about addressing the demands of the farmers, it should stop laying down conditions, should stop assuming that the dialogue can be about an explanation to farmers about the benefits of the Acts,” said a representative of the All India Kisan Sangharsh Coordination Committee (AIKSCC), an umbrella body of farmers’ groups.
Joginder Singh, president of Bhartiya Kisan Ektagrah, “We are sitting at the borders. Our demand is that the government take back the farm laws and we will not accept anything less than that”.
Raising slogans against the government, the farmers staged protests at the border amid heavy police presence. The Delhi Sikh Gurudwara Management Committee (DSGMC) offered food to the agitating farmers.
“In any situation, we will not call off the protest till our demands are met,” Brij Singh, one of the farmers at Singhu border said.
Meanwhile, farmers who had reached Nirankarai Samagam Ground in Burari on Saturday continued their protest there.
Punjab Chief Minister Amarinder Singh has also termed Shah’s offer to hold discussions at the earliest as the best in the interest of the farming community and the nation at large.
On Saturday, he had urged the farmers to accept the appeal and shift to the designated place for their protest.
The farmers have come prepared for a long haul, their vehicles loaded with rations, utensils, quilts and blankets for the cold and equipped with even charging points for their phones.
Gaurav Sharma, Deputy Commissioner of Police (Outer North), said they are allowing vehicles carrying food and other necessities for farmers to pass.

“Burari DDA ground has already been designated as the protest site and when they want to move, we will be facilitating their movement,” he said.
On Friday, police used teargas shells, water cannons and multi-layer barriers to block the protesters.
Some protesters pelted stones and broke barricades.
No untoward incident was reported on Saturday. But the tension persisted with restless crowds milling around the city’s edges and beyond and settling down from another night out in the cold. (PTI)