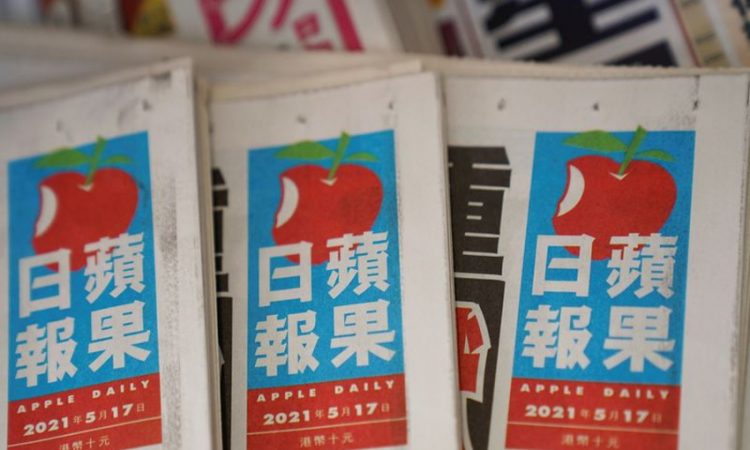 HONG KONG, JUNE 22: The pro-democracy Hong Kong newspaper Apple Daily looked set to close for good by Saturday following police raids and the arrest of executives ~ a move that rights groups say would undermine the city’s reputation as a free and open society as Beijing tightens its grip.

An adviser to the jailed owner and staunch Beijing critic Jimmy Lai told Reuters on Monday the newspaper would be forced to shut “in a matter of days”.
In an internal memo to staff seen by Reuters, the Apple Daily said: “The Board will decide on Friday whether (the company) will continue to operate.”
“If the board decides not to continue to operate on Friday, online will stop uploading at 23:59 p.m. on the day, newspaper will cease operation after publishing the June 26 edition.”
Apple Daily and Next Digital management could not be reached for comment.
Owned by Lau’s Next Digital, Apple Daily is a popular tabloid founded 26 years ago that mixes pro-democracy discourse with celebrity gossip and investigations of those in power. It has been a strong critic of the Hong Kong and Beijing Governments.
Police raided the newspaper last week in a national security investigation in which senior Apple Daily executives were arrested for alleged “collusion with a foreign country” and assets of 3 companies linked to the newspaper were frozen.
Late on Monday, Hong Kong media reported that Apple Daily and its online edition would cease operations by Wednesday as most of its employees had resigned.
The looming demise of Apple follows the imposition of national security law on the former British colony last year in response to mass pro-democracy protests in 2019, and concern in the West that Beijing is stifling freedoms and taking greater control over the semi-autonomous city, a trade gateway and financial centre.
Police have said dozens of Apple Daily articles were suspected of violating the new security law ~ the first case in which authorities have cited media articles as potentially violating the contentious legislation.
Editor-in-Chief Ryan Law and Chief Executive Officer Cheung Kim-hung were charged with collusion with a foreign country and denied bail on Saturday. Three other senior executives were also arrested on Thursday and released pending further investigation.

Three companies related to Apple Daily are being prosecuted for collusion with a foreign country and authorities have frozen HK$18 million ($2.3 million) of their assets.
The company said in the memo the board had sent a letter to Hong Kong’s Security Bureau to ask that some assets be unfrozen in order for it to avoid violating labour laws by failing to pay staff. The company asked the Security Bureau to reply by Friday.
The Security Bureau said on Monday it would not comment on case details due to ongoing legal proceedings and any application related to the frozen property would be handled according to the law.
“Endangering national security is a very serious crime”, it said in a statement to Reuters.
The newspaper said in a Sunday article that it was considering challenging the decision to freeze assets in courts, should the Security Bureau reject the request.
The office of the city’s Chief Executive did not respond to a request for comment on Monday. Beijing’s chief representative in the city, the Liaison Office, also did not respond to requests for comment. (Agencies)