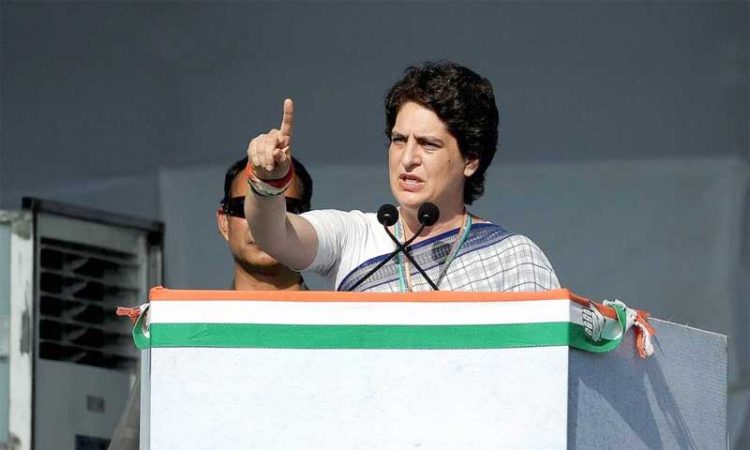 Ahmedabad, March 12: Congress general secretary Priyanka Gandhi Vadra Tuesday targeted the Modi government over “unfulfilled” promises and “destruction” of institutions and said she was saddened by what was happening in the country.
Addressing her first political rally in Gujarat after assuming charge as Congress general secretary in early February, she advised people to be vigilant, treat their vote as a “weapon” and ask right questions.
“Our institutions are being destroyed. Wherever you see, hatred is being spread.
“Nothing matters more to us that you and I protect this nation, work for it and move forward together,” the Congress leader said.
“I am saddened by what is happening in our country today. I want you all to be more aware. That is the best sign of patriotism.
“Your vote is your weapon. You are not supposed to harm someone with that weapon. But it will make you stronger,” she said.
Congress president Rahul Gandhi and UPA chairperson Sonia Gandhi were present at the rally near Adalaj village of Gandhinagar district.
In her address, she asked people not to fall prey to “meaningless issues” and asked them to broach the right questions.
“You are going to decide your future in this election.
Don’t fall prey tomeaningless issues. Focus on issues that will make you grow, like how youth will get jobs, how women will feel safe and what should be done for farmers,” she said.
Launching an attack on the Modi regime in the prime minister’s home state, Gandhi Vadra said it did not “fulfil” its promises of providing jobs to crores of people.
“You need to take decisions wisely. Question those who made tall promises. Ask what happened to the promise of creating two crore jobs.
“What happened to the promise of depositing Rs 15 lakhs in your bank accounts?” she said.
The Congress leader said it is the nature of this country to convert hatred into love and compassion.
On the ensuing Lok Sabha polls, she said people should raise the right issues and take wise decisions.
With this mega rally, the Congress sounded its poll bugle for the April-May Lok Sabha elections.
Earlier in the day, a meeting of the Congress Working Committee (CWC), the party’s highest decision-making body, was held in Gujarat after a gap of 58 years.
The last CWC meeting in Gujarat was held at Bhavnagar way back in 1961.(PTI)