HomeTop StoriesPriyanka Gandhi alleges manhandling by UP cops: ‘They held me by neck, pushed me, I fell down’
Top Stories
2 years agoDecember 28, 2019No tags 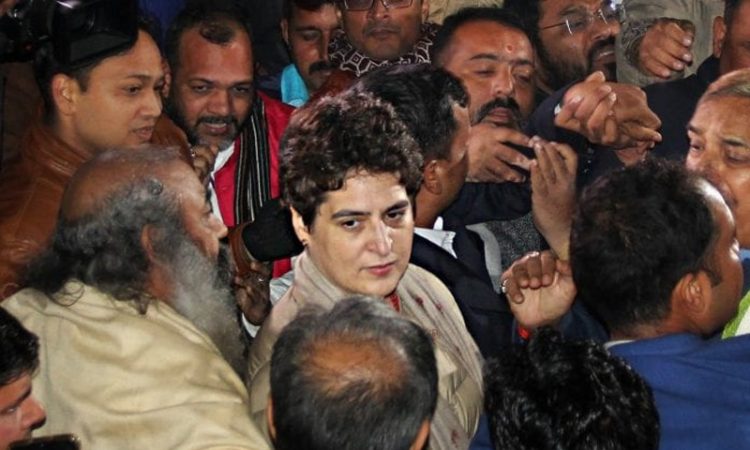 Lucknow, December 28: A high-voltage drama unfolded here on Saturday evening as Congress leader Priyanka Gandhi Vadra alleged she was manhandled by police personnel who grabbed her by the throat and pushed her when she resisted their attempts to stop her from visiting the residence of retired IPS officer SR Darapuri, arrested in connection with the recent anti-CAA protests.
“They do not have the right to stop me. If they want to arrest me, they should do so,” Priyanka told reporters after meeting Darapuri at his Indiranagar’s sector 18 residence. She accused the BJP government of acting in a cowardly manner.
The state police denied the allegation as “false”, while an angry Congress, at a press conference in Delhi, slammed the police action and demanded imposition of President’s Rule in UP.
Narrating the sequence of events, Priyanka told reporters, “As we were on our way, a police vehicle came and the policemen said you cannot go. I asked them ‘why’. And was told that we will not be allowed to move ahead,”
“I got off the vehicle and started walking. I was surrounded and a woman cop held me by my throat. Another woman cop pushed me and I fell down. I was forcibly stopped and a woman officer pulled me up by my neck. But I was determined. I am standing with every citizen who has faced police oppression. This is my ‘satyagraha’.”
Archana Singh, Circle Officer, Modern Control Room Lucknow, who was deployed in security duty, said the allegations of manhandling the Congress leader and grabbing her by neck are “false”.
UP Congress spokesperson Ashok Singh told PTI, “Priyanka’s vehicle was stopped at the Lohia crossing. She protested and asked as to why was she being stopped.”
Singh said that after being stopped, she started walking and the policemen started following her. “After walking for almost a km, she again got into her vehicle. After this, when the police tried to stop her in Munshipulia area, she again started walking and then suddenly turned towards a bylane in Indiranagar’s sector 18. She walked for almost 3-4 kms and gave the police and party workers a slip,” he added.
Priyanka told reporters the police action led to traffic snarls. “There is no reason to do so. God knows, ask them why have they stopped (us).”
“What is the reason for stopping us, that too in the middle of the city? This is not an issue of the SPG, but of the Uttar Pradesh police. There is no point stopping us. Will you stop (anyone) in the middle of a crossing?,” she asked a police official.
Attacking the Yogi Adityanath government, she said it was working in a “cowardly manner”. “I am the in-charge of eastern UP Congress and the government is not going to decide where will I go in the state.”
Addressing a press conference in New Delhi, Congress leader Sushmita Dev said Priyanka was acting as a responsible leader. Dev said there is “a complete goonda raj and there should be President’s rule in the state”.
After meeting Darapuri’s family members, Priyanka told reporters, “I was going in a peaceful manner, how was the law and order scenario going to get deteriorated? I did not tell anyone about this (visit) so that not more than three persons accompany me. They do not have the right to stop me. If they want to arrest me, they should do so.”
To a question on whether the government felt its politics was in danger because of her, she said, “Everybody’s politics is in danger.”
UP Congress chief Ajay Kumar Lallu said, “The government is feeling scared of Priyankaji. Hence, she was stopped.”
Later in a statement issued here, the Congress said, “Police cars came in speed and blocked the car of Priyanka Gandhi Vadra. Priyankaii’s car had a close shave. Then the police tried to stop her and called more police force.”
The statement alleged, “There were only two women police personnel and all male police personnel were also trying to stop her physically.”
Earlier in the day, addressing party leaders and workers during a programme held here to mark the 135th Foundation Day of the party, Priyanka virtually equated the BJP government with the British.
“Today in the country, there are such powers in the government with whom we had a historical clash. We are at present fighting an ideology against which we fought during the freedom struggle,” she said at the UP Congress headquarters.
“Today the country is in trouble. If we do not raise our voices, we will be proved to be cowards.”
It was her first visit to the state capital after violent protests against the amended citizenship law and a proposed countrywide implementation of the National Register.
She alleged the BJP makes laws which are against the Constitution and then suppresses those who oppose it.
“People were killed in the country, including in Uttar Pradesh, and those who could not be killed were put in jails. Their only fault was that they were raising voices against a wrongdoing,” she said, referring to protests against the and CAA and NRC.
Targeting the central government, she said that those in fear either resort to violence to silence the enemy or retreat.
Hitting out at rival political parties in the state, though without naming them, she said, “Other opposition parties in the state are not saying much. They are feeling afraid or there is something else, which I don’t know. But, we are not going to feel afraid.” (PTI)