Priyanka Chopra: Jonas family is obsessed with Game of Thrones 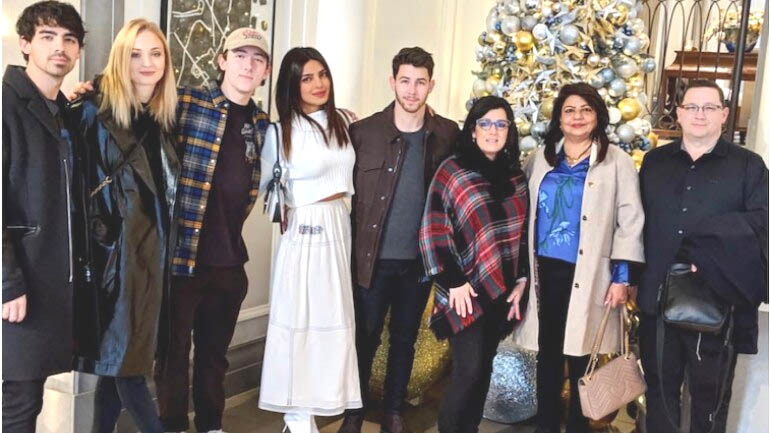 Priyanka Chopra recently revealed that all her in-laws – the whole of Jonas family – are big fans of Game Of Thrones. Priyanka’s sister in-law Sophie Turner plays Sansa Strak, one of the lead characters in the show.
Talking about how the Jonas family watches episodes of Game of Thrones together, Priyanka told AP Entertainment, “I am married to a Game of Thrones family, I guess. Whenever we are in town together, we try and do it together. The last episode, I wasn’t in town but I think everyone in the family got together, like 15 people, and watched the episode.”
She added, “My husband is a huge, huge fan and I think that’s Sophie is so amazing in the show that we have to keep watching it and it just gets you. So yeah, I love Game of Thrones. I can’t wait to find out… I am so sad, it’s getting over now.”
Priyanka and Sophie share a great equation and the two are often seen rooting for each other on social media. In fact, Priyanka took to Instagram to wish Sophie good luck before the premiere of the final season’s first episode.
She wrote, “Good luck @sophiet you are a boss babe. And are very loved.. #jsister #gameofthrones tonight.”
Priyanka was also present at Joe Jonas and Sophie’s wedding last week. Earlier, in an interview with Access, Priyanka revealed the details of Joe and Sophie’s wedding on May 1, right after the Billboard Music Awards.
She said, “It was really funny. We were at the Billboards. Joe, I think, had this idea that he wanted to do this. We were at the Billboards and he had these little black cards that we all got. We were randomly inviting our friends, people that we met. We were like, ‘Alright, we’re going to set up this wedding now, we’re going to the chapel right from here, and please arrive.’ We had Diplo, Khalid, they were really sweet, they arrived. Diplo Instagram Live-d the whole thing, it was awesome.”
On the work front, Priyanka will next be seen in The Sky Is Pink opposite Farhan Akhtar.