Sign in
Home Top Stories Primary education should be in mother tongue: Guv

Primary education should be in mother tongue: Guv 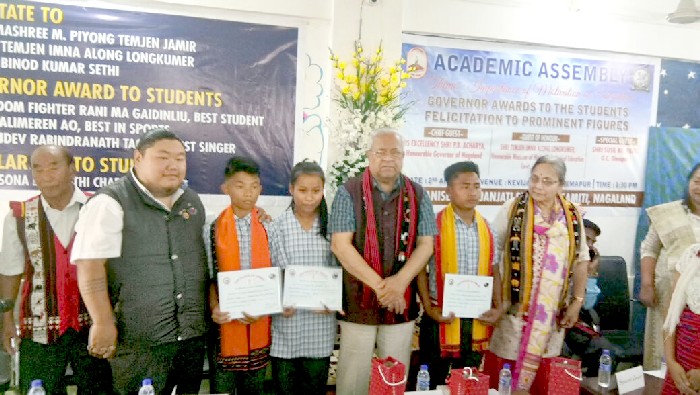 Dimapur, April 2: Reacting to the fact that Piyong Temjen Jamir, the principal of Rashtrabhasha Hindi Shiksha Sansthan, Padum Pukhuri, Dimapur, who was awarded the Padma Shri, India’s fourth highest civilian honour for literature and education in the month of January 2018 is yet to be formally received by his village, Governor of Nagaland PB Acharya on Monday said that there is a need for people to change their mentality and recognise the good deeds of Jamir.
He was speaking as the chief guest on the occasion of an ‘academic assembly and felicitation to prominent personalities, governor award and scholarship to student programme’ organised here at the premise of Janjati Shiksha Samiti (JSS), Kevijau Village, Dimapur on the theme ‘importance of motivation in education’ where minister of higher and technical education Temjen Imna Along Longkumer was the guest of honour.
Speaking on the occasion, Acharya said that the educational system of India is based on what British had outlined which promotes knowledge that makes people self-centered when knowledge should make them realize their debts for the society and country. It is also leading to vanishing of the indigenous languages, he added.
He said that English is highly favoured in the country when it should be the contents of the speeches that should really matter and not in which language the speeches have been made. He advocated that primary education should be made compulsory in mother tongue.
Commenting on the condition of education in the state and country, he said that the students graduating are not employable and degrees like B.A., B.Com. and B.Sc. have become redundant and thus there is a need for skill development for which PM Modi has been working and called for a need for dialogue between industries and universities about the kind of graduates needed.
Talking about the state of education here, he said that there are government schools in the state where teachers are not going to take classes and instead hire proxies for a fragment of their salaries, and at the same time warning the private schools to refrain from running profiting business in the name of education.
Temjen Imna Along Longkumer in his speech also had expressed his sadness over the treatment of Piyong Temjen Jamir by his village and said that learning and teaching Hindi isn’t going to destroy the cultures of Nagas and being Indians, it is necessary for people to learn Hindi.
He said that while Nagaland is enjoying all the benefits of this country, it is also time that people should join hands and work towards an integrated India.
He said that there is a lack of motivation among the students and faculty of the educational institutes in the state and added that he was much impressed by the functioning of JSS.
Mentioning that the government schools need to match up with the private institutions in the state, he said that it is necessary not for the sake of competing with the private players but because the poor needs better education while paying less money.
He said that education is the single factor that has the capacity to transform the entire state for good.
DC Dimapur, Sushil Kumar, who was also one of the special guests in the programme said in his brief remark that there is no shortcut for success and the Minister Temjen Imna is one such person who had to face lots of problems before becoming what he is now. He said that every child is a hero but there is a need for them to find their potentials.
During the programme, the Governor awarded three students, Maithang Langthasa (Gurudev Rabindranath Tagore Award in the field of music), Khasrindi Jidung (Freedom Fighter Rani Ma Gaidinliu Award in the field of academics) and Derjet Phonlo (Dr. Talimeren Ao Award in the field of sports).
Besides, four children were also given scholarships by Soha Devi Sethi Charitable Trust. (Page News Service)