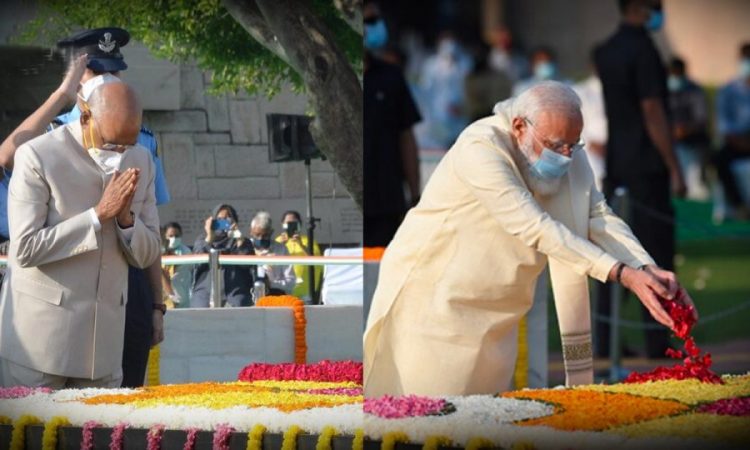 New Delhi, October 2: President Ram Nath Kovind and Prime Minister Narendra Modi on Friday paid floral tributes to Mahatma Gandhi, the father of the nation, on his 151st birth anniversary at Rajghat here.
They also paid homage to former prime minister Lal Bahadur Shastri on his birth anniversary at Vijay Ghat.
Modi in his tributes to Mahatma Gandhi said there is much to learn from his life and thoughts.
May Bapu’s ideals keep guiding us in creating a prosperous and compassionate India, he said.
President Kovind was accompanied by Delhi Chief Minister Arvind Kejriwal as they paid tributes at Shastri’s memorial at Vijay Ghat.
An interfaith prayer was held and Mahatma Gandhi’s favourite bhajans “Vaishanv Jan To” and “Raghupati Raghava Raja Ram” were rendered as dignitaries paid homage at his memorial at Rajghat.
Union ministers Hardeep Singh Puri and Gajendra Singh Shekahawt, senior Congress leader Ghulam Nabi Azad were among others who paid homage to the father of the nation at Rajghat. (PTI)