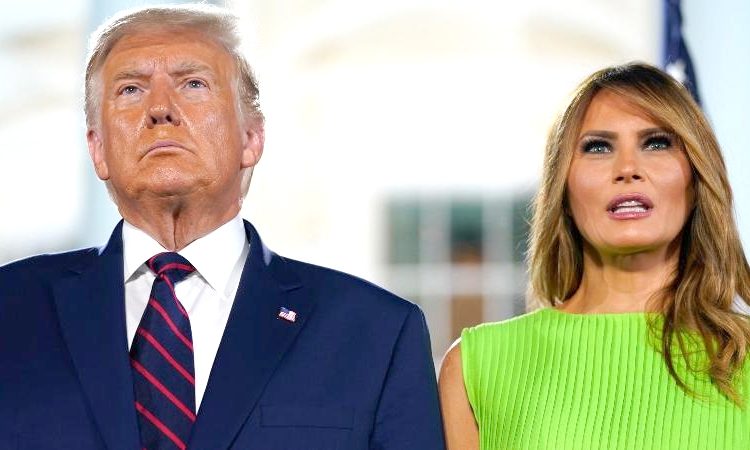 Washington, October 2: US President Donald Trump said on Friday that he and first lady Melania Trump have tested positive for the coronavirus, a development that is likely to affect his hectic election campaign just weeks before the presidential polls.
“Tonight, @FLOTUS and I tested positive for COVID-19. We will begin our quarantine and recovery process immediately. We will get through this TOGETHER! 74-year-old Trump tweeted.
In a statement, Trump’s physician Dr. Sean Conley said the president and the first lady “are both well at this time”, and they plan to remain at home within the White House during their convalescence.
“Rest assured I expect the President to continue carrying out his duties without disruption while recovering,” Conley added.
Prime Minister Narendra Modi and President Ram Nath Kovind wished Trump and the first lady a quick recovery.
“Wishing my friend @POTUS @realDonaldTrump and @FLOTUS a quick recovery and good health,” Modi tweeted. “Our prayers and best wishes are with you during this time,” Kovind said.
Trump’s physician said he received confirmation of the positive tests on Thursday evening.
“The White House medical team and I will maintain a vigilant watch, and I appreciate the support provided by some of our country’s greatest medical professionals and institutions,” Conley said.
Trump’s all engagements outside of the White House were cancelled. He was last seen in public on Thursday afternoon returning to the White House after a fundraising trip to New Jersey.
“As too many Americans have done this year, @potus & I are quarantining at home after testing positive for COVID-19. We are feeling good & I have postponed all upcoming engagements. Please be sure you are staying safe & we will all get through this together,” Melania, who is 50, tweeted.
Vice President Mike Pence said millions across America were praying for the full and swift recovery of the president and his wife.
“Karen and I send our love and prayers to our dear friends President @realDonaldTrump and @FLOTUS Melania Trump. We join millions across America praying for their full and swift recovery. God bless you President Trump & our wonderful First Lady Melania,” Pence tweeted.
Pence and Karen tested negative for COVID-19 on Friday.
His spokesman Devin O’Malley said Pence “remains in good health and wishes the Trumps well in their recovery.”
Trump’s “diagnosis amounts to the most serious known health threat to a sitting American president in decades,” the CNN said. “At 74 years old, Trump falls into the highest risk category for serious complications from the disease,” it said.
“His infection with the disease could prove destabilizing in an already fraught political climate, and stock market futures tumbled on news of Trump’s infection,” it added.
In the middle of the election campaign, Trump has been travelling a lot in particular in the battleground States. The development is likely to bring to standstill his hectic campaign for the November 3 presidential election.
On Tuesday night, Trump and his Democratic challenger Joe Biden had their first presidential debate. The second presidential debate is scheduled for October 15, which falls immediately after the mandatory quarantine period. The third and final debate is scheduled for October 22.
During the first presidential debate, Biden attacked Trump over the handling of the coronavirus crisis and said the president lied to Americans on the COVID-19 pandemic, which has killed more than 200,000 people and infected over seven million others in the country.
Trump had mocked Biden for regularly wearing a face mask in public. “I don’t wear masks like him,” Trump said, referring to the 77-year-old former vice president.
Biden, who shared the debate stage with Trump, is expected to get tested for coronavirus, CNN reported, citing a source familiar with his plans.
Biden wished Trump and his wife “a swift recovery .
“Jill and I send our thoughts to President Trump and First Lady Melania Trump for a swift recovery. We will continue to pray for the health and safety of the president and his family, Biden tweeted.
The White House issued a new schedule to reflect several cancelled events, including a campaign rally in Florida.
“The President hosts a phone call on COVID19 support to vulnerable seniors, said the new daily guidance from the White House.
Miles Taylor, former chief of staff at the Department of Homeland Security, said that President Trump having coronavirus sparks national security concerns.
“We have to consider the possibility that this may affect, again, his ability to carry out the duties of his office. That’s a big concern. It’s something that this White House wasn’t preparing for, in my view,” Taylor told CNN.
Trump and Melania were tested for COVID19 hours after one of their close aides, Hope Hicks, tested positive for the coronavirus.
Hicks, 31, is the closest aide of the president to have tested positive with coronavirus. She had travelled with the president on Air Force One early this week.
Trump, in an interview to Fox News on Thursday night, said he and the first lady spend a lot of time with her.
In a statement, Deputy White House Press Secretary Judd Deere said that the president takes the health and safety of himself and everyone who works in support of him and the American people very seriously.
Several White House staffers have tested positive with COVID-19 in recent months, inc. (PTI)