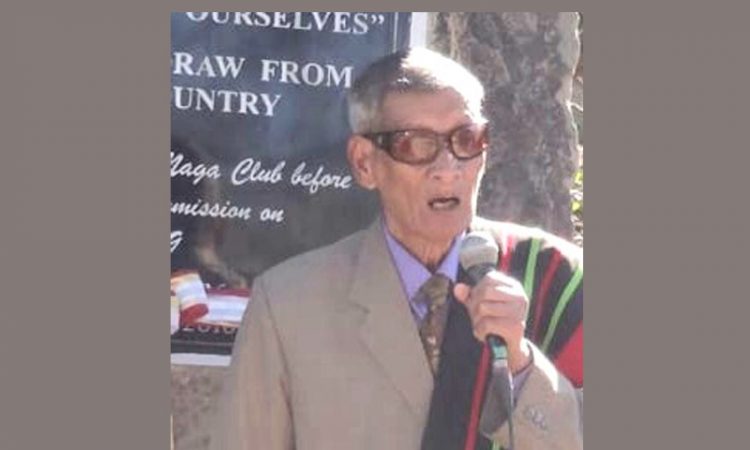 Krurovi Peseyie was born just before the outbreak of the Second World War to late Nikhrielhu Peseyie and late Medono on January 26, 1937 and served the Naga Society in various capacities.
He enlisted in the Indian Army in 1957 and served the nation till 1962. From there on, he served as a teacher at Government High School, Jotsoma from 1962-1995, he was in the Board of Directors at the Nagaland State Co-Operative Bank in 1995.
In 1996, he became the President of Angami Public Organization. He was also the Vice-President and later became the President of Western Angami Pastor Deacon Association. He also served as a Deacon at Baptist Church Jotsoma from 1997-1998.
Krurovi Peseyie was also a member of the Advisory Board of Kohima Science College, Jotsoma, and was also the Acting President of Nagaland State Ex-Servicemen League and President of Kohima Ex-Servicemen Union.
He was the speaker of Naga Hoho in 1998 and was among the first group of Advisory Board Members of the Angami Public Organisation from 2011-2014.
Condolences
Meanwhile, Naga Club and MLA Keneizhakho Nakhro have condoled his demise.
Naga Club has expressed extreme shock and sadness by the death of their president Krurovi Peseyie.
“The renaissance of Naga Club with its fifth team before the Centennial Jubilee celebration at the Centennial Amphitheatre of the Baptist Church Jotsoma on the 29th day of November 2018 at 11:00 am stands as testament of what power of conviction Mr. Krurovi Peseyie, only a self-effacing man with graceful yet resolute stride could accomplish,” said Naga Club vice president Khinyi Woch and finance secretary Kuolachalie Seyie in a condolence message.
They recalled that when some elders of the erstwhile Naga Hills felt the serious need of reviving the Naga Club in order to legitimately celebrate the hundredth year of its existence, the first Consultative Meeting was held on March 23, 2017 in Kohima. After more consultations, a Meeting of Naga Tribes representatives was held on the June 2, 2017 at Naga Club Building, Kohima and Krurovi Peseyie was elected Chairman of the Ad-hoc Office Bearers. The Naga Club adopting and enacting its Constitution on the 14th November, 2018 was formally reconstituted with Krurovi Peseyie as the President for three year tenure, they said.
His passing away in a time like this comes in as a bafflingly severe blow to all of us so much as it is to his family, they said while conveying heartfelt condolences and sympathies to each member of the family.
“We shall always remember and cherish the great contributions and love our President Krurovi Peseyie had for both the Naga people and the Naga Club until his creator called him home,” they said.
The Naga Club maintained that his demise has created a vacuum difficult to be filled. “A passing way of such a tranquil and unsullied soul is an enormous loss not only for his community and the Naga people but humanity as a whole,” they said.
MLA of 8-Western Angami Assembly Constituency, Keneizhakho Nakhro said expressing shock on Peseyie described him as “A man of true pragmatic principles, soft spoken & gentle, with dauntless spirit and revered by many. A person who led from the forefront with strong conviction, integrity to withstand and resists against all odds”.
Lt. Krurovi Peseyie, has inspired many on the footstep he walked in, his effortless and notable exemplary guidance is remarkable and will cherish in days to come, he said.
“Today marked a dark day for us, specially Angamis and Western Angami peoples in general because we have lost a rare gem and dynamic leader,” Nakhro said.
“The weight of emptiness & void created will be ever hard to fill and replace,” he said, adding that Late Peseyie was a true warrior and fighter till his last breath, keenly full of hopes, positive energy, cheerful, lively and confident.
NTC:
The Nagaland Tribes Council (NTC) has expressed shock at the sudden demise of one of its former Member Advisor, Krurovi Peseyie, who breathed his last at Dimapur on January11.
The NTC said that late Peseyie was sincere, active and a dedicated person possessing elderly character committed towards the welfare of the society.
Stating that his sudden death is a loss to the Nagas as a whole and has created void in the society, the NTC expresses its utmost sympathy, shared the sadness and conveyed its deepest condolence to the bereaved family and prayed to almighty God to grant them courage to withstand in this time of sorrow and grief.