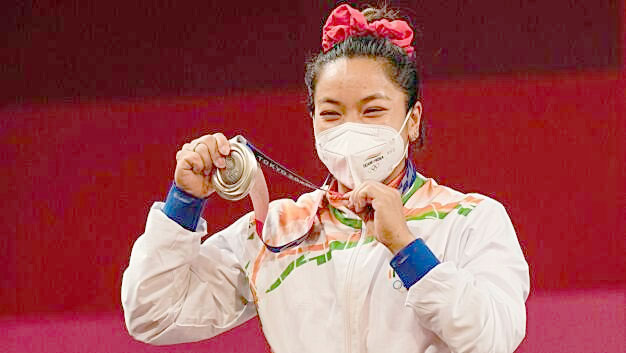 Tokyo, July 24: President Ram Nath Kovind and Prime Minister Narendra Modi led the country in congratulating Mirabai Chanu, who on Saturday ended India’s 21-year wait for a weightlifting medal at the Olympics by clinching a silver in the 49kg category at the Tokyo Games here.
The 26-year-old lifted a total of 202kg (87kg+115kg) to better Karnam Malleswari’s bronze in the 2000 Sydney Olympics and open India’s account in Tokyo.

With this, she exorcised the ghosts of the 2016 Games where she had failed to log a single legitimate lift.
The gold went to China’s Hou Zhihui for an effort of 210kg (94kg+116kg) , while Aisah Windy Cantika of Indonesia took home the bronze with an effort of 194kg (84kg +110kg).
President Kovind congratulated Chanu on her historic feat.
“Heartiest congratulations to Mirabai Chanu for starting the medal tally for India in the Tokyo Olympics 2020 by winning silver medal in weightlifting,” Kovind tweeted.
Wishing Mirabai on her success, PM Modi said her feat will inspire the future generations.
“Could not have asked for a happier start to @Tokyo2020! India is elated by @mirabai_ chanu’s stupendous performance. Congratulations to her for winning the Silver medal in weightlifting. Her success motivates every Indian. #Cheer4India #Tokyo2020,” Modi tweeted.
Sports Minister Anurag Thakur and his predecessor Kiren Rijiju too congratulated the weightlifter for bagging a medal for India on the first day of the competitions here.
“India’s 1st medal on day 1 ! @mirabai_chanu wins SILVER in women’s 49kg weightlifting! India is so proud of you Mira!,” Thakur wrote on his twitter handle.

Rijiju added: “India strikes first medal at Olympic #Tokyo2020 Mirabai Chanu wins silver Medal in 49 kg Women’s Weightlifting and made India proud Congratulations @mirabai_chanu! #Cheer4India.”
India’s lone Olympic gold medallist and former shooter Abhinav Bindra too took to the social networking platform to wish Mirabai.
“Many many Congratulations to @mirabai_chanu on winning India’s first medal at #Tokyo2020. Such An inspiring performance that will be remembered for a long time to come and will inspire generations. Well done.”
Cricket stars including batting legend Sachin Tendulkar, Virender Sehwag, VVS Laxman and Gautam Gambhir, also were not left behind as they congratulated the Manipuri lifter for her success.
“MIRABAI CHANU! Absolutely amazing display of weightlifting. The way you have transformed yourself after your injury and clinched a historic silver for #TeamIndia is absolutely stupendous,” Tendulkar tweeted.
“Ghazab. Bhartiya Naari Sab par Bhaari. #MirabaiChanu , remember the name. Thank you for making us all proud @mirabai_chanu, and winning us a Silver at the Olympics. Many more to come. #Tokyo2020,” wrote Sehwag, known for his witty tweets.
“Congratulations #MirabaiChanu on making us proud and bringing us glory. Our first medal at the #TokyoOlympics2020 , a Second place medal in the Women’s 49kg weightlifting . Super Proud,” Laxman said.
Gambhir added: 1.3 billion Indians proud of #MirabaiChanu! ?? ????.”

Olympic medallist wrestler Sakshi Malik and double Commonwealth Games gold medallist lifter Satish Shivalingam too were effusive their praises for Mirabai’s feat.
“Mirabai Chanu wins silver Medal in 49 kg Women’s Weightlifting and made India proudFlag of India Congratulations @mirabai_chanu! #Cheer4India #Tokyo2020,” Sakshi wrote on her twitter page.
Shivalingam said he got emotional while watching Mirabai creating history in Tokyo.
“History create ho gaya. Itna aasan nahi hota (History has been created. It was not easy), it is a very very big thing. I had tears in my ears. It will be difficult for anyone to emulate this performance,” he said.
Star Indian wrestler Bajrang Punia, who will compete in the Tokyo Olympics, said Chanu’s silver will boost the morale of the entire Indian contingent.
“Congratulations for a beautiful opening on medal tally @mirabai_chanu. This Second place medalmedal is a morale boost for our Indian contingent. Thank you for a spectacular performance jai hind.”
With Saturday’s feat, Chanu became the second Indian women to win a silver medal behind shuttler PV Sindhu.
Congress leader Rahul Gandhi also Samajwadi Party President Akhilesh Yadav also congratulated the Manipuri.
“Heartiest congratulations to Mirabai Chanu for starting the medal tally for India in the Tokyo Olympics 2020 by winning silver medal in weightlifting,” Gandhi wrote.