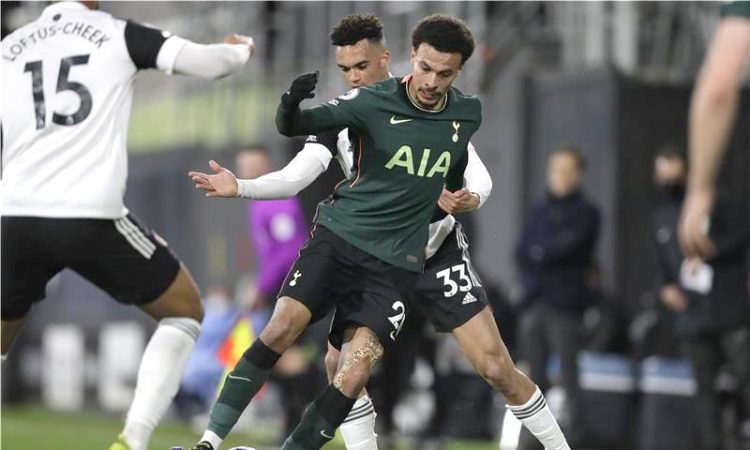 LONDON, March 5: Tottenham Hotspur rode their luck in the quest for a top-four finish in the Premier League with a 1-0 victory at Fulham on Thursday thanks to an own-goal by Tosin Adarabioyo and the intervention of the Video Assistant Referee (VAR).

Victory dragged Tottenham back into the race for a Champions League spot with Jose Mourinho’s eighth-placed side on 42 points from 26 matches, four points behind Everton in fourth, ahead of Sunday’s clash with Crystal Palace.
“In this period we need three points. Fulham are a very good team,” Tottenham’s Toby Alderweireld told BT Sport. “We should be better on the ball but without it we did everything we could to keep a clean sheet.”
Seconds after an unmarked Harry Kane failed to head his team in front, Tottenham took the lead from a quick counter-attack in the 19th minute when Son Heung-min’s cross was met by Dele Alli before going over the line following a touch by Adarabioyo.
Fulham began the second half brightly and thought they had equalised through Josh Maja but his effort was chalked off by VAR after Davinson Sanchez kicked the ball onto Mario Lemina’s hand as Tottenham looked to clear.
“For the players and maybe referees it’s a difficult one because some are high intensity and not on purpose but they get given,” Spurs midfielder Pierre-Emile Hojbjerg said.
“As players I think what we wish is some kind of consistency in the reviews with the handball situations but I haven’t seen it so I can’t say if it was on or not.”
Midfielder Alli looked sharp in his first league start since the opening day of the season and combined well with Son late in the first half, but the forward was unable to head in the England international’s cross from a tight angle.
Fulham pushed on after going behind as Antonee Robinson weaved his way into Spurs’ penalty area in the dying seconds of the first half and found Maja who set up Lemina, but the Gabon midfielder’s shot flew over the crossbar.
Fulham stayed 18th in the table and deep in relegation trouble, three points behind Newcastle United and Brighton & Hove Albion.
Premier League: Chelsea inflict fifth straight home defeat on Liverpool

Chelsea gained the upper hand in a tight battle for a place in next season’s Champions League by inflicting Liverpool’s fifth consecutive home defeat as Mason Mount’s winner earned a 1-0 win on Thursday.
The Blues move into fourth in the Premier League, four points clear of Liverpool, who slip to seventh.
After a 68-game unbeaten league run at Anfield over nearly four years was ended in January, the English champions are now on their worst ever league run at home.
By contrast, Chelsea’s unbeaten run since Thomas Tuchel replaced the sacked Frank Lampard in January stretches to 10 games.
Tuchel was appointed with Chelsea five points adrift of the top four, but they are now in pole position to secure a much-needed return to the riches of the Champions League after spending £220 million on new players in last summer’s transfer market.
Timo Werner is one of the big money signings that has failed to live up to his price tag.
The German international, who has long linked with a move to Liverpool before arriving at Stamford Bridge, has now scored just once in his last 18 Premier League games.
However, Werner was desperately unfortunate not to end that barren run when he flicked the ball beyond onrushing goalkeeper Alisson Becker and bundled the ball over the line.
A VAR review, though, controversially chopped the goal off for the most marginal of offside decisions.
At the other end, Sadio Mane should have then given Liverpool the lead against the run of play when he skewed a glorious chance well wide.
The combination of Fabinho and Ozan Kabak was Liverpool’s 19th central defensive partnership of an injury-ravaged season.
Chelsea were easily exposing the lack of co-ordination in the backline and another simple ball over the top three minutes before half-time freed Mount before he cut inside to brilliantly find the far corner.
Andy Robertson cleared Hakim Ziyech’s goalbound shot off the line as the visitors also started the second-half strongest.
Needing a goal, Klopp took the surprise decision to withdraw the Premier League’s top goalscorer Mohamed Salah as Diogo Jota made his return from a three-month injury layoff.

The Egyptian shook his head in frustration at the call in a further sign all is not well in the Liverpool camp.
Salah’s agent responded with posting a full stop on Twitter, suggesting the 28-year-old’s time at Anfield may be coming to an end.
Werner had another great chance to seal the three points, but Alisson spread himself well to block at his near post.
Klopp’s men have now won just three of their last 13 league games to tumble down the table since topping the standings at Christmas.
Tuchel has continously followed in the footsteps of his compatriot, succeeding Klopp at Mainz and Borussia Dortmund.
The Chelsea boss had won just two of their previous 14 meetings, but came out well on top in their first tussle in English football. (Reuters/AFP)