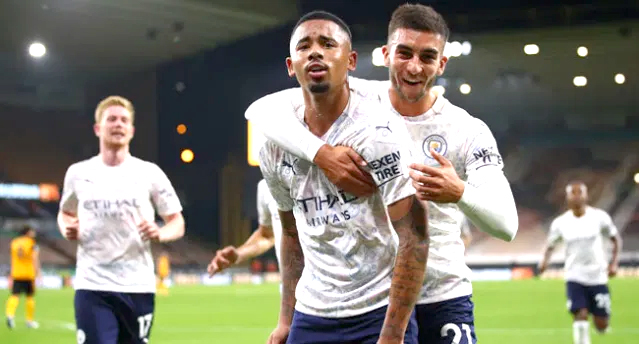 WOLVERHAMPTON, September 22: Manchester City survived a scare to start their Premier League title challenge with a 3-1 win against Wolves as Phil Foden enjoyed a moment of redemption on Monday.
City’s delayed start to the campaign — due to their involvement in last season’s Champions League — had allowed Liverpool to build a six-point lead over them before they had even kicked a ball.
Pep Guardiola’s side could not afford to slip up at Molineux if they wanted to keep pace with the champions and they raced into a two-goal lead before half-time thanks to Kevin De Bruyne’s penalty and Foden’s cool finish.
City’s swaggering first half gave way to an anxious spell as Wolves dominated after the interval and they had to cling on afer Raul Jimenez got one back before Gabriel Jesus sealed the points in stoppage time.
Guardiola will not have been happy with the way debutant centre-back Nathan Ake, the club’s major close-season signing from Bournemouth, and his defensive partner John Stones were tormented by Wolves in the second half.
While City equalled Aston Villa’s record of winning 10 consecutive opening fixtures to a top-flight season, there is little doubt Liverpool remain the Premier League’s preeminent force for now.
Foden’s goal was a welcome morale boost in his first match since the midfielder was sent home in disgrace, along with Manchester United’s Mason Greenwood, after the pair invited local women into the England team’s hotel.
The breach of coronavirus protocols after England’s Nations League match in Iceland was publicly condemned by City, but the 20-year-old retains Guardiola’s trust.
It feels like a crucial season for City and Guardiola as they look to regain the title they won in 2018 and 2019.
Guardiola says he needs to “deserve” an extension to his City contract rather than just be handed one as he enters the final year of his current deal.
After finishing 18 points behind Liverpool and suffering a shock Champions League quarter-final defeat against Lyon, City need to push the champions harder this term and the early signs were encouraging.
Passing and moving with real intent, City went close when De Bruyne forced Wolves keeper Rui Patricio to save his dipping free-kick.
It was De Bruyne, showing no signs of relaxing after being voted PFA Player of the Year last season, who took the responsibility of driving City forward and in the 20th minute he prised open the Wolves defence.
The Belgium midfielder’s burst into the Wolves area drew a rash lunge from Romain Saiss and referee Andre Marriner awarded a penalty that De Bruyne converted with ease.
Since the start of last season, De Bruyne has scored and assisted more Premier League goals (34) than any other player.
City were beaten by Wolves twice last season, but this was Guardiola’s team at their imperious best and they struck again with a slick move in the 32nd minute.
Gabriel Jesus laid off to De Bruyne and his perfectly-weighted pass found Sterling, whose precise cutback teed up Foden to slot home from 12 yards.
De Bruyne had a chance to make it three from Jesus’s pass, but for once he couldn’t apply the finishing touch as Rui Patricio saved well.
Totally out-classed in the first half, Wolves were much improved after the break and there were worrying side for Guardiola as he surveyed his creaking defence.
Daniel Podence turned to fire just wide and he threatened again with a chip over City keeper Ederson that just cleared the crossbar.
Jimenez should have reduced the deficit when he shot wide from Adama Traore’s cross.
Jimenez set up a tense finale when he met Podence’s cross with a powerful header in the 78th minute, but Jesus netted deep into stoppage-time as his shot deflected in off Conor Coady. (AFP)

Aston Villa kicked off their Premier League campaign with a 1-0 victory over 10-man Sheffield United on Monday as Ezri Konsa bagged the winner after Emiliano Martinez saved a penalty for the hosts.
United were a man down early on after captain John Egan was sent off for a foul on Ollie Watkins.
Villa keeper Martinez saved John Lundstram’s first half penalty in his first appearance following his £17 million ($21 million) move from Arsenal last week.
Konsa sealed the points in the second half with a looping header, a wellearned reward for a committed display after he played on despite appearing to injure himself sprinting out for the second half.
It was the perfect start for Dean Smith’s side, who beat Burton Albion in the League Cup second round last week, as they look to avoid a repeat of last season’s relegation battle.
“A very good start, to get three points and a clean sheet you can’t ask for more. I thought we started the game the better and the game changes with the sending off,” Smith said.
“We probably should have scored more and since lockdown, defensively I think we’ve been more aggressive. It was a great start for Emi Martinez.”
After losing at home to Wolves last weekend, United have now lost their last five league games dating back to last season.
“I wanted to clear up (with the referee) the decisions he made. Why wasn’t there a look at the monitor?” United manager Chris Wilder said of Egan’s dismissal.
“Both boys are grappling there. The linesman never once raises his flag for a foul. I don’t see many Villa players running to the referee.
“It’s Premier League football and you wonder what’s going off.”
Former Nottingham Forest right-back Matty Cash was given his Villa debut after his close-season transfer and his deep cross provided an early half-chance for John McGinn, who volleyed over from an acute angle.
Watkins, another of Villa’s new boys, played a key role as United were reduced to 10 men in the 12th minute.
Tyrone Mings’ high long ball sent Watkins racing through on goal and Egan responded by tugging him back, with referee Graham Scott showing the defender a red card that was confirmed by VAR.
Wilder introduced on-loan Chelsea defender Ethan Ampadu and moved Chris Basham into midfield and the switch earned United their penalty in the 36th minute.
Basham’s clever run onto Oliver Burke’s pass forced Matt Targett to concede the spot-kick, but Martinez came to his rescue as he dived to his right to keep out Lundstram’s strike.
Konsa finally broke the deadlock from a 63rd minute corner when the defender met Mings’ flick-on with a header that floated past Aaron Ramsdale into the far corner.
Seven of Villa’s last nine league goals have now come from set-pieces.
Jack Grealish was close to putting the result beyond doubt when he curled just wide from the edge of the area. (AFP)