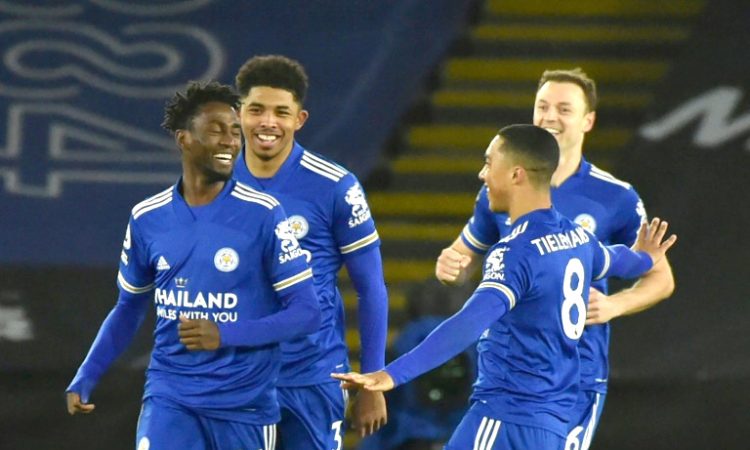 LEICESTER, January 20: Leicester moved top of the Premier League by inflicting another damaging 2-0 defeat on Chelsea on Tuesday, to leave manager Frank Lampard fighting to remain in charge at Stamford Bridge. The Blues have now won just two of their last eight league games to fall to eighth, nine points behind the leaders. Chelsea were expected to challenge for the title after a 220 million pound ($300 million) spending spree in the transfer market.

But it is Leicester who are threatening to recreate their heroics of the 2015/16 season when they shocked the football world to win the Premier League as first-half goals from Wilfried Ndidi and James Maddison earned a thoroughly deserved win.
“It sounds nice ‘top of the Premier League’,” said Maddison. “It’s a good one psychologically because we’ve worked really hard. It’s a great achievement halfway through the season.”
Both Manchester City and Manchester United have the chance to usurp the Foxes when they are in action on Wednesday.
But a second title in five years would be less of a surprise, despite the financial gulf between Leicester and the traditional top six in the English top-flight, as they have established themselves as a force to be reckoned with since Brendan Rodgers took charge nearly two years ago.
“There might be teams able to spend a lot more money than us and bring in quality from abroad and pay big wages, but our team spirit and togetherness will continue to try and keep us up there,” added Maddison.
“We’re not up there by a fluke, we’re up there because we work hard. People might talk about United, Liverpool, Tottenham or whatever but let them talk. We’ll do our business in the background and hopefully come the end of the season it will give us a chance of being right up there.”
Rodgers is reportedly one of Chelsea’s potential targets should Lampard be dismissed in the coming days.
Lampard bemoans attitude
The former England international again criticised the desire of his players to match the work rate of their opponents, as he did after a 3-1 defeat to Arsenal last month.
“The basics and bare minimums are to run, sprint and cover ground, and too many of our players didn’t do it,” said Lampard. “We were beaten by the better team.”
Chelsea got off to a terrible start as they were caught napping from a well-worked corner after six minutes.
Even after Harvey Barnes failed to connect with Marc Albrighton’s cross, Ndidi smashed in off the inside of the post from just outside the box.
Maddison then fired off the bar as Leicester dominated the opening half hour.
Chelsea showed signs of life when Callum Hudson-Odoi fired into the side-netting and the visitors thought they had won a penalty when Christian Pulisic was upended by Jonny Evans.
A VAR review, though, judged the foul had taken place outside the box and within two minutes it was 2-0 thanks to more dire Chelsea defending.
Albrighton’s simple long ball forward found Maddison completely unmarked inside the area and the in-form England midfielder slotted home his eighth goal of the season.
The margin of defeat could have been far more humiliating for Lampard had Leicester been more clinical in the second half.
James Justin headed wide with a free header at the back post before Edouard Mendy stood up well to deny Youri Tielemans.
Lampard responded by turning to his 85 million pound worth of talent on the bench as Timo Werner and Hakim Ziyech were introduced for the final 25 minutes.
Werner has now gone 11 Premier League games without a goal and even when the German international did find the net to flick home a late free-kick, the offside flag rescued Leicester.
Superb Michail Antonio gives West Ham 2-1 win over West Brom

A superb goal by Michail Antonio helped West Ham United to a 2-1 home win over West Bromwich Albion in the Premier League on Tuesday after visiting midfielder Matheus Pereira had cancelled out Jarrod Bowen’s opener in a lively contest.
The result lifted West Ham two places up to seventh on 32 points from 19 games while the Baggies stayed 19th on 11 points with an uphill task of avoiding relegation after their three-match unbeaten away run ended.
Antonio was delighted with West Ham grinding out the win which kept them firmly in the upper half of the table and stressed the Hammers still had room for improvement.
“We started the season well, 32 points in the league and last season we only finished on 39,” he told BT Sport.
“It’s unbelievable to be part of this squad at the moment, the chemistry is so good in the squad this season and we’re not playing at our best.
“We’re still learning to play with each other but we manage to get wins. Things are looking good but the fact is we’ve not reached our best yet and we can be better.”
West Ham dominated the first half and took the lead in added time when Vladimir Coufal turned a deep Said Benrahma cross into the six-yard box and the ball cannoned off Bowen’s chest past goalkeeper Sam Johnstone.
West Brom levelled out of the blue in the 51st minute as Pereira was given time and space to tee himself up on the edge of the penalty area and unleash a stinging low shot into the far corner.
The home side then moved up a gear and went close three times in the space of a minute on the hour mark before Antonio showed excellent composure and reflexes to restore West Ham’s lead in the 66th minute.
He volleyed past Johnstone on the turn from close range after Andriy Yarmolenko headed an Aaron Cresswell cross from the left into the striker’s path.
The visitors pressed in the closing stages and missed a chance to snatch a late equaliser with Darnell Furlong firing wide from distance. (AFP/Reuters)