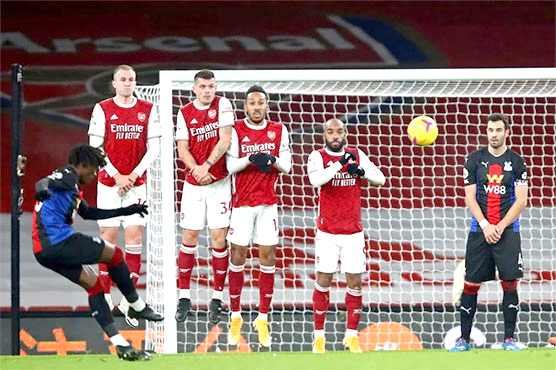 Arsenal played a goal-less draw against Crystal Palace in the Premier League on Thursday.

LONDON, January 15: Mikel Arteta admitted Arsenal were suffering from fatigue after their recent revival ground to a halt in a scrappy 0-0 draw against Crystal Palace on Thursday.

Arteta’s side had won their previous four matches in all competitions, but they were fortunate extend their unbeaten run to five games.
Palace were unable to convert several first half chances at the Emirates Stadium and, although Arsenal improved after the interval, they missed a chance to climb into the top half of the Premier League.
“I wanted to see a win and a few goals but we were fatigued. I cannot fault the spirit but it wasn’t enough,” Arteta said.
“We created a lot of situations against the low block but there was a period when we gave the ball away too much.
“We are playing a lot of games and you can see fatigue. Many players aren’t fresh. We lacked the quality in the final third to win the game.”
Arsenal sit in 11th place, eight points adrift of the Champions League places as they continue to pay the price for their worst start to a season since 1974-75.
Just before Christmas, Arsenal were only four points above the relegation zone, so their current position 12 points away from the bottom three affords Arteta some much-needed breathing space.
But this disjointed display underlined the attacking flaws that have stopped Arsenal building on last season’s FA Cup triumph.
Palace have only won one of their past eight matches in all competitions and are one point behind Arsenal in 13th.
Emile Smith-Rowe, Arsenal’s promising young midfielder, started after scoring against Newcastle as a substitute last weekend.
But Kiernan Tierney was absent with muscle tightness and the Gunners missed the Scotland left-back’s busy presence.
“Tierney is a real threat and the way we attack on the left is really important but he is injured and we have to find a solution. He will have an MRI scan tomorrow,” Arteta said.
Pierre-Emerick Aubameyang has endured a difficult season and, once again, Arsenal’s captain was a diffident figure.
The Gabon forward briefly sparked into life and tested Vicente Guaita with a fierce strike that was parried by the Palace keeper.
But Palace were finding their feet on a wet evening and Granit Xhaka had to make a perfectly timed sliding tackle to stop Wilfried Zaha getting a shot away after the forward slalomed into the penalty area.
Palace broke through the Arsenal defence again when Christian Benteke scooped his shot wastefully over from 10 yards after good work by Tyrick Mitchell.
James Tomkins was inches away from giving Roy Hodgson’s men the lead as the Palace defender got above Rob Holding to glance his header against the bar from Eberechi Eze’s free-kick.
Arsenal were struggling to get out of their own half and Bernd Leno had to make a superb save to repel Benteke’s header from Mitchell’s cross.
Arteta’s half-time team talk seemed like it might have the desired effect and Hector Bellerin drilled just wide from the edge of the area in the opening minute of the second half.
Arsenal threatened again as Bukayo Saka forced Guaita to block at the near post before Alexandre Lacazette blasted into the side-netting after a flowing move.
Arteta sent on Nicolas Pepe and Thomas Partey, back after a month out with a thigh injury.
But the expected push never came and Palace were able to keep the misfiring Gunners at bay with ease.
Manchester United can strike psychological blow at Anfield, says Berbatov
Manchester United can strike a big psychological blow in the Premier League title race if they beat Liverpool at Anfield for the first time in five years on Sunday, according to former United striker Dimitar Berbatov.
Ole Gunnar Solskjaer’s side trailed leaders Liverpool by nine points after losing to Arsenal in early November and languished in 15th spot in the table after a dreadful start.
After a dramatic reversal of fortune they go into Sunday’s clash as leaders and knowing that a win would open up a six-point gap over Juergen Klopp’s side.
“If United win it will be a big blow for Liverpool psychologically, it will also be a big statement to the Premier League and United will be sending a message that we are back,” Berbatov said in an interview with bookmaker Betfair.
With Manchester City firing on all cylinders again, however, Berbatov says that even if United do win, it would be wrong to assume they would be favourites to claim their first league title since former manager Alex Ferguson retired in 2013.
“If they do win, they can’t sit there and enjoy it because six points is nothing in the Premier League and that’s something we’ve witnessed before,” Berbatov, twice a Premier League title winner with United, said.
“It will be a great boost for the team and the confidence if they do win but you don’t stop and smile, you must build on it until the very last game.
“In my first season at United, we went head-to-head with Liverpool and it felt great to beat them to the title. Although we lost to them on my debut, we went on to win the title.” (AFP/Reuters)