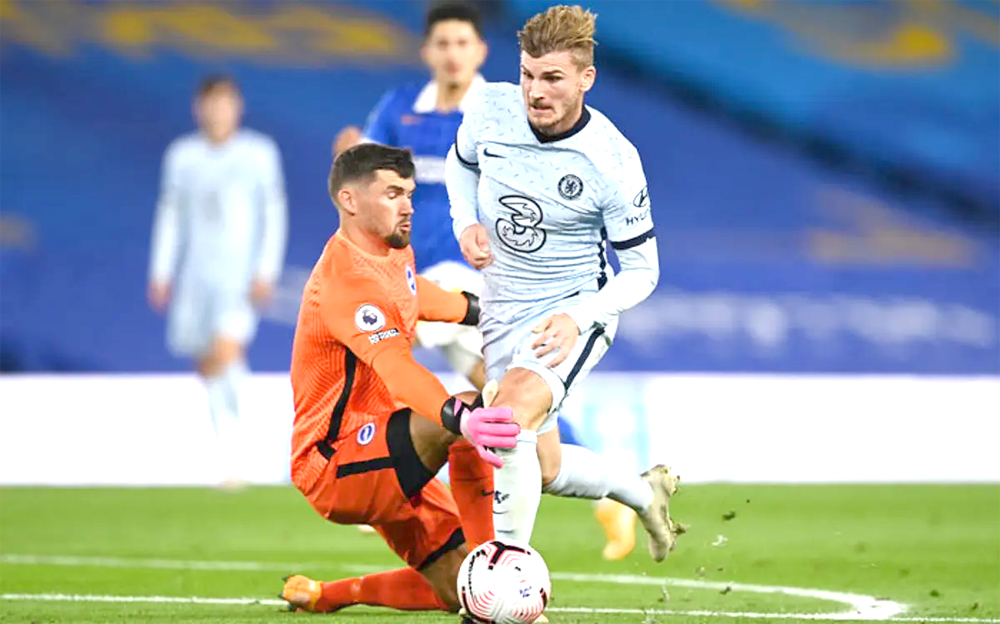 Chelsea's Timo Werner is brought down by Brighton goalkeeper Mat Ryan for a penalty during their English Premier League match on 14 September 2020.

BRIGHTON, September 15: Frank Lampard believes Chelsea are already showing the benefits of his £200 million ($257 million) spending spree as they kicked off their Premier League campaign with a 3-1 win at Brighton on Monday.
Blues boss Lampard has splashed out on a host of new signings and the early returns on his lavish investment were promising.
Germany striker Timo Werner, a £53 million recruit from Leipzig, won the penalty that Jorginho converted to put Chelsea ahead.
Kai Havertz, who made a £70 million switch from Bayer Leverkusen, wasn’t quite so impactful, but Lampard will be confident there are better days to come from the young Germany forward.
“Timo’s speed to win the penalty showed he is sharp and he was a threat all night. He is very mobile and I liked his performance,” Lampard said.
“With Kai we saw a lot as well. To get these minutes will only be good and both of them will be huge players for this club.”
Chelsea goalkeeper Kepa Arrizabalaga was guilty of another mistake when Leandro Trossard equalised for Brighton.
But Reece James’ superb strike put Chelsea back in front before Kurt Zouma’s deflected effort sealed the points.
It was an encouraging result for Lampard, who has accepted he is under pressure to deliver a title challenge after spending more than any other club so far in the summer transfer window.
“I think to expect everything to click on day one is very difficult. But what they did do was show a bit of determination,” Lampard said.
@I really liked the work ethic and the discipline of the team. We’ve been together as a team for four days after the international break. We had a lot of quarantines before that and new signings.
“We might have dropped points in this game last season. I’m not getting excited by that on day one, but it had a little bit of determination and resilience about it I thought.”
Chelsea finished 33 points behind champions Liverpool in fourth last season before a disappointing FA Cup final defeat against Arsenal, but they are primed to improve if Lampard can gel his new signings.
Lampard’s other expensive recruits, former Ajax playmaker Hakim Ziyech and ex-Leicester left-back Ben Chilwell, were both sidelined by injuries, while Thiago Silva wasn’t available as he returns to training following his free transfer from Paris Saint-Germain.
The historians among Chelsea’s fanbase will have noted this was the third time they have started a Premier League campaign with a Monday night victory, with the Blues going on to win the title on the previous occasions in 2014-15 and 2016-17.
The only frustration for Lampard was Kepa’s howler.
The world’s most expensive keeper was already under pressure to improve after an error-strewn season and with Chelsea having spoken to Rennes about Senegal keeper Edouard Mendy, his days as first choice might be numbered.
Insisting he has not written off Kepa yet, Lampard said: “I am happy with Kepa, I saw confidence in him, he is here, he is our keeper and I am happy with him.”
Werner was Chelsea’s central striker while Havertz lined up on the right flank in the three-man attack.
It was Werner who showed all his class as Chelsea took the lead in the 23rd minute.
Brighton midfielder Steven Alzate surrendered possession with a wayward pass and Jorginho fed Werner, who raced through on goal and was brought down by Mat Ryan as he rounded the Albion keeper.
Jorginho stepped up to take the penalty and Chelsea’s captain sent Ryan the wrong way with his trademark hop before shooting.
Brighton equalised in the 54th minute when Trossard’s 20-yard shot slipped under Kepa’s weak attempted save.
Kepa’s blunder wasn’t fatal for Chelsea as James restored their lead just 100 seconds later with a stunning 30-yard blast.
Chelsea sealed the points in the 66th minute when Zouma met James’ corner with a volley that took a heavy deflection of Adam Webster to wrongfoot Ryan. (AFP)