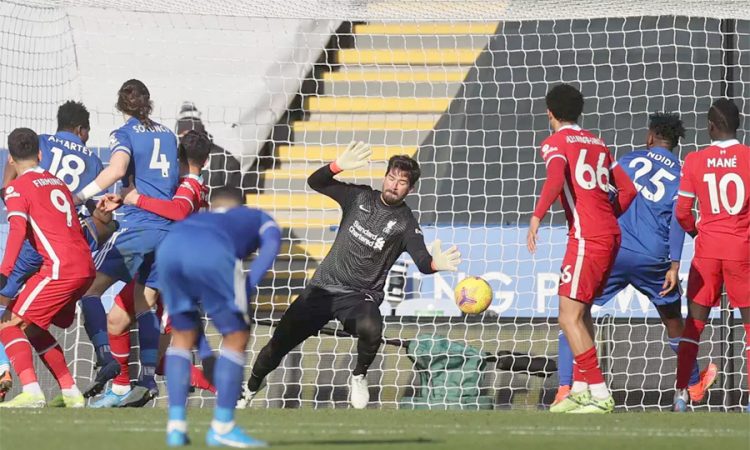 LEICESTER, February 13: Liverpool crashed to a dismal 3-1 defeat at Leicester to leave their top four hopes in jeopardy after Alisson Becker’s latest blunder sparked a stunning collapse from the troubled Premier League champions on Saturday.

Jurgen Klopp’s side endured a third successive defeat to effectively end any chance of retaining the title.
The calamitous nature of Liverpool’s late meltdown raises serious questions about their bid to qualify for next season’s Champions League.
Mohamed Salah had given the Reds the lead in the second half at the King Power Stadium.
But James Maddison triggered a remarkable burst of three goals in seven minutes from the hosts.
Maddison’s VAR-assisted equaliser was followed by a howler from away keeper Alisson, whose miscued clearance was converted by Jamie Vardy.
It was another miserable afternoon for Alisson following his two costly mistakes in last weekend’s 4-1 defeat against Manchester City.
Harvey Barnes put the seal on Leicester’s superb comeback, leaving fourth placed Liverpool languishing 10 points behind leaders City, who have two games in hand including one against Tottenham later on Saturday.
While Klopp would privately concede that Liverpool won’t win the title, it is their top four place that he will be more worried about after the Reds were left with just two wins from their last 10 league games.
They could be as low as sixth place by Monday if Chelsea and West Ham win their games in hand.
The temperature was well below zero in the east midlands and Klopp’s 300th game in all competitions as Liverpool manager could not have been any more bitter.
The City humiliation last Sunday left Klopp insisting he does not listen to the “noise” around Liverpool’s shocking slide.
He won’t be able to ignore the alarm bells any longer
Leicester climbed above Manchester United into second place after feasting on Liverpool’s problems. (AFP)