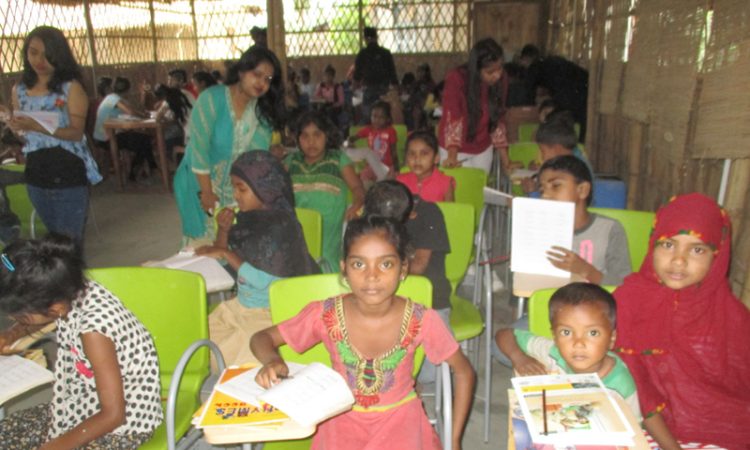 Dimapur, April 15: The traditional Palm Leaf and Bamboo structure, a part of North East Christian University (NECU), Burma Camp, Dimapur transforms into a makeshift classroom on Fridays, Saturdays, and Sundays where children who go to school and children who do not come together under one roof, without a fence separating them, to learn something new each time.

Almost all of the 70 children who gather in the hall three days of each week come from homes of daily wage earners who either cannot go to school or study in schools run by the government and sometimes lack the quality of education they need, explained Reeme Deb, the project co-coordinator of “Pratibha”.

“Pratibha” which translates to “intelligence” is an initiative of Vivekananda Welfare Foundation and is the brainchild of Reeme, who herself is a student of BA (6th Semester) and wants to do something for the underprivileged students around her.

Talking to Nagaland Page about how the whole thing unfolded during one of the classes, she said that before undertaking the initiative, she wanted to make a difference but didn’t have the money to do anything significant; but had the time and this idea is something where time is the most important resource.

“I shared this idea with a few of my friends who also wanted to do something for the society, and like me had no money but time,” she explained and added that initially they formed a WhatsApp group called “The Help” and did a cursory survey of the area around the University campus and discovered about 25 children who were not receiving any formal education.

Once the children were discovered, she reached out to the administrators of NECU with the request to grant permission to her and her team to take classes for these children when the infrastructure isn’t in use.

“I think they were a bit hesitant because I had approached them as an individual,” she mentioned and said that the administrators took about two months to make the decision of granting them the permission to carry out the classes.

Meanwhile, she approached a number of NGOs to accommodate the project but no one came forward until it was pitched to the President of Vivekananda Welfare Foundation, Niranjan Saha who showed interest instantly and “Pratibha” became the first official project of the foundation. The first class was subsequently held on February 15.

The NGO Vivekananda Welfare Foundation was formed in the year 2015 on the occasion of the birth anniversary of spiritual leader and youth icon Swami Vivekananda. It has been working on different humanitarian spheres in Dimapur since its formation and was registered in December 2018.

Expressing gratitude towards the administrators of the university and VWF, Reeme said that though the idea sounds simple enough, it’s implementation is difficult as keeping things organized often gets very messy and since all of the volunteers who teach the students are students themselves, they have to be accommodated and scheduled in such a way that they are able to be present and teach the children at the right time and that their own studies and other activities do not clash.

“The classes must go on,” she said, explaining that to keep things in order the volunteers are divided into groups according to their availability and each group is given a day to take classes. No single volunteer takes classes on all the three days of a week. She revealed that there are now about 20 volunteers involved in the project and more are needed.

The sight inside the hall during the classes looks like a perfectly organized chaos with a particular group of children sitting on the mat on the floor chanting ‘A, B, C..’ while a young lady points at the alphabets written on a giant whiteboard; another group of children between the ages of 10-12 years sits around a table trying to understand some mathematical problems being solved by a young man.

The children are divided among groups according to their classes and age and each group is taught and supervised by one or two volunteers. It can be easily noticed that most students are girls. For now, the children who come to study in the classes range from those who don’t go to school to those who are in class 9. And it is not only academic education that they are provided but they are also taught moral values.

Reeme said that until now, everything is going very smoothly. The children are enjoying the love, the company and the way they are being taught and the volunteers are also gaining much experience from the exposure. She expressed that without the volunteers, the idea would not have materialized and their dedication, efficiency and empathy, is keeping this moving.

She said the volunteers understand the importance of education and the power it has to transform circumstances as all of them come from not well-to-do families.
Reeme and Niranjan both shared the aspiration of taking the project to other parts of the city and even outside as they believe these are not the only children who need education and such children are present everywhere but this means more manpower and infrastructure will be needed.

Interestingly, VWF, for now, doesn’t have its own office and functions from the premise of a member of the NGO.

Niranjan said if there are enough volunteers, such classes can be carried out every day. Presently, the classes take place for about an hour and a half from 3 p.m. onwards on the three days.

Another way the foundation is making sure that the children do not skip their classes is by providing them food and toffees during and after the classes. The foundation also bears all the expenses of the study materials required to keep the classes running like buying pencils, pens, books, etc as well as toys and games like ludo, chess, etc. On completion of two months of education, the children are given caps.

“Swamiji wanted the youths to be educated,” said Niranjan. “It is challenging but at the same time a wonderful experience.”