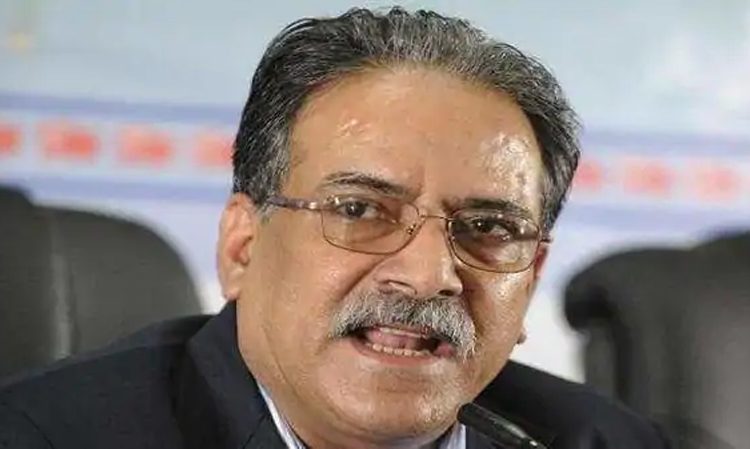 Kathmandu, February 9: Chairperson of the Nepal Communist Party’s splinter faction Pushpa Kamal Dahal ‘Prachanda’ said on Tuesday that his party has appealed to the international community, including India and China, to extend support to its ongoing struggle against Prime Minister K P Sharma Oli’s “unconstitutional and undemocratic move” to dissolve Parliament.

Nepal plunged into a political crisis on December 20 after Oli, in a surprise move, dissolved the House of Representatives, amidst a tussle for power with Prachanda. His move to dissolve the 275-member House sparked protests from a large section of the NCP led by Prachanda, also a co-chair of the ruling party.
“The House of Representatives must be reinstated if we are to consolidate federalism and democracy and take the peace process to the logical conclusion,” Prachanda said during an interaction with a select group of international media representatives based in Kathmandu.
“I believe that the Supreme Court would not endorse Prime Minister Oli’s unconstitutional and undemocratic move to dissolve the House of Representatives,” he said ahead of his faction’s massive protest rally in Kathmandu on Wednesday.
He also warned that if the House is not reinstated, the country would plunge into a grave political crisis.
Prachanda said that his party has appealed to the international community, including neighbouring India and China, to extend support to their ongoing struggle against Oli’s unconstitutional move of dissolving the House of Representatives.
“We have conveyed to the international community that Oli’s move has resulted in the demise of democracy and we seek support from the international community including India, China, European Union and the US to protect hard earned federalism and democracy,” said Prachanda.
India has described Oli’s sudden decision to dissolve Parliament and call for fresh elections as an “internal matter” that is for the country to decide as per its democratic processes.
However, China sent a four-member high-level delegation to Nepal in December to prevent a split within the ruling party. The team – led by a Vice minister of the Chinese Communist Party, Guo Yezhou – held separate meetings with several top NCP leaders before returning home without much success in its mission.
When asked whether Oli, 68, known for his pro-China leanings, took the decision to dissolve the House under foreign influence, Prachanda said, “we need not drag foreign elements in our internal matter, as such things are largely determined by internal situation rather than external environment.”
Commenting on Oli’s recent activities such as worshipping at the Pashupatinath temple, donating Rs 30 crore to the temple from the government’s coffer, talking about building Ram temple in Madi of Chitawan where he had made controversial remarks regarding Lord Ram’s birth place, Prachanda asked, “whether Oli is the chairman of a communist party or a Hindu organisation?”
He also accused the Oli-led government of engaging in corruption and adopting totalitarian attitude by breaching all democratic norms and values.
The Prachanda-led faction had been holding anti-government protest rallies and public gatherings in various parts of the country, including Kathmandu.
Oli, who is the chairperson of a faction of the NCP, has said he was forced to dissolve the House after knowing that the Prachanda-led faction was planning to file a no-confidence motion against him and introduce an impeachment motion against President Bidya Devi Bhandari.

Oli-led CPN-UML and Prachanda-led NCP (Maoist Centre) merged in May 2018 to form a unified Nepal Communist Party following victory of their alliance in the 2017 general elections.
The Prachanda-led faction, which is currently launching agitation to get official recognition from the Election Commission as the legitimate NCP, will hold a massive rally here on Wednesday in a bid to show its strength.
After breaching the Constitution by dissolving the House, the election being conducted under the present circumstances would be unconstitutional, Prachanda said.
Oli’s move that breached the constitutional provision has dragged the entire country towards political instability, said another chairperson of the splinter-faction Madhav Kumar Nepal. (PTI)