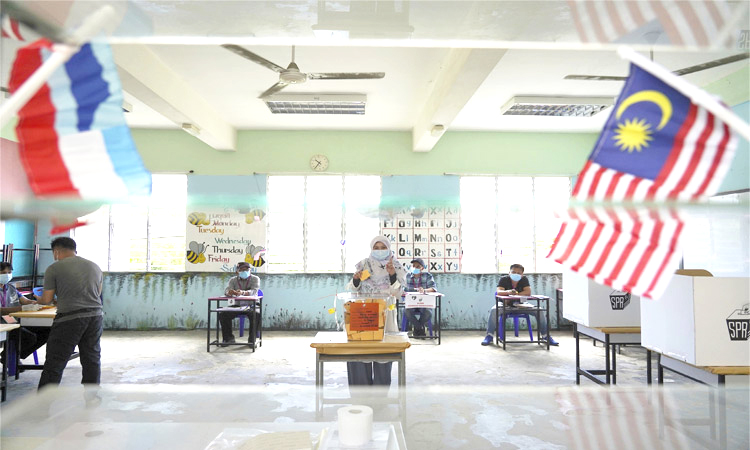 A woman castes a vote at a polling station in Malaysia.

KUALA LUMPUR, September 26: Polls opened on Saturday in Malaysia’s eastern Sabah state in a vote seen as a referendum for embattled Prime Minister Muhyiddin Yassin’s 7-month-old unelected government.
The leader of the opposition-ruled state dissolved the assembly on July 30 to seek early elections and thwart attempts by Muhyiddin’s ruling alliance to take over Sabah through lawmakers’ defections.
The stakes are high for Muhyiddin after opposition leader Anwar Ibrahim declared on Wednesday he has secured majority support in national Parliament to oust Muhyiddin and form a new government.
“This is the first state-wide election since the creation of Muhyiddin’s government in March. In a way, it is an indirect referendum on whether the people are happy with the formation of the backdoor (unelected) government,” said James Chin, professor of Asian studies at Australia’s University of Tasmania.
Sabah and neighbouring Sarawak on Borneo island hold about a quarter of Parliament seats and are seen as crucial for political leverage.
The two states are rich in oil and timber but among the poorest in Malaysia.
They have a greater level of autonomy in administration, immigration and judiciary.
The attempted takeover of Sabah was reminiscent of how Muhyiddin took power in March after defecting from the reformist government to form a new Malay-centric administration.
Muhyiddin’s alliance has since taken control of many states after lawmakers defected. The opposition now controls only Sabah and two of the country’s richest states, Selangor and Penang.
But Muhyiddin has been struggling to maintain support amid infighting in his coalition that has just a slim two-seat majority.
His leadership is now in further doubt after Anwar claimed to have won majority support, including from lawmakers in Muhyiddin’s camp.
Anwar hasn’t revealed details as he is waiting to meet Malaysia’s king, who is in a hospital for treatment.
The king has power to appoint a new Prime Minister or dissolve Parliament for early general elections. Muhyiddin has said Anwar’s declaration was a mere allegation until he provides evidence.
Muhyiddin has campaigned heavily in Sabah, pledging development.
Billboards of his smiling face dubbed “Abah,” or father, are prominent in many constituencies.
In contrast, former Sabah leader Shafie Apdal urged the state’s multiple indigenous groups to reject Muhyiddin’s Muslim government and unite behind him.
“A win will strengthen Muhyiddin’s position but a loss will embolden Anwar’s attempt to reclaim power,” said Oh Ei Sun, a senior fellow at the Singapore Institute of International Affairs.
The Sabah election is heavily contested with 447 candidates vying for 73 state seats.
Over a million voters, many in rural areas, are eligible to cast their ballots.
With coronavirus cases rising in the state in recent weeks, election officials have tightened rules with health screening and other strict precautions. (AP)