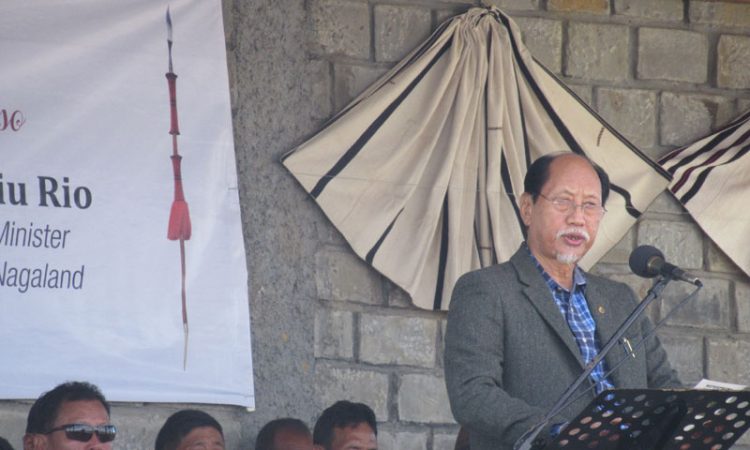 Kohima, November 22: Nagaland Chief Minister Neiphiu Rio Friday said that the final settlement to the Naga political issue may elude the Nagas for sometime due to division and disunity among the various political groups.
Rio said the negotiations for the Naga struggle which has been going on for decades witnessed a positive conclusion on October 31 last, however, the competencies of the negotiations are yet to be inked into an agreement.
With Nagas having many factions, the final settlement is yet to be signed, Rio said, while stressing on the need for all Naga political groups to be united.
“Nagas are one and the issue of the Nagas is one which will also end with one agreement,” he said.
Rio was speaking at the unveiling of the Tuophema village foundation memorial monolith, comprising of the Kense and Kaco clans of Tuophema village at Tuophema village, some 30 kms on the outskirts of state capital.
He said that in order to bring the final settlement at the earliest, Nagas must reason together, have better understanding among ourselves and stand united, however, till such the time Nagas remain divided and in disunity, settlement may elude the Nagas for sometime.
Rio also emphasized on the importance to know one’s own history and roots to have a better understanding of ourselves and others, and also to identify oneself of who we are and where we come from.
He stressed on the need to preserve and promote the unique culture and traditions of the Nagas which he said reflects and shapes our values and beliefs and also defines the unique identity of the Nagas from the rest of the world.
He also shared his concern on the imitation of western cultures by the youth and asserted the need to keep alive the rich traditions and cultures of the Nagas by teaching the young our folk songs and dances.
Rio said that the present generation must imbibe and inculcate the good values that our ancestors have left us with and live our lives well in unity amongst ourselves and with our neighbours as well.
Addressing the people of Touphema village, Rio pointed out that the people of Tuophema village have a huge responsibilities upon them as the village is a ‘tourist village’ where people from all walks of life, from near and far comes, to the village to witness the beauty and essence of the village.
As a tourist destination village, the chief minister lauded the villagers for their efforts towards cleanliness. He, however, said they can improve and improvise towards a clean environment, adding “a clean village reflects the health and wellbeing of the dwellers.”
He also opined that the people can learn the art of hospitality by being more courteous, cordial, gracious and attentive to guests. To make an impact in the society, Rio said everything must begin from the home itself and urged the men and women to teach and bring up their children with good values and morals.
Highlighting in brief the history of the foundation of Tuophema village, Head GB, Thekrucha Kaco and GB, Salieo Kense narrated how both the clans of Kense and Kaco wanted to establish a new village.
It was told that Kense used to come from the present Gariphema village while Kaco from Phenwhenyu village and met up at the present Tuophema village on a number of times. However, since it was during the head-hunting days, and they didn’t know each other’s intention and language, they pointed their spear on each other and used to depart to their respective villages.
One day through sign language, they both understood that they wanted to establish a new village; hence, after counting their fingers to seven, they both returned on the seventh day and laid the foundation of Tuophema village. Initially, the village was known as Hutuophema but during the Britishers time, it was shortened and rechristened as Tuophema, which is known by that name till today.
(Page News Service)