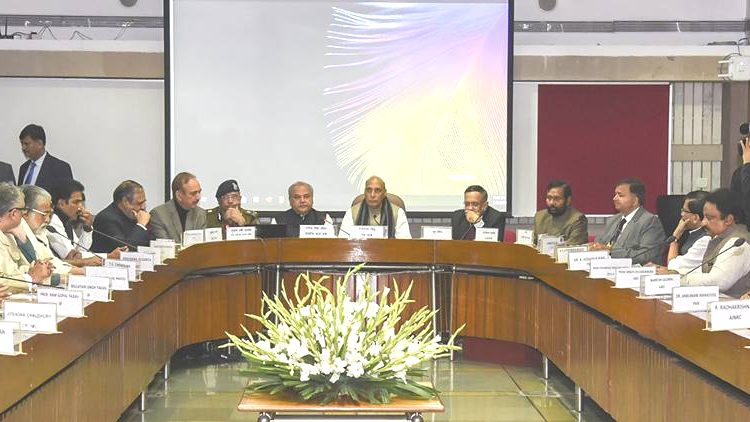 New Delhi, February 16: A resolution adopted by the all-party meeting chaired by Union Home Minister Rajnath Singh on Saturday condemned the cowardly terrorist attack on the CRPF convoy in Pulwama that left at least 44 jawans dead and over 45 seriously wounded.
The meeting was attended by leaders of the BJP government as well as opposition parties who unitedly expressed grief with the families of the bereaved.
The resolution also condemned terrorism in all forms as well as the support it was getting from across the border.
It further went on to say that “India has during the past three decades faced the menace of cross-border terrorism.”
In a direct attack at Pakistan, the resolution said, “terrorism in India has been actively encouraged by the forces across the border adding that India has displayed both firmness and resilience in dealing with these challenges”.
It said the entire nation speaks in one voice to express its determination to fight against terrorism.
“Today, we stand united in solidarity with our security forces in fighting terrorism and in defending the unity and integrity of India,” the resolution added.
The all-party meeting was held to brief top leaders of different parties on steps being taken by it to meet the challenge.
The meeting comes a day after Home Minister Rajnath Singh went to Kashmir to take stock of the situation.
The meeting was attended by Ghulam Nabi Azad, Anand Sharma and Jyotiraditya Scindia of the Congress, Sudip Bandyopadhyay and Derek O’Brien of the TMC, Sanjay Raut of the Shiv Sena, Jithendra Reddy of the TRS, D Raja of the CPI, Farooq Abdullah of the National Conference, Ram Vilas Paswan of the LJP among others.
Naresh Gujral of the Akali Dal, Upendra Kushwaha of the RLSP and Jai Prakash Narayan Yadav are among others who are attending the meeting.
Addressing the media after the meet, senior Congress leader Ghulam Nabi Azad stated that the Opposition parties have informed the home minister that they would stand with the government to end terror in the country.
“We stand with the government for unity and security of the nation and security forces. Be it Kashmir or any other part of the nation, Congress party gives its full support to the government in the fight against terrorism,” he said.
The opposition parties also requested the Home Minister to request the PM to meet the presidents of all national and regional parties, Azad said.
This was supported by other parties too, he added.
“We have also decided that there are many disagreements with the government, but for the sake of our country, security of all, we will stand with the government to end terror. The government has our support,” Azad said.
The Pakistan-based Jaish-e-Mohammad (JeM) had claimed responsibility for the suicide attack.
A suicide bomber had rammed an SUV carrying 350 kg of explosives into a bus carrying the CRPF troopers in the deadliest attack in decades on security forces in Jammu and Kashmir.
India had earlier rejected Pakistan Foreign Secretary Tehmina Janjua’s claims denying her country’s links to the Pulwama terror attack, saying that JeM, which claimed responsibility for the attack on Thursday, is based in Pakistan, and the “links are clear and evident and for all to see”.
The External Affairs Ministry spokesperson on Friday termed as “preposterous” the demand for an investigation, saying there is a video of the suicide bomber declaring himself a member of the terror group Jaish-e-Mohammed (JeM).
The spokesperson said India has not seen any constructive approach from Pakistan on bilateral relations and it has been sheltering terrorists and terror organisations such as JeM. He said Islamabad has not taken any action against such groups despite international demands.
India also demanded that Pakistan take immediate and verifiable action against terrorists and terror groups operating from territories under its control to create a conducive atmosphere in the region free of terror.
Political parties have closed ranks following the attack and have offered their support to the NDA government on its response on the matter.
Expressing solidarity with the Government of India and the security forces, Congress president Rahul Gandhi on Friday condemned the dastardly attack.
Addressing a press conference, Rahul Gandhi said the type of violence unleashed against the soldiers was “disgusting”.
Refusing to comment on any other issue, Rahul Gandhi said this was a time of mourning, sadness and respect adding that the Congress is fully supporting the Government and the security forces. (Courtesy: TS)