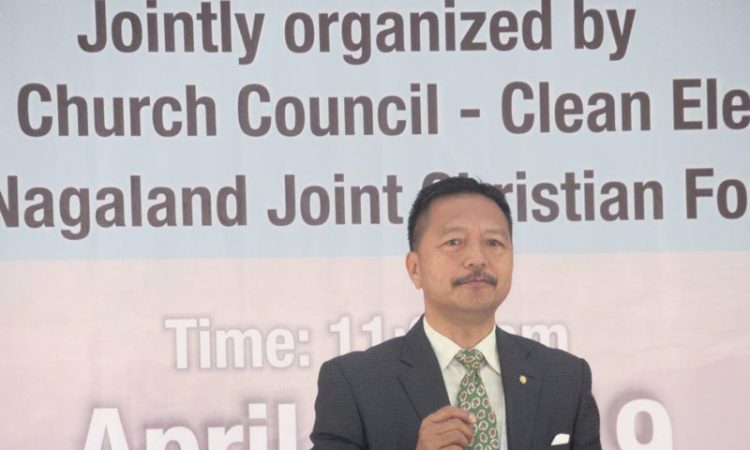 Rev. Dr. Mar Atsongchanger and Rev. Dr. Zelhou Keyho speaking at the prayer and consultation for the 17th Lok Sabha election at Kohima on April 2.

A battle of survival for our identity & faith: NBCC

Kohima, April 2: In what is an indication of how political parties in Nagaland values the call of the Church in this predominantly Christian State, most political parties and their candidates on Tuesday ignored a prayer and consultation meet for the 17th Lok Sabha Election with candidates and political parties organized by the Church in Kohima.
The Nagaland Baptist Church Council (NBCC) Clean Election Campaign (CEC) and the Nagaland Joint Christian Forum (NJCF) had jointly organized the prayer and consultation today at the NBCC Platinum Hall, Kohima. Except Dr MM Thromwa Konyak, Independent candidate for Lok Sabha from Chen Town under Mon district and a representative from the BJP, no candidate or party representatives turned up for the consultation.
Four candidates are in fray for the lone Lok Sabha seat from Nagaland – KL Chishi of Congress, PDA consensus candidate Tokheho Yepthomi of NDPP, Hayithung Tungoe of NPP and Independent candidate Dr MM Thromwa Konyak.
Speaking in the programme, convener, CEC NBCC, Rev. Dr. Mar Atsongchanger said the coming Lok Sabha election in the State will be a battle of survival for our identity and faith.
“Election few days from now is going to be very tough, not just for position but of our survival and identity as Christians to the world,” he said.
This, he said, was because of the fact that the present MPs in India are misleading the nation wherein their policies are threatening “our identity, survival and faith” and therefore, this election is going to be a battle of survival.
Rev. Atsongchanger said that it’s a shame for Nagaland that claims 100% Christianity turns out to be the most corrupt state in India. “While we all wish to transform the society, the change should begin with you and me by adopting the policy of clean election campaign of honesty for a clean, free and fair election process,” he said.
He also called upon all to stand and walk in one accord and make a commitment for a clean election which is free from the malpractices associated with the election process and to be the agent of change this election to see the change that we all want to see in our land.
“Although we profess to be Christians and are genuinely concern, worry and anxious about the things that are happening around us, are we really doing what we ought to do as Christians? Are we really praying for issues that are confronting us today?” asked Rev. Dr. Zelhou Keyho, President NJCF.
Politics, he said is good but lamented that bad politics have entered into our land and as people begin to experience new things, Keyho maintained that the little good things that we do seem to have no impact. Though things appear to be out of our control, he asserted that Nagas mustn’t give up.
He reiterated that Nagas need to be awaken of its consciousness that God has bestowed upon each one through embracing the ‘God factor’ in our daily lives and into our system in order to make and bring change in our land.
“As much as we want change, we need to change by fearing the Lord,” said Keyho and urged all to make a beginning somewhere.
Speaking on behalf of Nagaland Joint Christian Forum (NJCF), Rev. Sanchu maintained that with the dawning of a new era dawn, Nagas are confronted with many challenges and cannot overlook the presence of the evil forces and elements in our midst.
Towards this, he called upon all the candidates and the populace of the state to cooperate with the churches in our fight for clean election to bring healing in our land.
He also appealed the candidates and political parties not to provide liquor to the voters or to purchase votes but make an effort for a clean, free and fair election.
Appealing for prayer support, Independent candidate, Konyak who had earlier contested in 2008 and 2013 said he is committed to sacrifice for the Nagas in all fields – social, economy, political, utilization of natural resources, elements that are threatening the identity of the Nagas, etc.
The members present prayed for the citizens of the state, various political parties and the candidates for the 17th Lok Sabha election. (Page News Service)