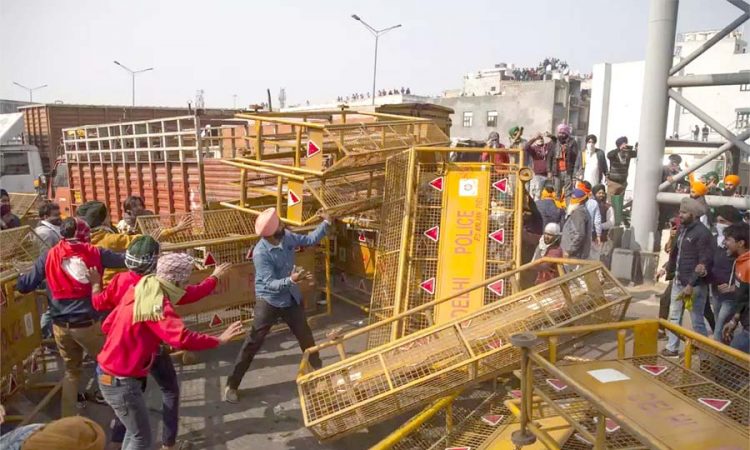 New Delhi, January 26: Leaders across the political spectrum on Tuesday condemned the violence in the national capital after farmers protesting against the the three farm laws deviated from pre-decided routes during a tractor march, clashed with the police, broke barricades and stormed the Red Fort, even as the Opposition attacked the Centre for letting the situation deteriorate.

While BJP spokesperson Sambit Patra slammed the violence saying “those we had been calling annadata (food-providers) for so many days have turned out to be extremists”, the Congress in a guarded reaction said the party and the country is pained by today’s violence and unruly incidents in Delhi.
Nationalist Congress Party president Sharad Pawar said what happened in Delhi is indefensible, but one also cannot ignore reasons which led to the situation as he warned against use of force on protesters.
Chirag Paswan, president of the Lok Janshakti Party, a BJP ally at the Centre, lashed out at those who “committed” crime in the name of agitation and termed it unacceptable.
Delhi’s ruling Aam Aadmi Party strongly condemned the violence, but blamed the Centre for allowing the situation to deteriorate to such an extent.
In a statement, the AAP said the violence had “certainly weakened” the movement, which was going on peacefully and in a disciplined manner.
The strong reactions by political parties and leaders came after protesting farmers went berserk during the tractor march against the three contentious farm laws, as they broke through barriers, overturned vehicles, clashed with police at several places in the national capital and entered the iconic Red Fort and ITO in the heart of the city.
The police used tear gas shells and lathi-charge to dispel the violent farmers.
Deviating from the designated route for the tractor parade, protesting farmers also hoisted flags from some domes as well as the flagpole at the Red Fort, the centrepiece of India’s Independence Day celebrations, to hoist the Nishaan Sahib’, the Sikh religious flag.
Following the day’s developments, Swaraj India president Yogendra Yadav said he felt “ashamed” of the way the farmers’ tractor parade turned out, and took responsibility for it.
In a sharp reaction, Patra tweeted, “Those we had been calling annadaata (food-providers) for so many days have turned out to be extremists. Don’t defame annadata, call an extremist an extremist only.”
Patra also shared a video in which a protestor is purportedly seen throwing away a national flag handed to him from the crowd as he climbs a pole to hoist a different flag. “Painful,” said the BJP leader.
As protesting farmers clashed with police at several places here, Congress leader Rahul Gandhi said violence is not the solution to any problem and sought repeal of the three farm laws in “national interest”.
In a statement, Congress’ chief spokesperson Randeep Surjewala said Prime Minister Narendra Modi must leave the path of ‘rajhat’ (stubbornness) and repeal the three farm laws immediately.
Left leaders also condemned the violence, but squarely blamed the government for letting the situation deteriorate.
“The situation has been brought to this pass by the Modi government. Farmers have been protesting peacefully in the cold for more than 60 days, not allowed to come into Delhi and more than 100 kisans are dead,” CPI(M) general secretary Sitaram Yechury said in a tweet.
“Violence in no form is an answer and is unacceptable. A govt which smears dissent, BJP’s troll army vilify those who ask for their rights, ministers make wild allegations, law officers make claims without basis in court — this is no way to deal with legitimate demands of our Kisans,” he said.
CPI general secretary D Raja too said violence was no way for either party to deal with the situation, but also blamed the Centre for letting things go out of hand.
Pawar asked the Centre to hold a dialogue with the farmers seeking scrapping of the new agri-marketing laws giving up its “extreme position” on the issue.
Interacting with media persons in Mumbai, the former Union agriculture minister also said Punjab may head towards restlessness if the Centre uses force against protesters and asked the Modi government to not commit that sin.
Describing as “most unfortunate” the incident of a protesting farmer hoisting a flag at the Red Fort, senior Congress leader Shashi Tharoor said he supported the farmers’ protests from the start but cannot condone “lawlessness”.
He asserted that on Republic Day no flag but the sacred tiranga should fly aloft the Red Fort.
Punjab Chief Minister Amarinder Singh said the violence during the farmers’ tractor parade against the new agriculture laws in Delhi is unacceptable, even as he ordered a high alert in his state.
The chief minister condemned the incidents that took place at the historic Red Fort and urged the farmers to immediately vacate the national capital and return to the borders, where they had been protesting peacefully for the past two months.

West Bengal Chief Minister Mamata Banerjee said the Central government’s “insensitive attitude” and indifference towards farmers are to be blamed for the violent protests in Delhi.
Banerjee urged the Centre to engage with the farmers and repeal the new farm laws, which she termed draconian.
“Deeply disturbed by worrying and painful developments that have unfolded on the streets of Delhi. Centre’s insensitive attitude and indifference towards our farmer brothers and sisters has to be blamed for this situation,” she tweeted.