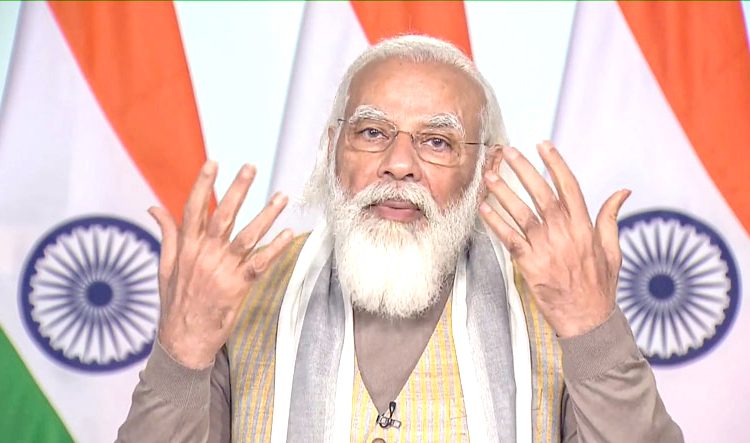 New Delhi, January 5: Enunciating his energy roadmap, Prime Minister Narendra Modi on Tuesday said the share of natural gas in India’s energy basket will be more than doubled, energy sources diversified and the nation will be connected with one gas pipeline grid to help bring affordable fuel to people and industry.

Inaugurating a 450-km natural gas pipeline between Kochi in Kerala to Mangaluru in Karnataka, he said India under his government is seeing unprecedented work on highways, railway, metro, air, water, digital and gas connectivity which will aid economic development.
The government has an “integrated approach to energy planning. Our energy agenda is all-inclusive,” he said.
While on the one hand, the natural gas pipeline network is being doubled to about 32,000 km in 5-6 years, on the other, work on the world’s biggest hybrid renewable plant combining wind and solar power has started in Gujarat.
Also, the emphasis is being laid on manufacturing biofuels as well as electric mobility, he said.
These measures will help India move away from being highly dependent on polluting coal and liquid fuels for meeting its energy needs.
As much as 58% of all energy consumed in the country currently comes from coal while petroleum and other liquids make up for 26% of the energy basket. Share of natural gas is just 6 per cent while that of renewables is less than 2%.
Modi said the share of natural gas, which is cleaner and can be transported through pipelines thereby cutting vehicular movements needed for other fuels, is targeted to be raised to 15% by 2030.
By the same time, petrol will be doped with as much as 20% of ethanol extracted from sugarcane and other agro products, he said.
This would help cut reliance on imports for meeting oil needs as well as reduce carbon emissions.
Also, the focus on renewable energy by using abundant energy from the sun and wind to generate electricity and promoting the use of battery-operated electric vehicles will help India meet its COP-21 commitments for cutting carbon emissions.
The Prime Minister said the government is working with a vision to connect the entire nation with one-pipeline grid that will help improve clean energy access as well as also aid in the development of city gas projects.
The new pipeline inaugurated on Tuesday is part of that plan, he said.
This new line will help take the fuel to industries such as petrochemical plants and fertiliser units as well as provide fuel for city gas projects for supply of CNG to automobiles and piped cooking gas to households in cities along the route, he said.
It will also help a 5 million tonnes a year liquefied natural gas (LNG) import terminal at Kochi to achieve full capacity. The terminal has been operating at less than 10 per cent of the capacity for last few years as there was no pipeline to take the gas to users.
Outlining the work done by his government in the energy sector, Modi said 900 CNG stations were set up till 2014 from the advent of CNG as fuel for automobiles in the country around 1992. In the last six years, the number of CNG stations has gone up to 1,500 and the target is to take them to 10,000, he said.
Also, 25 lakh households had piped natural gas connections for using the fuel for cooking purposes till 2014 which has risen to 72 lakh now, he said adding the new pipeline would help add 700 CNG stations and provide 21 lakh piped cooking gas connections in Kerala and Karnataka.
He said his government has doubled the LPG user base in six years by issuing 14 crore connections equivalent to the ones that were issued in six decades prior to it.
As many as 8 crore free LPG connections were given to poor women under the Ujjwala scheme and 12 crore free LPG refills were provided during lockdown last year, he said.
The abundant availability of LPG has ensured that states are no longer fighting for raising the kerosene quota and are instead declaring themselves kerosene-free.
“We are working to provide clean, affordable and sustainable energy,” he said.
Modi said his government’s integrated approach to energy planning has bought various reforms across the oil and gas sector, covering exploration and production and natural gas marketing and distribution.
“We plan to achieve one nation one grid. We also want to shift to the gas-based economy,” he said adding crores of rupees will be invested in the oil and gas sector this decade in raising the share of natural gas in the energy basket.
Prime Minister said the effort is to build future energy needs from today itself.
“While natural gas is the focus on one hand, and on the other, we want to diversify energy sources,” he said referring to the renewable energy plant and biofuels.
The 450-km Kochi-Mangaluru natural gas pipeline from Kochi in Kerala to Mangaluru in Karnataka will supply environment-friendly piped natural gas and CNG to 10 districts along the pipeline. The pipeline has a design capacity of 12 million standard cubic meters per day and costs Rs 3,000 crore to build.

He said that the pipeline would improve the ease of living in both the states and reduce the expenses of the poor, middle class and entrepreneurs of both the states, adding that it would become the base of the Gas Distribution System in many cities and would form the base of the CNG based transport system in these cities.
He said the pipeline would provide clean energy to Mangalore Refinery and would play a major role in reducing the pollution in both states. (PTI)

Will poor and underprivileged get COVID-19 vaccine for free? asks Congress