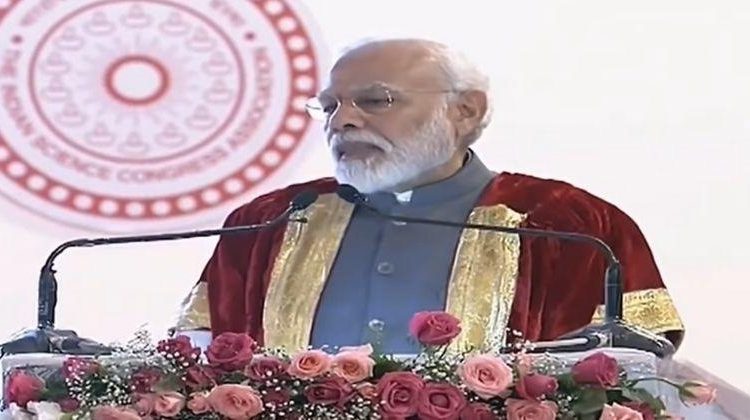 Bengaluru, January 3: Prime Minister Narendra Modi on Friday called on young scientists of India to “Innovate, Patent, Produce and Prosper,” and said these four steps would lead our country towards faster development.
The Prime Minister also stressed on the need to transform the landscape of Indian science, technology and innovation, as he assured that the government will ensure the ‘Ease of doing Science’ and effectively using information technology to reduce red tape.
“The growth story of India depends on its success in science and technology sector.
There is a need to transform the landscape of Indian science, technology and innovation,” Modi said.
Speaking after inaugurating the 107th Session of Indian Science Congress here, he said, “My motto for the young scientists in this country is -Innovate, Patent, Produce and Prosper.
These four steps will lead our country towards faster development.”
“If we innovate we will patent and that in turn will make our production smoother and when we take these products to the people of our country, I’m sure they will prosper,” he said adding that innovation for the people and by the people is the direction of our new India.
The Prime Minister also expressed happiness over improvement in India’s ranking in the Global Innovation Index to 52.
“Our programmes have created more technology business incubators in the last five years than in the previous 50 years.
I congratulate our scientists for this achievement,” he added.
Noting that new India wants technology and logical temperament, so that we can give a new direction for the progress of our social and economic life, Modi said with the production of cheap smart phone and cheap data in the country even a common man is confident that they are not separate and can directly connect with the government.
Observing that science and technology was being used in governance in a large scale, than ever in past, the Prime Minister said, “We are continuing our efforts to ensure ‘Ease of doing Science,’ and effectively using Information Technology to reduce red tape.”
He also mentioned that the digital technology, e- commerce, internet banking and mobile banking services are assisting rural population significantly, and farmers are getting required weather information at their finger tips through e- governance initiatives.
The coming decade will be a decisive time for the science and technology based governance, Modi said.
Recalling his government’s decision to get rid of single use plastic, Modi said, researchers have to find a cheap and efficient alternative to it in their labs.
He said the government’s efforts were to reduce import of crude oil by 10 per cent by 2022, as it would provide opportunity for startups to explore in the field of ethanol and bio-fuel.
Stressing on the need to encourage industry based research, Modi said such efforts will play a key role in making the country a 5 trillion dollar economy.
“There is a need for revolution in technologies assisting agricultural practices. Can we find farmer-centric solutions to the problem of stalk burning for instance? Can we also redesign our brick kilns for reduced emissions and greater energy efficiency.
We need to find solution towards clean drinking water also,” he said.
The Prime Minister also said our successes in space exploration should now be mirrored in the new frontier of the deep sea.
We need to explore, map and responsibly harness the vast oceanic resources of water, energy, food and minerals. (PTI)