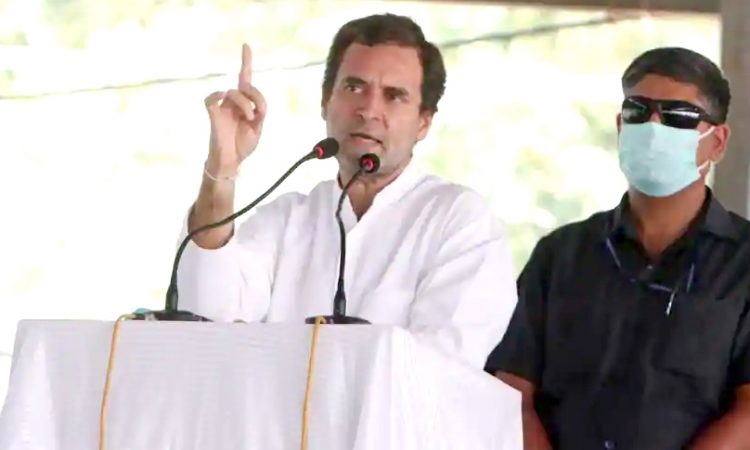 Jaipur, February 12: Congress leader Rahul Gandhi on Friday accused Prime Minister Narendra Modi of trying to clear the path for his “friends” through the three new agri-marketing laws, saying he is threatening farmers when he cannot stand up to China.

Addressing farmer “mahapanchayats” in Pilibanga town of Rajasthan’s Hanumangarh district, he claimed the laws will impact 40 per cent of Indians.
He also referred to the India-China agreement on disengagement of troops in eastern Ladakh, alleging that the Modi government ceded territory between fingers 3 and 4 on the banks of Pangong lake.
He would not stand before China but threatens farmers. This is the reality of Narendra Modi, Gandhi charged.
He addressed another Congress-organised farmers’ meeting in Sri Ganganagar’s Padampur town on the first day of his two-day Rajasthan trip.
Instead of chairs, cots were placed on the dais for party leaders to sit upon in Hanumangarh. In Sri Ganganagar, there were rustic mudda chairs on the dais.
Gandhi said the new laws do not affect just the farmers, adding his party will ensure that they are withdrawn. Even the British couldn’t stand before farmers, he said.
He said Modi should first withdraw the laws if he wants to talk to farmers.
Forty percent of people in the country who include farmers, traders and labourers will be hit by the implementation of the laws, the Congress leader claimed.
They are not just farmers; they are traders, labourers, traders, adhatiyas (middlemen). This is the business of Bharat Mata that feeds the nation, he said in Sri Ganganagar.
“The objective of the laws is to shift the business of 40 percent people to two or three people. What will happen to those who sell grain, fruit and vegetables on roads if only one company starts selling grain, fruit or vegetables of the entire country? he said.
Gandhi said the new farm laws are another blow to the people of the country after demonetisation and the implementation of the Goods and Services Tax (GST).
Earlier, it was the demonetisation and I had said it was not a fight against black money, and the backbone of the country was being broken. But people didn’t understand this at that time, Gandhi said.
After this, the GST was implemented, which was an attack on small and midsize businesses. Narendra Modi wants to clear the way for his friends, Gandhi alleged, without naming anyone but apparently referring to big businesses.
The Congress leader claimed that with the implementation of the new laws, government mandis will shut down and big businessmen will monopolise the purchase of farm produce.
He claimed there will be hoarding.”If a single person wants to purchase the country’s entire grain, it can be done. What mandi system will remain then? he said.
The first law is meant to finish the mandi system. The second law is about unlimited hoarding. It means one person can control prices, he said.
The third law is about snatching the right of farmers to seek justice, he claimed.
Narendra Modi says the laws were brought for farmers. But if this was so, why are the farmers disappointed and agitating and why 200 farmers died, he asked.
The Congress leader was referring to the thousands of farmers now camping at Delhi’s borders for weeks, demanding the repeal of the new laws.
Several have died of various causes, including accidents and suicide in Punjab and Haryana during the protests. But the exact number is unverified.
Farmer unions and opposition parties say the new laws will weaken the minimum support price (MSP) system through which farmers sell their crops in mandis . They claim that the system benefits private businesses.
But the government says the laws give farmers the option to sell their produce anywhere, and they are still free to sell them at mandis at the MSP.
AICC general secretaries Ajay Maken and K C Venugopal, state Congress chief Govind Singh Dotasra, former deputy CM Sachin Pilot and other party leaders attended the event.
Gandhi referred to the call he made during his Lok Sabha speech yesterday for two minutes of silence as a mark of respect to farmers who died during the agitation. He said it is shameful that no BJP MP stood up for it. (PTI)