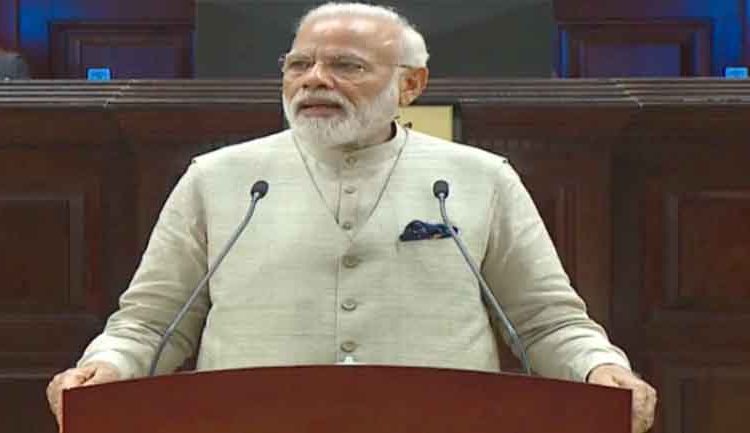 Kolkata, January 11: Dedicating to the nation four refurbished British-era buildings of the city, Prime Minister Narendra Modi on Saturday said the rich heritage of the country will be presented before the world.
The country’s history, written after Independence, has ignored various facets and it is not what we read or write for examinations, Modi said.
In this age of violence, it is very important to awaken our national conscience, he said.
Chief Minister Mamata Banerjee was scheduled to be present at the programme, but she did not go there. City Mayor and senior minister Firhad Hakim attended it.
“Tradition and tourism have a direct link with our culture. To put India on the forefront, we will promote heritage tourism which also has the scope for employment generation. We want to make India a hub of heritage tourism,” the prime minister said here.
He said some of the old museums of the country like the Indian Museum, Kolkata, will be developed to international standards.
“An Indian Institute of Heritage will also be set up with a deemed university status”, the prime minister said while addressing a gathering at the inauguration of renovated heritage Currency Building, founded in 1833.
It is a three-storied building, designed in Italian style, which initially housed a bank. It was named as the Currency Building when the government occupied a large portion of it for its Currency Department in 1868, according to the Archeological Survey of India, Kolkata.
The other three refurbished buildings Modi dedicated to the nation are the Belvedere House, the Metcalfe Hall and the Victoria Memorial Hall.
He said there should be gallery at the Victoria Memorial Hall reserved for patriots of Bengal like Kshudiram Bose, Rash Behari Bose, the triumvirate of Binoy-Badal and Dinesh, Rishi Aurobindo and Netaji Subhas Chandra Bose.
“It is unfortunate, that during the British rule and even after independence, the history of our country that was written ad overlooked several important chapters,” Modi said.
Quoting Rabindranath Tagore, he said, “India’s history is not what we remember and write for examinations. We have seen son killing father and siblings fighting against each other. This is not India’s history.”
In this context, he wondered what the indigenous people of India were doing then. “It seems that they did not exist,” the prime minister said.
Modi, quoting Tagore again, said whenever a difficult time like a storm comes, it is needed to stand up and face it.
“But those who see it from outside, will see the storm only.”
Amid the controversy over the amended Citizenship Act, the prime minister said “In this age of violence, it is needed to awaken national conscience. It is only from this that our culture, history and philosophy have emerged.”
Modi said people of the country have brought changes not with the help of military power, but through movements.
“Politics and military power are short-lived. But the power of art, culture and history is permanent”, he said.
Exhorting Bengal’s intellectual leadership, Modi said people like author Sarat Chandra Chatterjee, social reformers Keshab Sen and Iswar Chandra Vidyasagar, Swami Vivekananda and Rabindranath Tagore had shown the world the power of India.
He said Swami Vivekananda had said the 21st century will belong to India. “Myself and the government will support this and also try to learn from the people of Bengal”.
On another renaissance icon of Bengal, Raja Rammohan Roy, Modi said the country needs to follow his principles.
“We will celebrate his 250th birth anniversary (in 2022) in a year-long programme. It is our duty to preserve our heritage and is one of the key aspects of nation-building, the PM said. (PTI)