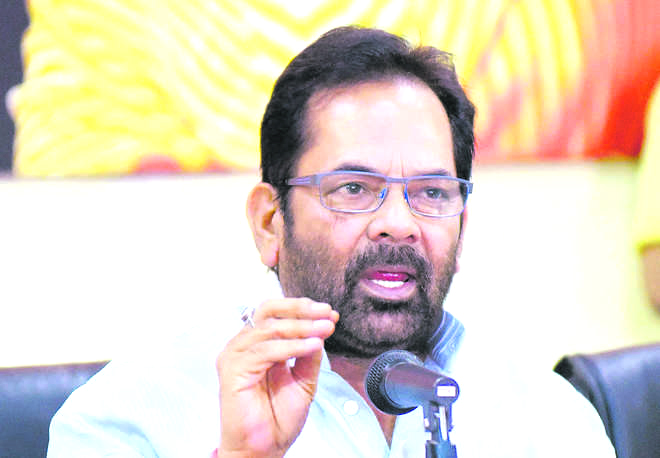 New Delhi, September 18: Prime Minister Narendra Modi removed “feudal” customs and the “red beacon culture” to transform governance which perturbed those who regarded “circumambulation in the corridors of power” as their strength, Union minister Mukhtar Abbas Naqvi said on Friday.
In a blog titled ‘Culture of parikrama replaced by commitment of performance’, the Minority Affairs Minister talked about Modi’s governance style and said the prime minister has opened regular communication channels with ministers and secretaries thereby increasing accountability and responsibility of all.
The prime minister’s governance has perturbed all those who considered “circumambulation in the corridors of power” as their strength and a “passport to success” for the last several decades, he said, in an apparent dig at the Congress.
They have now realised that the “work culture of result-oriented performance” is the only mantra paramount for the Modi government, Naqvi said.
“Before 2014, receiving and seeing the prime minister off at the airport was a ‘loyal custom’ for members of the Cabinet, but this decades old ‘feudal custom’ was given a quick and deserved burial by Modi,” Naqvi said.
Prime Minister Modi also put an end to “red beacon culture” which was synonymous with “snobbery and naked show of power and status”, he said.
“Many MPs/VVIPs used to consider certain subsidies and privileges such as occupying government bungalows even without being a minister or an MP as ‘constitutional right’ or ‘birthright’ and this was abolished firmly and without exception,” Naqvi said.
Many ministries were accustomed to hastily spending the major part of their budgets in the last quarter or even the last month just to meet the March deadline, but Modi has put an end to such “customary and lackadaisical” approach of the government, Naqvi said.
He claimed that the “tradition of work for one day” and “outing for 10 days” which was the “norm” during foreign tours of the prime minister, ministers and bureaucrats was ended by Modi, who has ensured that official overseas travels are result oriented and work focussed.
“Another area of concern had been the hold of middlemen and brokers who kept their links with the personal staff in the offices of ministers intact even after changes in government and ministers, but Prime Minister Modi clipped the wings of these brokers by restricting the tenure of the personal staff of ministers to 10 years overall,” he said.
One much-desired area of reform has been the prestigious Padma awards which were being given purely on political recommendations, but now have become “people’s awards” where they are completely people-driven and the deserving are being honoured, Naqvi said.
Noting that in recent months, India along with almost all other nations of the world has been going through an unprecedented crisis due to the coronavirus pandemic, Naqvi said that like a true leader, Prime Minister Modi has led the fight against this pandemic from the front.
“Timely actions and issuance of pan-India guidelines have helped the nation tackle the Corona challenge and the other challenges that came along such as floods, typhoons and the swarms of ‘tiddis’ (locusts), even as certain ‘fisaddis’ (losers) tried to create confusion,” the minister said. (PTI)