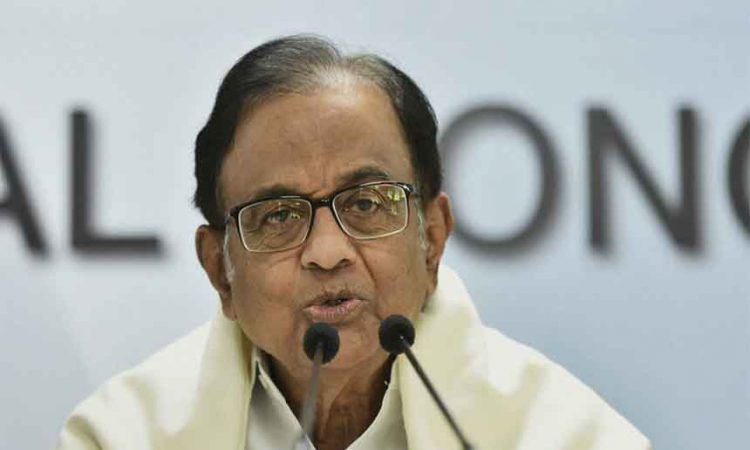 New Delhi, July 25: Senior Congress leader P Chidambaram on Sunday said the government should either call for a joint parliamentary committee probe into the Pegasus snooping allegations or request the Supreme Court to appoint a sitting judge to investigate the matter, and demanded that Prime Minister Narendra Modi make a statement in Parliament clarifying whether there had been surveillance or not.

The former home minister said he was not sure that one can go to the extent of saying that the entire electoral mandate of 2019 was vitiated by the “unlawful snooping” but added that it may have “helped” the BJP to score that victory which has been “tainted” by the allegations.
In an interview with PTI, Chidambaram also said a probe by a joint parliamentary committee (JPC) can be more effective than an investigation by the Parliamentary Standing Committee on Information Technology, asserting that the former would be more empowered by Parliament.
Asked about Parliament IT panel head Shashi Tharoor’s remarks that the subject is already on the mandate of my committee and a JPC is not required, Chidambaram expressed doubts whether the IT panel with a majority of BJP members will allow a full investigation into the matter.
“The parliamentary committee rules are rather strict. For example they cannot take evidence openly but a JPC can be empowered by Parliament to take evidence in public view, to cross examine witnesses, and to summon documents. So I think a JPC will have far more powers than a parliamentary committee,” he said.
At the same time, he said he is not diminishing the role of the parliamentary committee to the extent it can probe the matter and is welcome to do so.
Last Sunday, an international media consortium reported that over 300 verified Indian mobile phone numbers, including of two ministers, over 40 journalists, three opposition leaders besides scores of businesspersons and activists in India, could have been targeted for hacking through the Pegasus spyware of the Israeli firm NSO.
The government has been denying all Opposition allegations in the matter.
On the government’s response to the allegations, Chidambaram referred to IT and Communications Minister Ashwini Vaishnaw statement in Parliament, saying he is obviously a very “clever minister” and therefore the statement has been “very cleverly worded”.
“He (Vaishnaw) denies that there was any unauthorised surveillance. He does not deny that there was surveillance. He does not deny that there was authorised surveillance. Surely the minister knows the difference between authorised surveillance and unauthorised surveillance,” the Congress leader said.
Posing questions for the government, he asked whether there was surveillance at all and whether snooping was done through Pegasus.
“If Pegasus spyware was used, who acquired it? Was it acquired by the government or by one of its agencies,” he asked.
The Rajya Sabha member also asked the government to come clean on the amount paid to acquire the spyware.
“These are simple, straightforward questions which the average citizen is asking and the minister should answer that directly. After all, France has ordered an investigation when it was revealed that President (Emmanuel) Macron’s number was one of the numbers that were hacked. Israel itself has ordered an investigation by its National Security Council,” he said .
If two major countries can order investigation, why should India not order a probe and find answers to the four simple questions, he asked rhetorically.
Chidambaram said the matter also raises issues of national security because, if the government says that it did not conduct surveillance, then the question arises who conducted the snooping.
“Was it a rogue agency in India doing it without the knowledge of the government or was it a foreign agency hacking into Indian telephones without the knowledge of the government. Either way…it is a more serious matter than the government conducting the surveillance,” he said.
Asked about the Opposition’s demand of a Supreme Court-monitored probe and whether the top court should take it up suo motu, Chidambaram said he would not want to comment on what the court may or may not do, but pointed out that there is already a public interest litigation filed by one or two persons, separately, asking it to take suo motu cognisance of the Pegasus revelations.
“Be that as it may, the government should request either Parliament to constitute a JPC or the government should request the Supreme Court to spare an honourable judge to conduct the investigation,” he said.
Asked about Home Minister Amit Shah’s assertion that the allegations were aimed at humiliating India at the world stage, Chidambaram said the home minister chose his words very carefully and did not deny that there was surveillance.
“He (Shah) does not deny that a certain number of telephones in India were hacked using Pegasus software. So, in fact, rather than what the home minister said, what he did not say is more important,” he said.
If the home minister is unable to categorically deny that Indian telephones were infiltrated by the spyware, then obviously he must take responsibility for this “scandal” happening under his watch, Chidambaram said.
Asked about the logjam in Parliament over the issue and calls from Opposition ranks that the PM should make a statement on the Pegasus issue, he said Modi should have made a statement on the first day of Parliament’s Monsoon Session itself when the allegations came to the fore.
“Each minister knows only what is under his department. The PM knows what is happening under all departments. So, it is the prime minister who should come forward and say whether there was surveillance or not and if there was surveillance whether it was authorised or not,” Chidambaram said.

“There are many questions and there will be supplementary questions which only the prime minister can answer. So why should the PM shy away from Parliament, he should come to Parliament and make a statement,” he said. (PTI)