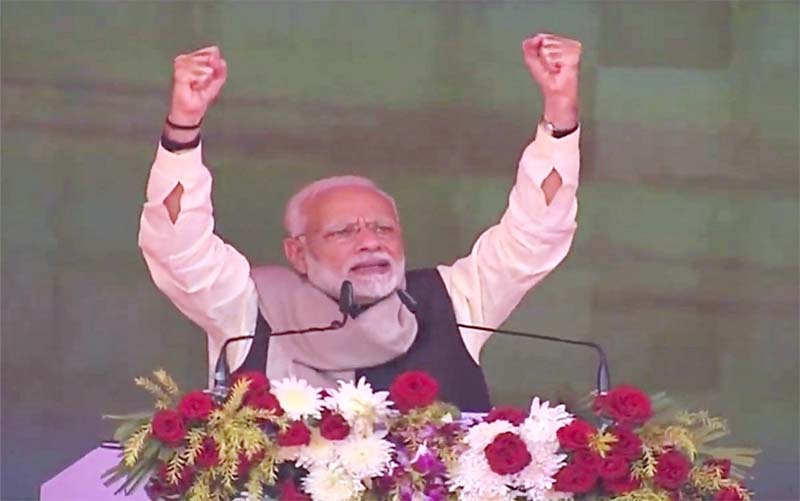 Lucknow, December 16: Setting the tone for the 2019 Lok Sabha elections, Prime Minister Narendra Modi launched a blistering attack on the Congress and the Gandhi family in its political borough of Rae Bareli. He stressed the history of the Congress on defence deals had either a Quattrocchi ‘mama’ (Bofors) or a Christian Michel uncle (Westland Helicopter) involved in them.
Without naming Rafale he sought to know why the Congress was so rattled by the NDA government’s total transparent defence deals. The Congress was being compelled to speak one lie after another in addition to creating an environment of mistrust against the judiciary. Was it because there was no Quattrocchi or Michael in the defence deals of the present regime, he questioned.
Addressing a public rally at the Rae Bareli Cricket ground on Sunday, Modi ripped apart the Congress and its leaders. Quoting a couplet from the Ramcharit Manas the PM said there were some people who continuously spoke a lie in the hope of convincing others about the same. For such people, the defence ministry and the defence minister were liars as also the officers of the Indian Air Force. He knew such people had to abuse him, just as they wanted to besmirch his name. But by doing so why were they playing with the security of the country, the PM sought to know.
He said after the Kargil war the Air Force had spoken about the need for technically advanced aircraft. The Congress ruled for 10 years after the war but made no efforts to strengthen the air force. Why? Who was pressurising the party, he queried.
Modi said the country is facing two aspects. One, of the government which was continuously working for the strengthening of the armed forces. The other, of those who are bent on weakening the nation at all costs. The country was watching that the Congress was standing with such forces which did not want the country’s armed forces to become strong.
He said it amazed him that the speeches made by some people in India drew an applause in Pakistan. It was people of this ilk who raised a question mark over the surgical strikes.
Paying his tributes to the soldiers on ‘Vijay Diwas,’ the PM said December 16, 1971, was an important date in the history of the country. The brave soldiers of the country crushed the forces of terrorism, anarchy, and atrocities. Modi said he was accountable to the families of the soldiers and not to a particular family (read Gandhi Pariwar). Modi said he wanted to remind the people of the Congress’s attitude towards the armed forces. In 2009, a demand was placed for 1.86 lakh bulletproof jackets but till 2014 not a single jacket was bought. When his government assumed power 50,000 bulletproof jackets were bought and handed over to the army and all were made in India.
Continuing with his stringent attack on the Congress, the PM said had the Congress been in power after 2014 the Tejas aircraft would not have seen the light of the day. The UPA government had deliberately kept it on the backburner.
Referring to his visit to the Rae Bareli Modern Rail Coach factory prior to the public meet, the PM said the district was all set to emerge as the global hub of rail coach manufacturing. He added a Rail Industrial Park is being planned in Rae Bareli with both the Railway Ministry and the UP government involved in it.
He lambasted the UPA regime’s ignoring of the coach factory. He said the target of the factory was to manufacture 1000 coaches annually. The factory was built in 2010 but till 2014 coaches from Kapurthala were brought here for painting and screw tightening. Only 3 per cent of the machines were functioning. The NDA government changed the situation and now efforts are on to increase the capacity of the Rae Bareli workshop to 5000 new coaches per year. The Prime Minister said steps would be taken to build Metro rail coaches, semi-high speed train coaches and aluminium coated coaches at the Rae Bareli coach factory so that it emerges as the world’s biggest rail coach factory.
The Prime Minister further attacked the Congress on its promise of loan waiver to the farmers. He said in Karnataka the Congress had promised loan waiver within 10 days, but after six months the facts were otherwise. (Courtesy: TS)