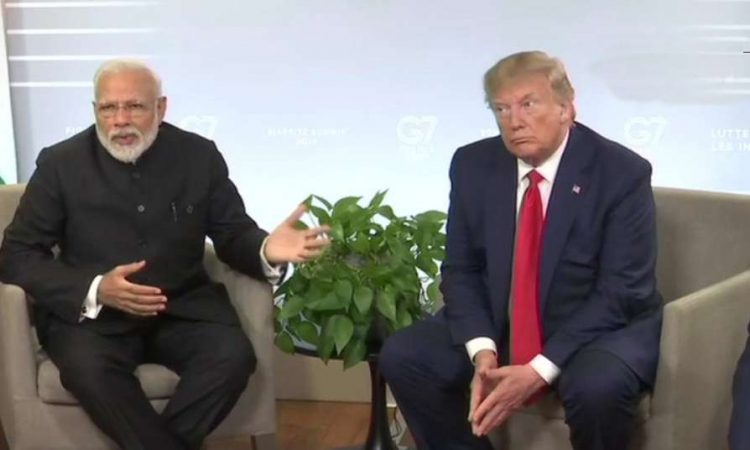 Biarritz/London, August 26: With President Donald Trump by his side, Narendra Modi on Monday categorically rejected any scope for third party mediation on Kashmir, saying it was a bilateral issue between India and Pakistan, and “we don’t want to trouble any third country” — a position that was immediately backed by the American leader who had recently offered to mediate.
In an apparent backtracking from his earlier comments, Trump said he feels that both India and Pakistan can resolve the Kashmir problem on their own. The two leaders appeared together to speak to the media after overnight talks on the sidelines of the G-7 summit and ahead of their formal meeting.
Modi and Trump were meeting for the first time after the Union government revoked Jammu and Kashmir’s special status by abrogating Article 370 and bifurcating the state into two Union Territories. New Delhi’s move was severely criticised by Pakistani leadership, including Prime Minister Imran Khan, who made provocative anti-India statements, triggering tensions in bilateral ties.
“All the issues between India and Pakistan are of bilateral in nature, and we don’t want to trouble any third country. We can discuss and resolve these issues bilaterally,” Modi said.
He said India and Pakistan were together before 1947 and he was confident that the two neighbours can discuss their problems and solve them.
“When I called Prime Minister Khan after the elections, I told him that Pakistan has to fight against poverty, India has to also fight against it. Pakistan has to fight against illiteracy and disease, and India has to also fight against them…I told him we should work together for the welfare of our people,” Modi said.
On his part, Trump said he and Modi spoke about Kashmir “at great length” last night and he feels that both India and Pakistan can resolve it on their own.
“We spoke last night about Kashmir, the Prime Minister really feels he has it (situation) under control. They speak with Pakistan and I’m sure that they will be able to do something that will be very good,” Trump said.
“I have very good relationship with both the gentlemen (Modi and Khan) and I’m here. I think they can do it (resolve the issue) themselves,” he added.
Trump’s comments on Monday are being seen as a total climb-down from the time when he had made a startling claim that Modi has asked him to mediate on Kashmir, the claim was strongly rejected by India. Trump has also offered to mediate between Indian and Pakistan on more than one occasion in recent past.
“Pakistan’s propaganda was dealt the final blow in the meeting between the PM and President Trump. Pakistan was hoping to get some statement which will give it a last ray of hope. The meeting has categorically confirmed that any issue concerning India and Pakistan has to be discussed bilaterally,” BJP spokesperson G V L Narasimha Rao said in New Delhi.
Trump also said,”we are talking about trade, we’re talking about military and many different things. We had some great discussions, we were together last night for dinner and I learned a lot about India.”
Thanking Trump for congratulating him after his recent election victory, Modi said their two countries “share democratic values.”
Later, Trump tweeted that he had “a great meeting with my friend Prime Minister Modi.”
“Excellent meeting with @POTUS @realDonaldTrump! We had useful discussions on bilateral matters. We agreed to address trade issues for mutual benefit soon. Looking forward to expand cooperation as large democracies for the benefit of our citizens and global peace and prosperity,” Prime Minister Modi tweeted.
Briefing the reporters after the talks between Modi and Trump, Foreign Secretary Vijay Gokhale said the two leaders had a “very warm, very positive meeting” which lasted 40 minutes. This was their third interaction since Prime Minister Modi was re-elected in May this year for a second five year term.
When asked about the discussion on the Kashmir issue during the talks, the foreign secretary said there was “no discussion” on it during the bilateral meeting.
To another question, Gokhale said India has not taken any steps to harm the regional stability.
“The normalcy is returning to Jammu and Kashmir,” he said, adding that certain restrictions will remain in place in the state to maintain law and order.
“Their meeting principally focussed on trade and energy,” Gokhale said.
“The prime minister spoke of the importance of energy imports from the US and he referred to the fact that USD 4 billion worth of imports were already in the pipeline and that would be expected to be stepped up,” he said.
During his visit to the US next month to address the UN General Assembly, the prime minister is expected to have a round table with the top CEOs of the US energy companies in Houston, Gokhale said.
“The objective is two fold, first to see how we can import more energy from the US and second is how we can invest in the energy sector in the US,” Gokhale said, adding that President Trump has offered to send a top administration official to the conference to facilitate it.
Later, the White House issued a readout that said the two leaders discussed ways to broaden their strategic partnership and greatly increase trade between the United States and India.
“President Trump reaffirmed the need for dialogue between India and Pakistan to reduce tensions and acknowledged India’s role as a critical partner in Afghanistan,” it added. (PTI)