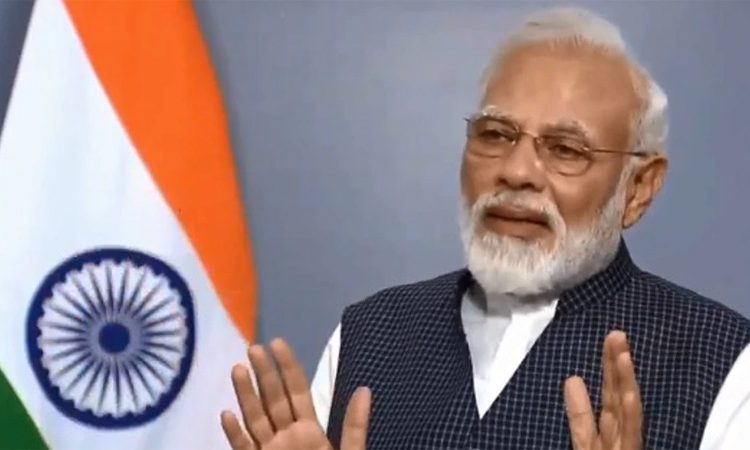 New Delhi, August 8: Reaching out to Kashmiris with messages of hope and optimism, Prime Minister Narendra Modi on Thursday assured them of all round development, early and transparent elections and end to terrorism as he defended scrapping of Article 370, which he asserted, has only given separatism, corruption, family rule and used by Pakistan as a tool to spread terror in Jammu and Kashmir.
In a televised address to the nation three days after the far reaching decision, Modi also sought to assuage concerns of the people after his government bifurcated the state into union territories, saying J&K will not remain UT for long.
With the Kashmir Valley reeling under security clampdown, Modi promised that the government is making all sincere efforts to ensure that the people in the region have no difficulties in celebrating Eid which is on Monday.
“I want to assure friends of J&K that the situation will gradually return to normalcy and their difficulties will ease,” he said, in his nearly 40-minute address.
The prime minister made a strong defence of scrapping the provisions of Article 370, saying the region’s special status offered it nothing but separatism, terrorism, corruption and family rule, while giving a handle to Pakistan to push its divisive agenda.
“We all want that in future J&K assembly elections take place, a new government is formed, new energetic youths become MLAs, ministers and chief minister. I assure people of J&K that with all honesty and in a transparent atmosphere, you will get an opportunity to elect your representatives soon,” Modi said.
Modi also said his government respects objections of those who are opposed to the decision and was working to address them. He, however, asked them to put national interests supreme and help government in giving Jammu, Kashmir and Ladakh a new direction.
“Removal of Article 370 is a reality, and it was a well thought out decision,” Modi said.
Laying out a development agenda for Jammu and Kashmir as well as Ladakh, Modi expressed confidence of rooting out terrorism and separatism under the new system of governance.
“The dream of Shyama Prasad Mookerjee, Atal Bihari Vajpayee, Sardar Vallabhai Patel and crores of Indians has now been fulfiled,” he said.
The Prime minister also asserted that no one has been able to justify how the Article 370 and Article 35A was benefitting people of J&K.
Attacking Pakistan, which has termed India’s move as “unilateral and illegal” and strongly protested by downgrading diplomatic ties, Modi said Pakistan used Article 370 as a “tool to spread terrorism”.
“In last three decades, over 42,000 people lost their lives,” he said.
He also said over 1.5 crore people of J&K were being denied benefits of legislations meant for the entire country.
Spelling out his government’s development plans for J&K, he said government employees including police will soon get benefits on par with employees of other Union Territories and all vacant posts in J&K, and Ladakh will be filled, creating employment opportunities.
He also assured people of J&K that they will soon get opportunity to elect their representatives in a transparent way.
“As J&K will see more and more development. I do not think it will remain Union Territory for long. Ladakh will remain the UT,” Modi said.
Earlier this week, the Union government revoked Article 370 to withdraw special status to J&K and bifurcated the region into two UTs –Jammu and Kashmir, Ladakh. They also got a Parliament nod for it. (PTI)