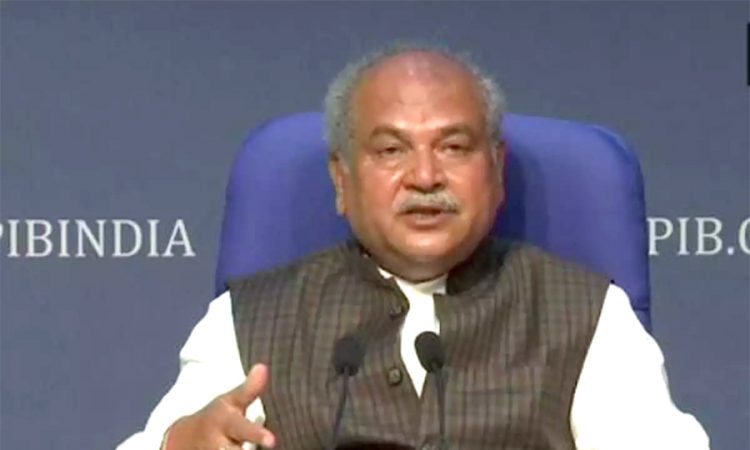 Amid the farmers’ protests against the agriculture laws, Tomar in the interview asserted that according to PM Modi “the solution should be found out after discussion with farmers”. Thousands of farmers have been staying put at Delhi border points — Singhu, Tikri, Ghazipur and Chilla (Delhi-Noida) — for nearly two weeks against the Centre’s new farm laws.
“PM Narendra Modi has discussed this matter with us. He told us that the solution should be found out with the discussion with farmers. He is concerned with the farmers’ issue. PM Modi has made several plans for a farmer like Pradhan Mantri Shram Yogi Maandhan Yojana for farmers to help them in their old age, stated Tomar.
In the interview with Zee News, he said, “I would like to request agitating farmers on the proposed issue. The government has forwarded them a draft but they are yet to respond. The farmers should leave the path of protest as the Centre is ready with an open mind to listen to their concerns.”
On the suggestion of having a meeting with farmers at Singhu border, Tomar said, “I don’t have any objection to it. I have been talking to Kisan Union leaders, if they allow, I’m ready to be present there to hold talks with them.”
He also said, “On MSP, when we were discussing, I assured in Parliament that this will continue and even PM Modi assured the nation that it will continue. We framed these laws that private investment should reach rural areas and farmers should get the benefit. Farmers are the biggest producer but so far he has no right to sell his products.”
“We have told farmer union leaders that state governments can register private mandis and impose cess or tax so that a level playing field can be created. Farmers said that SDM is lower-level official, therefore we have said that they can approach civil court. When farmers will shift to high monetary yield crops, they will get help and be attracted through these reforms,” added Tomar.
“Majority of these farmers are able to understand the concerns of the government, but there are certain elements with their vested agenda are perhaps hampering the talks. Earlier, the talks were held in a positive atmosphere, but there are certain people who are not interested in a solution rather they want to take advantage of this movement,” highlighted Tomar.
He added, “In this movement, I could see faces of Left and those element involved with Delhi riots, trying to intrude. I would request farmers to save their movement from them?. They would hamper the interests of farmers. In the coming days, there are reports that some secessionist forces are trying to create violence. I’m keeping a tab on such developments. The Union leaders have promised me that they will not allow any such element to take advantage of their stir.”
Tomar stated, “Through food processing, farmers will get maximum benefit. After Independence, there has been a lot of changes but in agriculture, these reforms were lacking. Through these new farm laws, they would be benefitted.”
“I am pained to say that in Lok Sabha and Rajya Sabha, members had expressed their opinions but never objected to any provision. On repealing of laws, this question arises when the govt is not ready to discuss but when we are ready with an open mind to discuss all issue there is no question of taking these laws back,” added Tomar.He added, “I come from a farmer family, had I been a farmer, I would have supported these new farms laws as they would assist small farmers to do profitable agriculture. In the whole country, during the bandh, it failed to have an extensive impact even in Punjab and Haryana.” (Zee News)