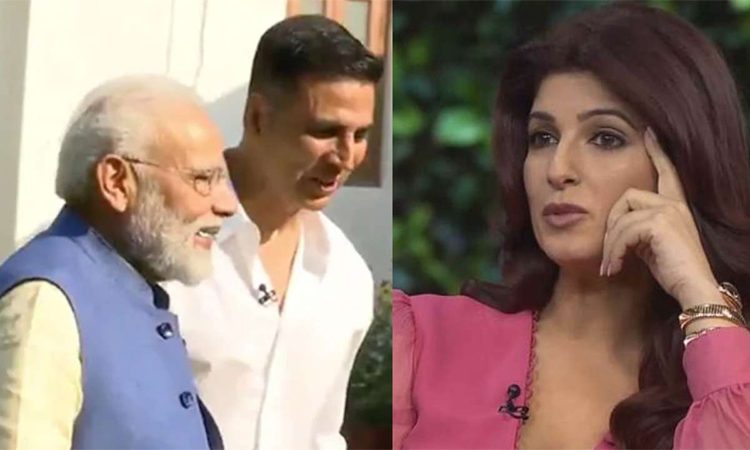 Akshay Kumar sought to bring a “breather” in the election time, as he had a “candid and completely non-political” conversation on camera with Prime Minister Narendra Modi at his residence. The PM was seen discussing everything under the sun, apart from the elections.
While the motive and the interview have come across as part of the BJP’s election strategy to channelise star power in whatever way possible, from naming actors as prospective candidates from the party to now this interview, many have also appreciated the “candidness” of the man who rose to become the PM in 2014 and led his party to a majority win.
During his chat, the actor asked the PM if he followed people on Twitter and the conversations taking place on the platform.
In response, the PM said: “Main aapka bhi Twitter dekhta hoon aur Twinkle Khanna ji ka Twitter dekhta hoon. Kabhi Kabhi toh mujhe lagta hai ki vo mere upar gussa nikaalti hai Twitter pe, toh uske kaaran aapke parivaarik jeevan mein badi shaanti rehti hogi. Unka pura gussa mujpe nikal jaata hoga isliye aapko araam rehta hoga. Toh is prakaar se main aapke kaam aaya hoon (laughs). (I look at your Twitter and Twinkle Khanna ji’s Twitter too. Sometimes I feel since she vents all her anger on me on Twitter, your domestic life must be peaceful. So this is how I have been of use to you).”
He also added that he met Twinkle Khanna’s paternal grandfather Chunnibhai Kapadia many years ago in Gujarat with whose help (through a donation) a chach (buttermilk) kendra was started.
The official Twitter handle of the BJP posted a message sharing the PM’s quote mentioning the “relationship” of Akshay and his wife Twinkle. Moments later, Twinkle Khanna responded to it in a tongue-in-cheek comment. Sharing the BJP post, she wrote: “I have a rather positive way of looking at this-Not only is the Prime Minister aware that I exist but he actually reads my work .”
Khanna who is popularly known as MrsFunnyBones has on numerous occasions criticised the BJP government in the past. From levy of taxes on sanitary napkins to freedom of speech, she has targeted the establishment on several issues through satire at public fora and through her columns and blogs.
Her comment to the PM’s answer is being appreciated by many on social media, while many thought she would hit back considering her political opinions have clashed with her husband, Akshay Kumar, on numerous occasions in the past.