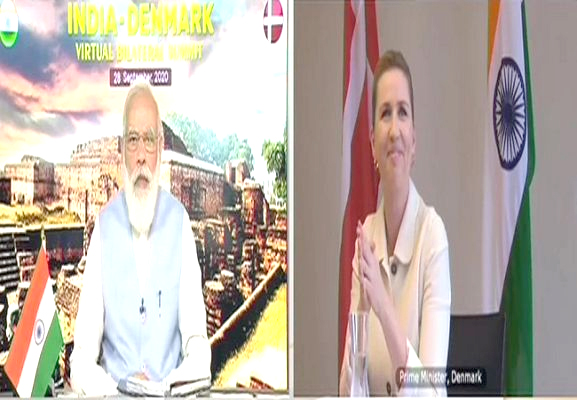 NEW DELHI, September 28: The coronavirus pandemic has shown the risk involved in excessive dependence of the global supply chain on any single source, Prime Minister Narendra Modi said during a virtual bilateral summit on Monday with his Danish counterpart Mette Frederiksen.
The prime minister said India is working with Australia and Japan to diversify the supply chain, noting that like-minded countries are welcome to join the initiative.
In his opening remarks at the summit, Modi also said the events of the last few months have brought forth the need for countries believing in transparency, democratic value system and rules-based order to work together.
“The pandemic showed the risk involved in excessive dependence of the global supply chain on any single source,” Modi said without naming any country or source.
The prime minister also highlighted the government’s ‘Aatmanirbhar Bharat’ (self-reliant India) initiative as well as various reform measures in the areas of agriculture, taxation and labour market.
“We are focusing on all-round reforms under the (Aatmanirbhar Bharat) initiative,” he said, adding companies working in India will be benefited from regulatory and taxation reforms.
Denmark is a key country in Northern Europe with whom India’s bilateral trade ties witnessed a significant expansion in the last few years.
According to official figures, bilateral trade in goods and services between India and Denmark grew by 30.49 per cent between 2016 and 2019 as the trade volume rose from USD 2.82 billion to USD 3.68 billion.
Around 200 Danish companies have invested in India in sectors such as shipping, renewable energy, environment, agriculture and food processing.
Nearly 5,000 Indian professionals are working in major Danish companies, while 20 Indian IT companies are operating in Denmark for decades, according to official data.
Major Danish companies such as Grundfos, Danfoss, Vestas, LM Wind, Novozymes, Rockwool, Haldor Topsoe, etc. have set up factories and manufacturing facilities in India under the ‘Make in India’ scheme. (PTI)