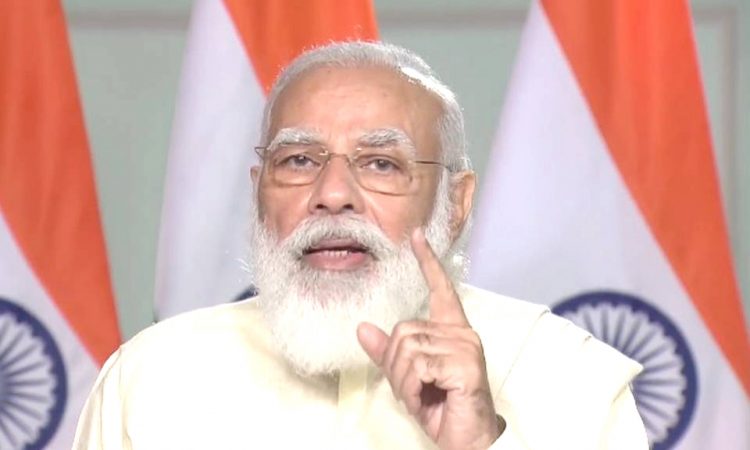 New Delhi, January 16: Prime Minister Narendra Modi interacted with founders of start-ups from across the country and the world as he addressed an international summit via video conferencing on Saturday. During the event, PM Modi lauded the founders and said they have the “capability to change the future”.

“Earlier, on hearing about a startup people used to ask ‘why don’t you do a job?’. But now people say why not create a start up instead of doing a job,” PM Modi also said.
He also said that ‘This is the age of digital revolution, new-age innovation’ and it is the “demand of the time that future entrepreneurs should be from Asian countries.” “Future technology should come from Asian labs,” he also said.
PM Modi further noted that “these startups are changing the demographic character of business.”
“India is one of the biggest startup ecosystems in the world. More than 41,000 startups incl nearly 5,700 startups in IT sector, 3,600 in the health sector and 1,700 startups in agriculture are engaged in work. These startups are changing the demographic character of business,” he also said.
During the event the Prime Minister also announced “start-up India seed fund” under which the government will give one thousand crore rupees to new entrepreneurs as sup
“We are launching a ?1,000 crore Start-Up India Seed Fund to help new startups grow in the country. We are trying to create a startup system which is based on the mantra ‘of the youth, by the youth, for the youth,'” PM Modi said as he launched the policy.
PM Modi also said, “Startups powered India’s drive for being self-reliant amid the pandemic when major companies were thinking about survival.”
The Prarambh: Startup India International Summit is being organised by the Department for Promotion of Industry and Internal Trade of the Union ministry of commerce and industry from January 15-16. Saturday is the second and final day of the summit that aims to reimagine the importance of collaboration between countries to further startup ecosystems.
The first day of the event yesterday brought some of the world’s leading minds on one platform and enabled government and international organizations to share their views to ignite the minds of young innovators and entrepreneurs.
The summit was yesterday inaugurated by Piyush Goyal, minister of commerce and industry.
Over 1,20,000 registrations were seen on the first day and witnessed the participation of renowned stakeholders from startup communities who engaged in multilateral discussions and showcased the best of their innovations.
A closed-door roundtable was also hosted with emphasis on internationalization for startups and mobilizing global capital for Indian startups while promoting ease of doing business for global venture funds. (Agencies)