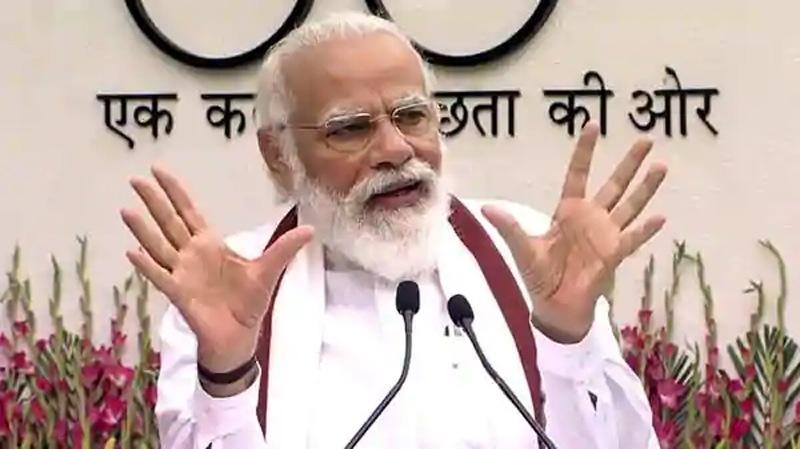 New Delhi, August 8: Prime Minister Narendra Modi on Saturday launched a week-long garbage-free India campaign in the run up to Independence Day and asserted that the Swachh Bharat Mission has been a big support in the fight against coronavirus.
He also launched the Rashtriya Swachhata Kendra, an interactive experience centre on the Swachh Bharat Mission at the Gandhi Smriti and Darshan Samiti at Rajghat.
In his speech, Modi urged children, who attended the event, to follow social distancing norms and wear masks to guard against coronavirus.
The ‘Gandagi Mukt Bharat’ drive begins on Saturday and would go on till Independence Day to re-enforce the ongoing campaign on cleanliness and sanitation.
“Imagine the situation if a COVID-19-like pandemic had hit us before 2014. Due to lack of toilets, could we have checked the spread of the infection. Had lockdown been possible when 60 per cent of the population was forced to defecate in open,” the prime minister observed.
He also said that the Swachh Bharat Abhiyan (clean India mission) has been a big support in the fight against coronavirus.
The Modi government came to power in 2014 for the first time and retained it in 2019 Lok Sabha elections.
The prime minister said the week-long campaign is to “honour swaraj (self-rule), meaning ‘gandagi Bharat choro saptah’ (garbage quit India week)”, and reminded that August 8 is the anniversary of Quit India Movement.
An official statement issued by the Prime Minister’s Office named the drive as ‘Gandagi Mukt Bharat’ campaign.
The prime minister urged officials at the district level to construct toilets in all the villages under them and to repair the existing facilities during the week.
He said areas where migrant workers from other states are residing should get priority.
“Together, we have to move forward … preparing compost out of dirt, water recycling, getting rid of single-use plastic,” he said.
What would be better than things which weaken the country quit India he said adding that for the past six years, his government has been working on a massive quit India campaign.
“Poverty, compulsion to defecate in open, single use plastic, discrimination, terror and violence, corruption, finding water with great difficulty have to quit India,” he explained.
Before the address, he interacted with school students and asked them to be careful against coronavirus. He said following social distancing norms, not spitting in open and wearing masks were some of the things necessary to combat the pandemic.
He also said children have been a great strength in carrying forward the Swachh Bharat Mission.
A tribute to Mahatma Gandhi, the Rashtriya Swachhata Kendra was first announced by the prime minister on April 10, 2017 to mark the centenary celebrations of Gandhi’s Champaran Satyagraha.
Modi reminisced the journey of the Swachh Bharat Mission and dedicated the RSK as a “permanent tribute” to Mahatma Gandhi.
He lauded the people of the country for making ‘swachhata’ (cleanliness) a ‘jan andolan’ (mass movement) and urged them to continue to do so in the future.
He reiterated the importance of cleanliness and sanitation in our daily lives, especially during fight against coronavirus.
Modi expressed satisfaction that due to Gandhi’s inspiration, lakhs of Swachhagrahas (those working for the cleanliness drive) have made the Swachh Bharat Mission a target of their lives.
This is the reason that in 60 months, nearly 60 crore Indians have toilet facility. He said it boosts confidence of people, especially women. (PTI)