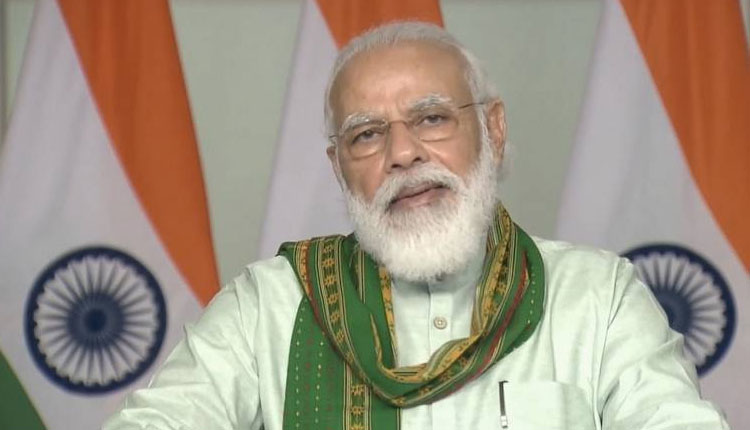 New Delhi, August 9: Asserting that the government’s agri-reforms are focussed on empowering small farmers, Prime Minister Narendra Modi on Sunday launched a financing facility of Rs 1 lakh crore under the Agri-Infra Fund that will help create post-harvest infrastructure in villages and generate jobs.
He also said the country does not face problems in farm production but in post-harvest losses, and therefore efforts are being made to strengthen post-harvest infrastructure facilities and ensure better income for farmers.
Legal hurdles are being removed and major push for agri-reforms are being given to encourage investment in rural India for creating post-harvest linkages, he added.
Modi launched the Agriculture Infrastructure Fund through a video conference on the auspicious occasion of ‘Balram Jayanti’, a day when farmers worship plough. Agriculture Minister Narendra Singh Tomar and farmers from some states also participated in the video conference.
“On this auspicious occasion, a special fund of Rs 1 lakh crore has been launched to create agriculture-related infrastructure facilities in the country. This will help in creating better storage facilities and modern cold storage chains in villages. Many employment opportunities will get created in villages,” Modi said after the launch.
The prime minister reiterated that India has a huge opportunity to invest in post-harvest management solutions like warehousing, cold chain and food processing, and build a global presence in areas such as organic and fortified foods.
He also mentioned that this scheme provides a good opportunity for startups in agriculture to avail the benefits and scale their operations, thereby creating an ecosystem that reaches farmers in every corner of the country.
Modi also interacted with farmers from Karnataka, Gujarat and Madhya Pradesh who are among the initial beneficiaires of the credit facility under this new fund through Primary Agricultural Credit Societies (PACS) for creating post-harvest facilities.
Under the Agri-Infra Fund, about Rs 1 lakh crore will be sanctioned under the financing facility in partnership with multiple lending institutions as loans to PACS, farmer groups, Farmer Producer Organisations (FPOs), agri-entrepreneurs, startups and agri-tech players.
Already, 11 of the 12 public sector banks have signed initial agreements with the Ministry of Agriculture.
Under the fund, about 3 per cent interest subvention and credit guarantee of up to Rs 2 crore will be provided to the beneficiaries to increase the viability of the projects.
Loans will be disbursed in four years starting with a sanction of Rs 10,000 crore in the current year and Rs 30,000 crore each in the next three financial years.
Citing reasons for poor investment in agri-infrastructure, the prime minister said there was “negligible” investment due to legal hurdles in the wake of a provision of stock limit under the Essential Commodities (EC) Act.
“Now, we have surplus production. The stock limit not only affects the farmers but also the country’s economy and consumers. But surprisingly the law (EC Act) was still continuing when we have become a surplus producing nation. This law is not required now,” he said.
This law was creating hurdles in setting up of good gowdowns and farm industry in villages. “Unfortunately, babus misused this law to threaten traders and investors. Now, traders and investors are freed from this threat,” he said.
They can now set up modern agri-infrastructure taking credit facilities under the new fund, he added.
The prime minister said the government has brought two ordinances that allow farmers to sell their produce outside mandis and even enter into an agreement directly with companies for sale of their produce.
Despite demand being there, the reforms were undertaken now because it was felt that when the non-agri industries have the right to fix price for their products and sell anywhere in India, why cannot farmers be given a similar freedom.
“Why don’t farmers get similar facilities? Why is this injustice happening with farmers? It is not that a soap factory set up in a city will sell the product in that city’s vicinity. Soap can be sold anywhere. In agriculture, it was not happening. Farmers sell their produce in local mandis alone,” he said.
Modi questioned if there are no middlemen in other industries, why should they be present in the farm sector. If infrastructure is developed to boost industrial growth, then why shouldn’t modern infrastructure be developed in the agriculture sector, he asked.
The government is addressing these issues as part of ‘One Nation One Mandi’ initiative being implemented for the last seven years which is now getting completed, he added.
Among other steps being taken to ensure a better market to farmers, the prime minister said the government is encouraging creation of 10,000 FPOs, and funding 350 agri-startups to become agrientrepreurs. The government has also launched ‘Kisan Rail’ to prevent farmers from distress sale of their produce.
He also lauded farmers for their hard work in the pre- and post-COVID-19 lockdown period to ensure smooth food supplies.
“It is due to their hard work that we have been able to provide free foodgrains to 80 crore poor beneficiaries (via ration shops),” he said.
He also asked farmers to continue maintaining social distancing and wear face masks amid the COVID-19 pandemic. (PTI)