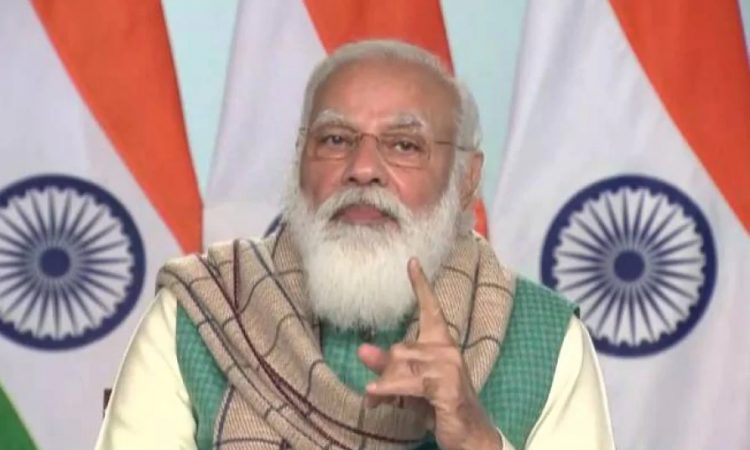 Ahmedabad, February 6: Prime Minister Narendra Modi on Saturday praised the country’s judiciary, saying that it has performed its duty well in safeguarding people’s rights and upholding personal freedom, and added that it has also strengthened the Constitution.

He said the Supreme Court in India has conducted the highest number of hearings via video-conferencing from among the top courts of all the countries in the world during the coronavirus pandemic.
Modi also said that in order to make the country’s justice system future-ready, the possibility of using Artificial Intelligence (AI) was being explored.
He was speaking after virtually releasing a commemorative postage stamp on the Gujarat High Court for sixty years of its establishment.
“Every countryman can say that our judiciary has worked with firmness to uphold our Constitution. Our judiciary has strengthened the Constitution by its positive interpretation,” Modi said.
“The Supreme Court has conducted the highest number of hearings through video-conferencing in the world during the pandemic,” he said.
Through constructive and creative interpretation of the Constitution, our judiciary has strengthened the Constitution itself, he added.
“Whether it is to safeguard the rights of citizens, question of personal freedom, or a situation wherein the interest of the country is to be given top-most priority, the judiciary has both understood and fulfilled its responsibilities,” he said.
He said the root of good governance is in law, as has been held in the ancient Indian scriptures, he said.
“This idea has been a part of our ‘sanskar’ since ancient times. This mantra gave moral strength to our freedom struggle, and the makers of our Constitution also gave it top priority,” he said.
This trust towards the judiciary has given confidence to the common man, given him the strength to stand for truth, Modi said.
The prime minister said that “the proud structure of justice stands on the pillar of Bar”.
“Since decades, bar and judiciary have together been fulfilling the basic purpose of justice in our country,” he said.
Modi also highlighted that the Gujarat High Court became the first court in India to start live streaming of proceedings during the pandemic.
“For us, it is a matter of satisfaction that the digital infrastructure created by the justice department under its e-court integrated mission mode has in such a short span of time helped our courts work in virtual mode,” he said.
“Digital India mission is rapidly modernizing the justice system. Today, more than 18,000 courts have been computerised in the country. With video-conferencing and tele-conferencing getting legal sanctity from the Supreme Court, e-proceedings have gained pace across all courts.
“We feel proud to hear that our Supreme Court has become the top among the apex courts in terms of conducting hearings through video conferencing,” he said.
Facilities like e-filing of cases, unique ID and QR codes to access case details, have given a new dimension to ease of justice, he said.
Talking about the National Judicial Data Grid (NJDG), Modi said that the system will help lawyers and litigants see cases and orders with a click of mouse.
“This ease of justice is not only improving the ease of living of our people, but has also helped in ease of doing business. This has given confidence among foreigners that their judicial rights will be safe in India. In its 2018 ease of doing business report, the World Bank has also praised the NJDG,” he said.
The PM said that a Supreme Court committee and National Informatics Centre (NIC) are working together to further ease the justice system in India.
“To make our justice system future-ready, the possibility of Artificial Intelligence (AI) is also being explored,” he said.
“With AI, the efficiency and speed of judiciary will increase. In these efforts, the country’s Atmanirbhar Bharat campaign is going to play a big role. Under it, the video conference platform is also being encouraged,” he said.
Modi said that e-seva kendras are also being opened in the high courts and district courts to bridge the digital divide.
He said e-Adalat has become “timely and convenient means of justice”.
During the pandemic, online e-Lok Adalat has become a new normal, he said.

Modi further said the first Lok Adalat was held in Junagadh in Gujarat around four decades back and it was the first state to begin evening courts and took many initiatives for the benefit of the poor.
Modi praised judiciary for presenting an excellent example of its dedication and duty during the COVID-19 pandemic period, by dispensing justice through video conferencing, SMS callout, e-filing and e-mail my case status services, streaming on court’s display boards, uploading of orders on the daily basis, and others.
Union minister Ravi Shankar Prasad, Supreme Court judge Justice M R Shah, Gujarat HC Chief Justice Vikram Nath, state Chief Minister Vijay Rupani and others attended the event. (PTI)