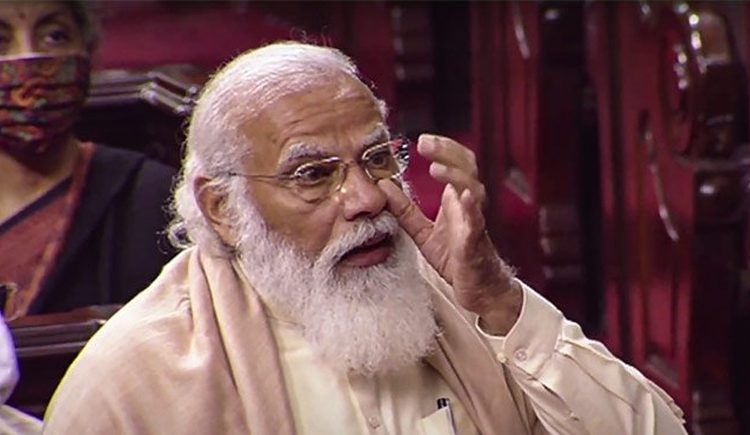 New Delhi, February 9: Prime Minister Narendra Modi broke down several times in the Rajya Sabha on Tuesday while reminiscing about his close association with Congress leader Ghulam Nabi Azad whose term is coming to an end next week.

The prime minister was participating in the farewell speech for Leader of Opposition Azad and three other members from Jammu and Kashmir — Nazir Ahmad Laway, Shamsher Singh Manhas, Mir Mohammad Fayaz– whose terms in the Upper House are coming to an end.
Modi said it would be difficult for anyone to fill the shoes of Azad as he cared not only about his political affiliation but also about the country and the House.
“I worry that after Azad whosoever will take over from him will have to fill very big boots because he cared not only about his party but about the country as well as the House. This is not a small thing, this a big thing,” Modi said.
He noted that Azad had called him to ask for an all party meeting during COVID-19 period.
“I liked that and also did it. This kind of connection is there because he has the experience of both being in power and in opposition. Twenty-eight years experience in all, it is a big thing,” the prime minister said.
Reminiscing about their long association, Modi said that as chief ministers of Jammu ad Kashmir and Gujarat, both of them kept in touch with each other.
Sharing details of their communication during a terrorist attack on some Gujarati pilgrims in Jammu and Kashmir, Modi said Azad was the first one to call him about the incident.
With tears rolling down his cheeks, Modi said that Azad cried on the call while informing him about the horrific attack.
“Azad was the first person to call me. During that call he could not stop crying,” Modi said with a choked voice as tears rolled down from his eyes.
Azad later went to the airport when the bodies were sent back and kept in touch till the plane landed in Gujarat, Modi said.
“Power comes and goes but (only a few know) how to digest it…therefore like a friend, I respect him on the basis of the things he has done over these years,” Modi said while wiping his tears and saluting Azad.
Modi said he believes that Azad’s concern for his country won’t let him sit and whatever responsibilities he takes in the future would be beneficial for the nation.
“At a personal level, I would request him to not believe that he is not in the House. My door is always open for all of you. I will always expect and value your inputs,” he said.
“I will not let you become weak,” the prime minister told Azad as he closed his comments.

Earlier, Rajya Sabha Chairman M Venkaiah Naidu described Azad as a voice of sanity in public life over few decades when he made valuable contributions while serving both in government and in opposition.
Azad retires from Rajya Sabha on February 15 after being the leader of opposition for over six years since June 8, 2014.
Naidu said Azad’s retirement is particularly painful with the House having lost Sushma Swaraj and Arun Jaitley. (PTI)