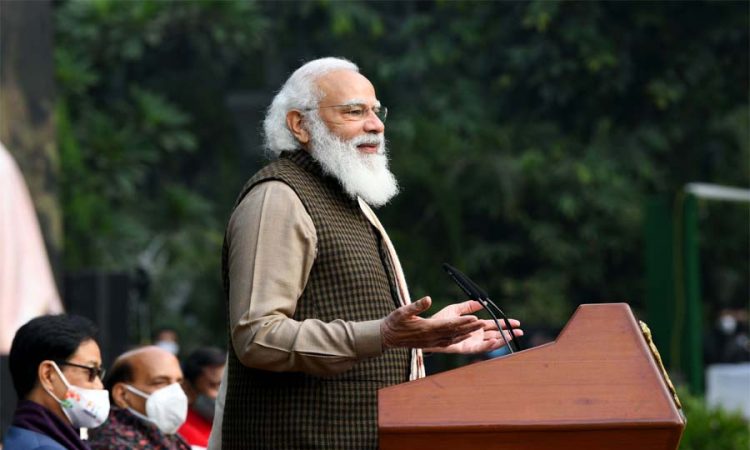 New Delhi, January 24: Prime Minister Narendra Modi on Sunday said Indian scientists have done their duty by developing the COVID-19 vaccine and “now we have to fulfil ours” by defeating through the right information every network spreading lies and rumours about the vaccination.

Addressing tribal guests, National Cadet Corps (NCC) cadets, National Service Scheme (NSS) volunteers and tableaux artists who would be a part of the upcoming Republic Day parade, Modi said such youth organisations have always played a role in dealing with challenging times.
“In COVID times also, the work done by you is laudable. When the government and administration needed it, you came forward as volunteers and provided help,” he said at the At Home’ event.
“Whether it was spreading awareness about the Aarogya Setu App or coronavirus infection spread, the work done by you was praiseworthy,” Modi said.
The prime minister said the youths should now step forward to assist in the COVID-19 vaccination programme by providing the right information to the people.
“You need to take it to the next level now. Your reach is in all parts of society. I request you to come forward to help the country with the COVID-19 vaccination programme. You have to provide the right information on vaccines to the poor and general public,” Modi said.
“Indian scientists have done their duty by developing the coronavirus vaccine and now we have to fulfil ours. We have to defeat every network spreading lies and rumours with the right information,” Modi said.
He also said that India will achieve self-reliance by the actions of the youth who have to be armed with necessary skills.
“India will not become ‘aatmanirbhar’ (self-reliant) just by somebody saying so, it will become so by the actions of youths like you. You will be able to do this better when you will have the necessary skill set,” Modi said.
Realizing the importance of this, the ministry of skill development was formed when his government came in 2014 and more than 5.5 crore youths have been given training for different skills till now, Modi said.
Under the skill development programme, not just training, but also help is being provided for self-employment and employment, the prime minister said.
The aim is that the youths in India get new employment opportunities based on their skill sets, Modi said.
This focus on skill development is evident in the new National Education Policy where the application of knowledge is stressed upon, he said, adding that flexibility in choosing subjects is a key aspect of the policy.
The policy marks the first serious effort to bring vocation education into the mainstream of education, Modi said.
From class six onwards, students will have the option of selecting a course in line with their interests and local needs and business, he said.
Later at the middle level also, an integration of academic and vocational subjects is proposed, the prime minister pointed out.
Modi told his young guests that India is an embodiment of the collective strength of aspirations of its countrymen.
He said India means “many states-one nation, many communities -one emotion, many paths-one goal, many customs-one value, many languages-one expression and many colours-one tricolour”.
Modi appealed to the young guests from various parts of the country to work towards raising awareness about each other’s customs, cuisine, languages and art.
The prime minister said that Ek Bharat-Shreshth Bharat’ sentiment will give strength to the local for vocal’ movement.
“When one region will feel pride in the product of the other region and will promote it, only then the local product will have a national and global reach. The success of vocal for local’ and ‘Aatamnirbhar Abhiyan’ is dependent on our youth,” Modi said.
The prime minister said the participation of the tribal guests, artists and the NSS and NCC cadets in the Republic Day Parade fills every citizen with energy and their display of the country’s rich diversity evokes a feeling of pride.

The Republic Day Parade is a tribute to India’s great socio-cultural heritage and to the Constitution that gives life to the world’s biggest democracy, Modi said.
He noted that this year India enters the 75th year of independence, celebrates the 400th Prakash Purab of Guru Teg Bahadur and also marks the 125th birth anniversary celebrations of Netaji Subhas Chandra Bose.
“These events inspire us to rededicate ourselves to the cause of the country,” the prime minister said.
Union Ministers Rajnath Singh, Arjun Munda, Kiren Rijuju and Renuka Singh Saruta were among those present.
“Today, very special people came to 7, Lok Kalyan Marg. Had a wonderful interaction with NCC Cadets, NSS Volunteers, Tableaux Artists and youngsters from tribal communities,” the prime minister tweeted after the event. (PTI)