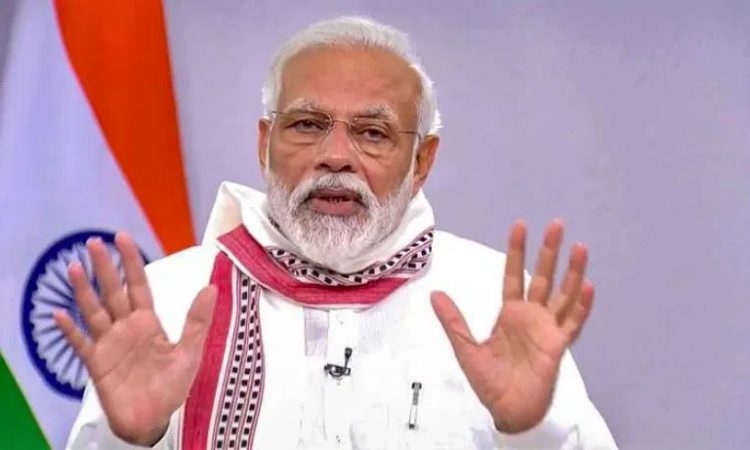 New Delhi, May 12: In a big push to revive the COVID-hit economy, Prime Minister Narendra Modi on Tuesday announced massive new financial incentives on top of the previously announced packages for a combined stimulus of Rs 20 lakh crore, saying the coronavirus crisis has provided India an opportunity to become self-reliant and emerge as the best in the world.
Apart from the Reserve Bank of India (RBI) assistance, the government had last month announced a Rs 1.74 lakh crore to provide benefits to the poor, including cash transfers, Rs 50 lakh insurance cover and steps to ensure food security.
In a televised address to the nation, Modi also said there will be a fourth phase of the lockdown which will be very different from the earlier three phases. The third phase of the 54-day lockdown is scheduled to end on May 17.
About the financial package, the prime minister said it will be around 10 percent of the GDP and “will play an important role in the Atmanirbhar Bharat Abhiyan’ (self-reliant India campaign), adding that the “announcements made by the government so far, the decisions of the RBI and today’s package totals to Rs 20 lakh crores”.
The special economic package will have emphasis on land, labour, liquidity and laws, and will be for “our labourers, farmers, honest tax payers, MSMEs and cottage industry”, Modi said.
This package of Rs 20 lakh crore will give a new impetus to the development journey of the country in 2020 and a new direction to the self-reliant India campaign, the prime minister said and observed that the crisis has taught the country the importance of local manufacturing, local market and local supply chains.
“All our demands during the crisis were met locally. Now, it’s time to be ‘vocal’ about the local and help these local products become global,” he said.
India’s self-reliance will be based on five pillars — economy, which brings in “quantum jump” and not incremental changes, infrastructure, technology driven system, vibrant demography and demand, he said.
The prime minister also hinted at big-ticket economic reforms in coming days, and said beginning Wednesday, Finance Minister Nirmala Sitharaman will announce details of the special economic package.
Modi said getting fatigued or exhausted was not an option in confronting the unprecedented challenge posed by the pandemic and India has to make sincere efforts to become a self-reliant nation by transforming the crisis into an opportunity.
Asserting that just one virus has destroyed the world, Modi said the pandemic has provided an opportunity to India to become self-reliant and emerge as a powerful country globally in the 21st century.
“We are standing at a crucial juncture. This crisis has a message for us. It has provided us an opportunity,” he said, asserting that “we have to protect ourselves and move ahead as well”.
India’s self-reliance addresses concerns about world’s happiness, cooperation and peace, Modi said, adding medicines supplied by India have infused new hopes in the world which is fighting the battle of life and death.
He said when the crisis began, not a single Personal Protective Equipment (PPE) kit was made in India and today the country was producing PPEs.
India’s self-reliance will be different from being “self-centred”, and it will contribute to global happiness and peace, he said.
The prime minister’s address to the nation came a day after he held a marathon six-hour meeting with chief ministers on the road ahead after May 17 when the 54-day nationwide lockdown is due to end.
There have been growing demands by industries, workers and several political leaders to withdraw the lockdown as it has been having a devastating effect on the economy and livelihoods of a large section of people.
During their interaction with Modi on Monday, several chief ministers favoured extending the lockdown while a number of others pitched for allowing economic activities to resume to provide relief to millions of poor hit by the stringent measure.
Noting that experts and scientists have said the coronavirus is going to be part of our lives for a long time, he asserted in his address that it is important to ensure that our lives do not revolve around it and asked people to work for their targets while taking precautions like wearing masks and keeping ‘do gaz doori’ (two-yard distance).
This was his fifth address to the nation, including a video message, during the coronavirus crisis.
Condoling the loss of lives to the rampaging virus, Modi spoke at length about the devastation it has wreaked on the world but infused his speech with a message of hope and resolve.
The prime minister said several bold reforms are needed to make the country self-reliant so that the impact of crisis such as COVID can be negated in future.
These include supply chain reforms for agriculture, rational tax system, simple and clear laws, capable human resource and a strong financial system so as to promote business, attract investment and further strengthen ‘Make in India’, he said.
Modi also recalled Gujarat government’s reconstruction work in Kutch following the devastating 2001 earthquake, and noted that the region was back on its feet against heavy odds through determination and resolve.
A similar determination is needed to make the country self-reliant, he said, adding that the world believes that India has a lot to contribute towards the development of the entire humanity.
The country has come a long way in the last six years of his government, he said, adding that the reforms brought in have ensured that the financial package for the poor was directly credited to their bank accounts during the lockdown. India is under a lockdown since 25 to contain the spread of coronavirus.
Modi said details about the fourth phase of lockdown will be given before May 18 after receiving the suggestions from states. “I am confident that by following the rules, we will fight coronavirus and move forward,” he added. (PTI)