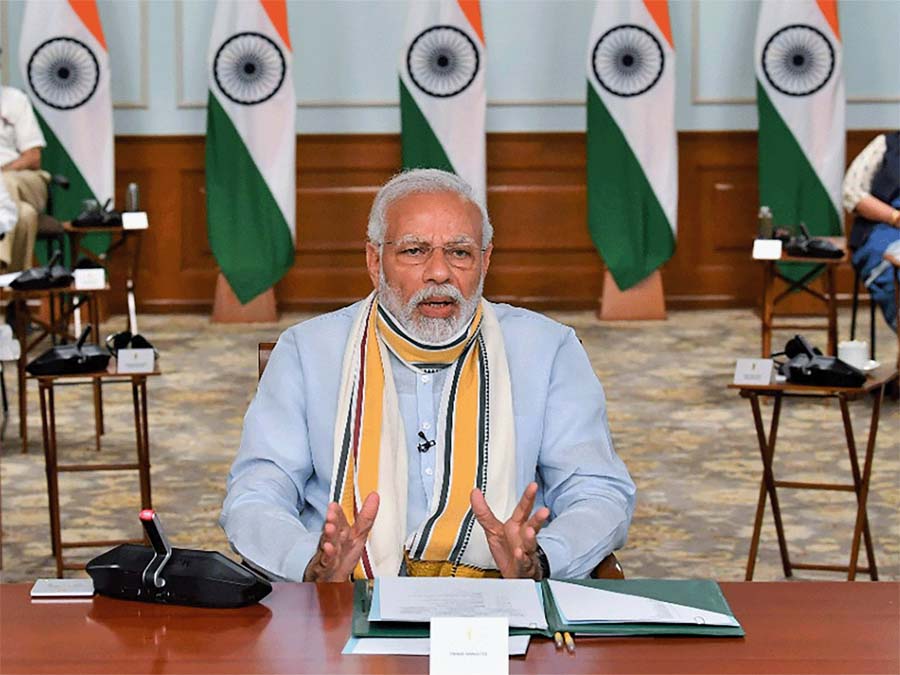 New Delhi, June 30: Prime Minister Narendra Modi on Tuesday announced extension of the Pradhan Mantri Garib Kalyan Anna Yojana (PMGKAY), a programme to provide free ration for over 80 crore people, mostly poor, by 5 more months till November end
In a televised address to the nation, the prime minister said over Rs 90,000 crore will be spent on the programme’s extension, and if the last three months expenditure on account of the free ration scheme is added then the total budget will be about Rs 1.5 lakh crore
The scheme was rolled out for three months from April soon after the nationwide lockdown was announced to combat the COVID-19
Modi noted that July marks the beginning of the festive season when people’s needs as well as expenditure increase
“Keeping all these things in mind, it has been decided to extend Pradhan Mantri Garib Kalyan Anna Yojana up to Diwali and Chhath Puja till the November end,” Modi said on the eve of the start of ‘Unlock-2’ for a graded exit from the national lockdown that was imposed on March 25. ‘Unlock-1’ ends on Tuesday
The prime minister said in his 16-minute address that the central government is also working on the “one nation, one ration card” initiative which, he added, will benefit people living outside their home for employment and other needs the most. This is Modi’s sixth address to the nation after the outbreak of the coronavirus pandemic
Underscoring the enormity of the free ration scheme, Modi said it covers two and half times the population of the United States, 12 times the population of the United Kingdom and double the population of the European Union
Each member of a family covered under the scheme will get five kilogram wheat or rice, and every family will get one kilogram whole gram per month as well.
Highlighting his government’s pro-poor measures during the lockdown, he said it had announced Rs 1.75 lakh crore package for the poor earlier, with Rs 31,000 crore transferred to 20 crore poor families under direct benefit transfer and Rs 18,000 crore given to nine crore farmers
The Union government, he added, is also spending Rs 50,000 crore for providing employment to people in rural India
With economic downturn caused by the coronavirus pandemic hitting employment across the country and millions of migrant labourers having returned to their native states, the extension of the free ration scheme is expected to provide succour to the poor
It is also expected to help the ruling BJP-led NDA in the poll-bound Bihar, which is home to a huge number of migrants and beneficiaries of the scheme
Modi also credited farmers and honest taxpayers for the government’s success in providing free ration to the needy and poor
While farmers produced enough grains, contribution from honest taxpayers has helped the poor coping with such a big crisis successfully, he said
“On behalf of all the poor of the country, I express my heartfelt gratitude to all the taxpayers and farmers, and also salute them. In the coming days, we will further strengthen our efforts and continuously work to empower the poor, downtrodden and deprived sections of society. While taking all the precautions, we will further expand the economic activities,” Modi said
The nation’s top priority during the lockdown was to ensure that no one remains hungry, and the Central government, state governments and civil society, all did their best, he added
The prime minister said his government will continue to work ceaselessly for ‘aatamnirbhar Bharat’
“We all will be vocal for Local. With this pledge and commitment, the 130 crore people of this country will have to work together and move forward together.”
Speaking on the coronavirus situation, he said India is comparatively in a better position compared to many countries of the world, as timely imposition of lockdown and other decisions have saved lakhs of lives
But, he also expressed concern that since ‘Unlock-1’ began there is an increasing “negligence” in personal and social behaviour
“Earlier, we were very careful with respect to wearing of masks, social distancing and washing of hands for 20 seconds. But today, when we need to be more careful, increasing negligence is a cause of worry,” he said. (PTI)