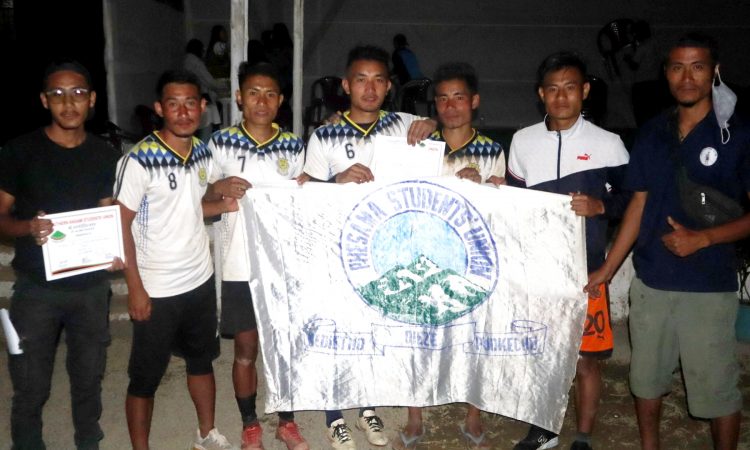 Players of Phesama Students' Union after winning the Futsal tournament here at Jakhama on Saturday.

Kohima, September 11: Phesama Students’ Union emerged as the champions of the first Open Futsal Tournament 2021 organized by Southern Angami Students Union (SASU) on Saturday evening.
The team defeated Soccer Club Kohima 4-2 in the final match played here at Jakhama Local Ground under Kohima district under the theme ‘Rise as one’.

The final match was a one sided match as Phesama took control of the game scoring twice in the first half. Despite a comeback from Kohima team in the second half, Phesama Students’ Union slotted another two to finished the game in their favor by 4-2.
On the way to the final, PHU outclassed Khüateke FC by 5-2, while Soccer Club defeated Adventure Club by a solitary goal in the semifinals matches.
Phesama Students’ Union, the champions received a cash prize of Rs 30,000, and the runner up Soccer Club pocketed Rs 15,000. The two semi-finalist i.e Khüateke FC and Adventure club was awarded Rs 3000 each.
Viluto Achumi (Soccer Club) who scored 15 goals in the tournament was awarded the highest scorer. While the best custodian was adjudge to Zakie (Soccer Club). Both received Rs. 1500 each. The player of the tournament was awarded to Theja Chuse of Phesama Students’ Union and received Rs. 2000.
A total of 48 teams from Southern Angami areas and Kohima competed in the two day sporting event vying for the coveted title.
Earlier, during the closing ceremony, PS to Medo Yhokha Advisor Technical Education & Elections Metekhriezo Patrick Khale graced the closing ceremony.
In his speech, he emphasized to the participants on the need to play as a team player to win which can also relate to our life as well. He said team work will help them achieve their goals and also build skills
“It is my message that we all try to live our life as a team where we can overcome difficulties in life” said Khale.
He also later gave away the prizes to the winning team on the occasion.

Also gracing the event, President, All Kohima Municipal Ward Panchayats (AKMWP), Thejao Sekhose recapped how Officers Hill Colony, also called as “Thegabakha” got its infamous name. He said that “Thega” stands for bear and “bakha” means land, which can also be termed as “an abode of the bears.”
He said that in modern times as the name of the colony “Officers’ Hill”, which implies a strong presence of officers, must continue to be a model colony for the rest of the 58 colonies under the 19 wards of Kohima.
(Page News Service)