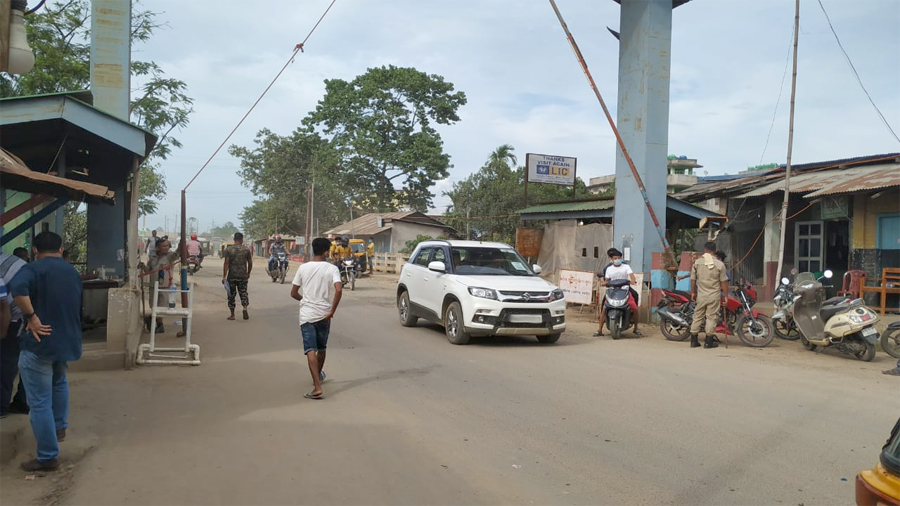 Page Staffer
DIMAPUR, SEPTEMBER 11: Passage of vehicles and people via New Field Check Gate, the busiest border check gate and entry point into Nagaland bordering Assam, continues without any restrictions even two days after the Nagaland Government issued revised guidelines for inbound travelers/returnees.
Nagaland Chief Secretary Temjen Toy had issued fresh SOPs on September 9 last directing all districts to screen returnees and other travellers entering the State at entry points. As per the fresh guidelines for the Unlock 4 phase, it is mandatory for inbound travelers to self-declare and register themselves, and report to the screening centres at the designated Points of Entry. Moreover, any person going out of the State and returning within 24 hours has to acquire movement permit from the District Task Force before the journey to avoid quarantine procedures. But personnel manning the New Field Check Gate and the Dillai Gate in Dimapur, are apparently unaware of the revised protocols.
On Friday afternoon, movement of people and vehicles from both the sides appeared unrestricted at the New Field Check Gate. A police personnel on duty said that they were just screening the drivers, conductors and handymen of buses and trucks entering Nagaland, adding that it would be a huge task for them to screen everyone crossing the gate. He also informed that no symptomatic cases have been detected during the screening process. In case any symptomatic case is detected, the person would be sent to the Screening Centre that has been set up adjacent to the gate.
The scene at Dillai Check Gate was different though with sparse movement of both people and vehicles. Talking to Nagaland Page, personnel manning the Dillai Gate informed they haven’t also received specific directives relating to the new SOP. Meanwhile they claimed that details of all persons entering the State are being noted.
DC, Dimapur, Rajesh Soundararajan, when contacted informed that a meeting of the District Task Force was held today and directives have been issued for the implementation of the revised SOP at the entry points and it should get reflected from September 12.
When asked if it was practicable to screen every person entering the state through the entry points, he said that it will have to be implemented and the Police will come up with a mechanism.
Meanwhile, people who are arriving at Dimapur by flight and train are now being given the option of home quarantine, instead of mandatory institutional or paid quarantine.
Since the Nagaland Government issued orders lifting restrictions on entry into Nagaland from September 1, there has been widespread confusion. Till September 8, those arriving at Dimapur by train or flight were being sent for mandatory quarantine, while there were no checks on entry into Nagaland by road at New Field and Dillai check gates.