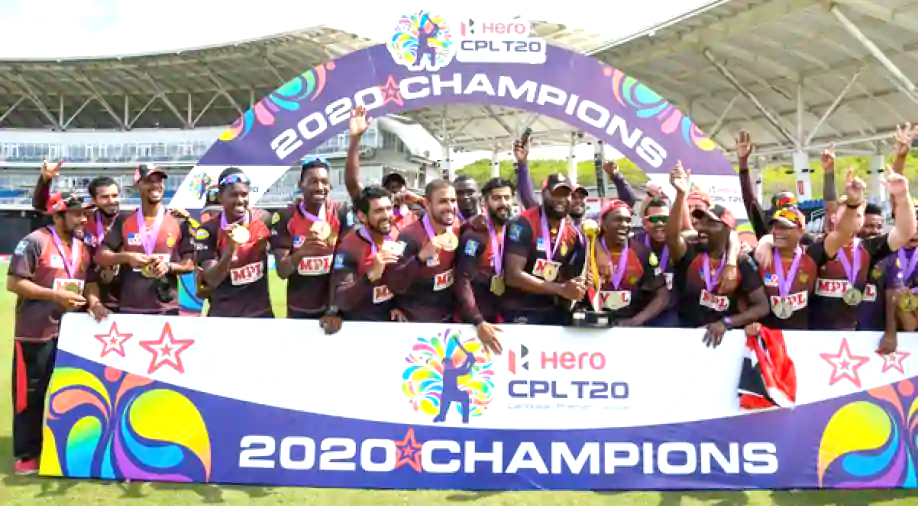 Tarouba, September 11: Lendl Simmons and Darren Bravo ensured Trinbago Knight Riders completed the first perfect season in franchise T20 history with an unbroken partnership of 138 off 88 balls, the highest of Caribbean Premier League (CPL) 2020 and the highest ever in a final. The St Lucia Zouks put up what seemed a competitive total, but ultimately a loss of 7/39 off the last 32 balls of their innings cost them dearly against this history-making Knight Riders squad.
Rakheem Cornwall swept Akeal Hosein for four but was lucky to edge over DJ Bravo at slip. Knight Riders captain Kieron Pollard gave the second over to Ali Khan, and Ali responded by flattening Cornwall’s middle stump. Andre Fletcher clipped fine for four, the Zouks thus closing the second over at 16/1.
Mark Deyal slog-swept Hosein for two fours, and Fletcher was aggressive against Sikandar Raza, taking him over cover and long-on for Hero Maximums then cutting for four. Khary Pierre went for just five, but Fletcher twice smoked Ali through cover for four and the Zouks motored to 60/1 off the Powerplay.
Deyal lofted Pierre over cover for four and launched Pollard for six, but struggled to combat Fawad Ahmed’s googly and edged to DJ Bravo at slip. Hosein returned with a tight over, and at halfway the Knight Riders had slowed the Zouks to 79/2.
Roston Chase clipped through midwicket for four early in Fawad’s second over, which went for 10, but Fletcher’s assault ended as he aimed Pollard down the ground but found only Darren Bravo at long-off. Najibullah Zadran slashed his first ball for four, and the over went for seven to leave the Zouks in need of a partnership at 79/3 off 12 overs.
While Chase slog-swept the last ball of Pierre’s over for a Hero Maximum, he and Mohammad Nabi fell within four balls, the former chipping a Pollard cutter to deep-mid on and the latter clubbing Fawad to long-off. Zouks captain Daren Sammy smashed his second ball for a Hero Maximum, and after 15 overs the Zouks were 123/5.
Despite a Najibullah four, Ali’s return over went for just six, and Sammy should have fallen to Hosein but Ali badly misjudged the catch. Najibullah flicked Hosein for a delightful Hero Maximum over cover, but Hosein recovered to dismiss Sammy LBW. After 17 overs, the Zouks were 138/6.
DJ Bravo was unable to bowl, and so Pollard had to step up at the death and did so admirably, picking up two wickets with his off-cutter. First Javelle Glenn looped to backward point, then Najibullah failed to clear Raza at deep backward square off another cutter. Kesrick Williams was run out, Ali Khan bowled Zahir Khan with a perfect yorker, and the Knight Riders had bowled the Zouks out for a decent rather than dominant total.
Simmons pulled Scott Kuggeleijn for four first ball of the chase, becoming CPL’s all-time leading run-scorer in doing so. Webster swept Nabi for four but then top-edged off Chase, Williams taking a fine catch. After three overs, the Knight Riders were 14/1.
Tim Seifert got off the mark with a four off Kuggeleijn, but fell edging behind next ball. Darren Bravo too got off the mark with a boundary, a glorious lofted Hero Maximum over long-on off Chase, and Simmons took fours straight, fine down the leg side and backward of point off Williams’ first over to close the Powerplay with the Knight Riders 40/2.
Chase and Nabi put the pressure on, going for just five between them, and Simmons and Bravo both struggled against Zahir. When Simmons did take on the big shot though he nailed it over the fence, and at halfway the Knight Riders were 59/2 and needed 96 more to win.
Sammy brought himself on and bowled five good deliveries, but Bravo smashed the sixth for a Hero Maximum, and Simmons pulled Williams for a six then cut him for four, becoming Hero CPL 2020’s leading run-scorer and bringing up his 50 off just 31 balls. Bravo though continued to struggle against Chase, who closed out a superb spell.
After 13 overs, Bravo was just 23 off 32 balls, and the Knight Riders needed almost 10 an over, but he eased both of those equations somewhat with two Hero Maximums off Glenn. Williams’s third over went for nine thanks to two wides and a loose short ball, and the Knight Riders entered the last five overs needing 45 with eight wickets still in hand.
Kuggeleijn managed to go for just four off the 16th despite starting with a wide, but Simmons targeted Zahir, taking him for four off the first and six off the second. Bravo added two big Hero Maximums, the second bringing up his 50 off 45 balls. Suddenly, the Knight Riders needed just 18.
Simmons was not going to hang around now, walloping Kuggeleijn for a Hero Maximum over midwicket then clubbing him over cover and slicing him through third man for two fours. The winning runs came off an inside edge, but there was now no denying the Knight Riders’ domination of Hero CPL 2020.
All season, the Knight Riders had absorbed the loss of key personnel – Colin Munro fractured his hand, Ali Khan missed games, Narine had kidney stones removed and was unable to play the final with a knee injury. But perhaps the 12th and final win is the greatest measure of how great a squad Pollard and Brendon McCullum have built – victory was achieved two wickets down, with 11 balls to spare, without DJ Bravo bowling or Pollard batting. The Knight Riders had come together in the bubble, and emerged from it to achieve something truly monumental. (Agencies)