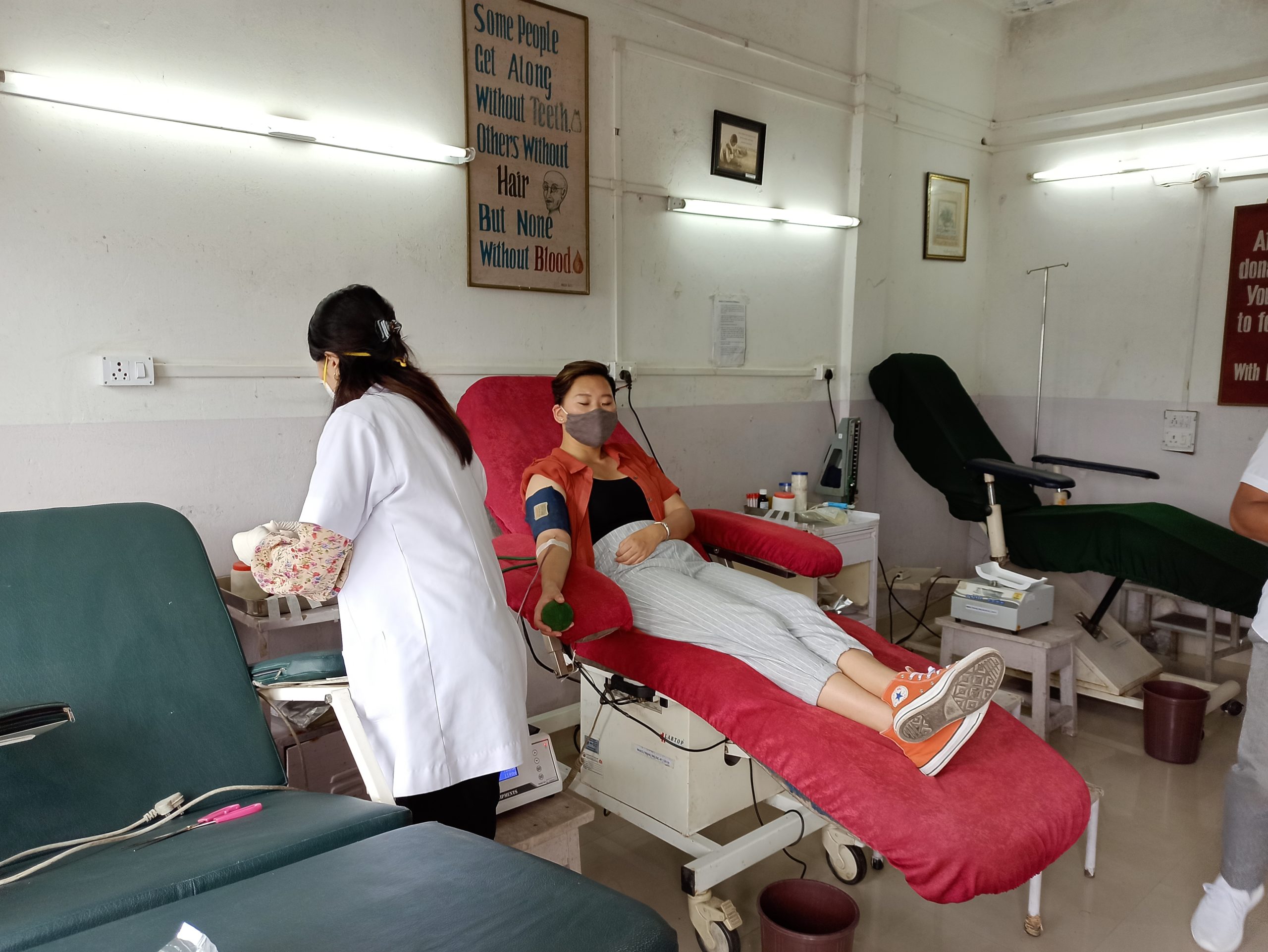 Our Correspondent
Kohima, October 1: MD, Transfusion Medicine, Dr Avila Sangtam today said the people in Nagaland are scared to come up to the blood bank because of the stigma surrounding COVID-19 even as there is a need for lot of blood in the blood bank.
Addressing blood donors at Blood Bank, Naga Hospital Authority Kohima (NHAK) on the occasion of National Voluntary Blood Donation Day, organized by Voluntary Blood Donors Association Kohima (VBDAK), Dr Sangtam said, “Even at this time of crisis, all of you have come together to fulfill one purpose which is to save a life. Around the world there are so many COVID patients even now who need blood and they cannot expect their relatives to come and exchange blood because all of them are susceptible. So at this time we need a lot of blood in our blood bank but again because of the stigma surrounding COVID-19 everyone is scared to come up to the blood bank.
The motivation to donate blood for Nuvelu Chuzho, one of the donors present at the Blood Bank (NHAK), was simple. “I want to help another person,” she said.
Chuzho, who is donating blood for the second time, said that she had plans to donate the previous years but could not make it happen since it conflicted with her travel schedule out of State. But now that she is back at home in Nagaland, her mind is already made up that she will donate after every three months.
Talking to Nagaland Page, Sangtam clarified on the myths and truths surrounding blood donation. “Donating blood isn’t good for health, it will make me weak, is a myth. Truth is whenever you donate blood, about 300-400 ml of blood is taken away but as long as you have a healthy diet it will replenish itelf in a short period of time. In fact, it reduces your chances of having a heart attack in the following months, Dr Sangtam said.
Another misconception that one will have to stay away from playing sports or other physical activities after donating blood is not, or that one might contract dangerous infections, like HIV, from donating blood is false, she said adding on the contrary donating blood will not affect your extracurricular activities. “In fact, after one hour of blood donation, you can resume normal physical activities, but refrain from strenuous work,” she added.
Sangtam said there is also this misconception that a woman cannot donate blood or that a person cannot donate blood since they are on medication. However, as long as a person meets the requirements, they can donate blood.
She said she can donate blood while still on medication. Medications such as oral contraceptive pills, vitamins supplements, painkillers, will not hinder your participation in donating blood. “However, if you are on antibiotics or psychotropic medication, you will have to be consulted,” she added.
Contrary to popular beliefs a woman can freely give blood while she is on period, she said pregnant women cannot donate blood, or a mother who is breastfeeding, she said.
She also mentioned that all blood donations are done with new sterilized needles, no needles are reused, which practically remove any risks of a donor contracting any virulent infections. While the fear of contracting other diseases is quite understandable, Sangtam mentioned that the only three licensed blood banks in Nagaland; Dimapur Civil Hospital, Naga Hospital Authority Kohima and Mokokchung Civil Hospital follow strict protocol in the sense that a person willing to donate blood is tested for five Transfusion Transmissible Infections such as: HIV (I), HIV(II); Syphilis; Hepatitis B; Hepatitis- C and Malaria. Therefore, there is no reason to be afraid while donating blood as long as you are doing it in a licensed blood bank.
Speaking on the sidelines of the Voluntary Blood Donation drive, Dr.Sangtam lauded the efforts of the VBDAK for coming forward to organize a blood donation camp at the Blood Bank, NHAK, for a week starting from May 18 through which they were able to accumulate 25 units of blood. Given the fact that it was a time when the pandemic was at its peak, the initiation by VBDAK could not have come at a better time as the supply of blood was running low at the hospital, Sangtam said.
Formed by like-minded voluntary blood donors in 2011, the Voluntary Blood Donor Association Kohima (VBDAK) has been initiated realizing the need to bridge the gaps of blood requirements in the District Level Blood Banks all over the state which is purely motivated by altruistic reasons, Chairman of VBDAK, Bendang said.
Since then VBDAK has been organizing blood donation camps in colleges and hospitals, he said.
Imsong said that the organization has also started to take the help of notable Naga personalities such as Alobo Naga, Methaneilie, and Mengu Suokhrie to give greater exposure to the movement, he said.
Imsong said that over the ten years of VBDAK’s existence, “we have noticed that youth make up the maximum number of donors followed by middle aged persons between 30-40 years.”